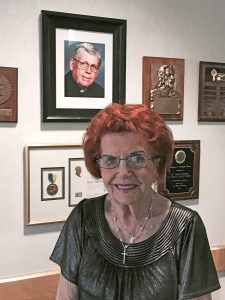 FORT WAYNE – Steel Dynamics Inc. co-founder Keith Busse will address graduates as the featured speaker at the University of Saint Francis commencement ceremony at 2 p.m. May 4 at the Allen County War Memorial Coliseum.

As part of the ceremony, longtime local volunteer Dottie Carpenter will be presented with an honorary degree. Carpenter founded the Ave Maria House, a day respite for the homeless, and continues to serve as director.
Busse, chairman of the board of Steel Dynamics, graduated from then-St. Francis College in 1973 with a B.A. degree in business finance. In 1998, USF honored Busse by awarding him with a Doctor of Humane Letters and in 2004, the university named the Keith Busse School of Business and Entrepreneurial Leadership in his honor.

Busse was Steel Dynamics president from 1993 to 2007, when he became chairman and chief executive officer. In 2005, he was named Steelmaker of the Year by the Association of Iron and Steel Technology and one of the Top 10 entrepreneurs in the United States by Bloomburg Businessweek magazine. He retired as CEO in 2011.

Carpenter assisted Father Tom O’Connor, the founder of St. Mary’s Soup Kitchen, in the early days of the ministry. She was involved in many other ministries over the years. She founded a clothing and household bank at St. Mary and St. Patrick Catholic churches and spent many years raising money as a participant in the St. Jude’s Children’s Hospital Bike-A-Thon. For more than 20 years, Carpenter taught religious education, led Girl Scouts and contributed countless hours to her children’s school activities.

Currently, at St. Mary, Mother of God Church, Carpenter serves the St. Martin de Porres Society, which provides Christmas gifts and Easter parties for more than 250 children. She also serves on the hospitality committee and the Women of Spirit prayer group. Carpenter serves during Mass as a lector and an extraordinary minister of holy Communion.