In the sometimes-merciless business world, devout Catholic executives need a way to blend their business skills and their faith: That was the vision of Domino’s Pizza magnate Tom Monaghan when he established Legatus 34 years ago as an alternative to secular groups such as Young Presidents’ Organization. Two chapters have been established within the Diocese of Fort Wayne-South Bend in the last 10 years, and they continue to help business leaders and their spouses grow in their Catholic faith and carry that faith into the workplace.

On June 30, Bishop Kevin C. Rhoades paid a visit to the joint meeting of the two chapters and celebrated Mass with them at St. Martin de Porres Church in Syracuse.

Rather than separating their faith from their business practices, Legatus allows company presidents, CEOs and business leaders who meet specific criteria to follow Christ more closely in all areas of their life through fellowship with like-minded Catholic businesspeople. Nate Wine, vice president of the Legatus Great Lakes Region, describes the organization’s mission as to “study, live and spread the Catholic faith in our professional and personal lives.”

Wine took up his position at the start of the year. He said that he has been “personally blessed by this role” and is “humbled to serve” an organization that bolsters his faith life.

Since its inception, Legatus has grown to over 100 chapters in the U.S. and Canada, with more slated to be chartered by the end of the year. Over 5,000 members have committed themselves to merging their Catholic faith with their business practices.

Unlike other leadership organizations, Legatus spouses can become members and are invited to take an active role in all aspects of the organization.

Both the Fort Wayne and South Bend-Elkhart chapters host monthly meetings that include praying the rosary, reconciliation opportunities and Mass before dinner, after which a Catholic speaker addresses the group. Speakers can be anyone from renown Catholics to local parish priests. Wine stated that the purpose of the talks is “to challenge and inspire” members of Legatus in their faith journey.

In addition to monthly meetings, Legatus offers small-group forums for both men and women to support each other and discuss their “personal and professional struggles,” Wine said. Members are encouraged to participate in network groups within their professional specialties.

A three-day, nationwide Legatus summit will take place this September in Scottsdale, Arizona, providing further opportunities for members to grow in their faith. Legatus also offers guided pilgrimages to religious sites such as the Camino de Santiago Compostela in Spain and the Holy Land.

Once a year, the Fort Wayne and South Bend chapters have a joint meeting, and this year Bishop Rhoades was welcomed as guest speaker. There was much merriment as members from both sides of the diocese shared fellowship at the social hour prior to the dinner. 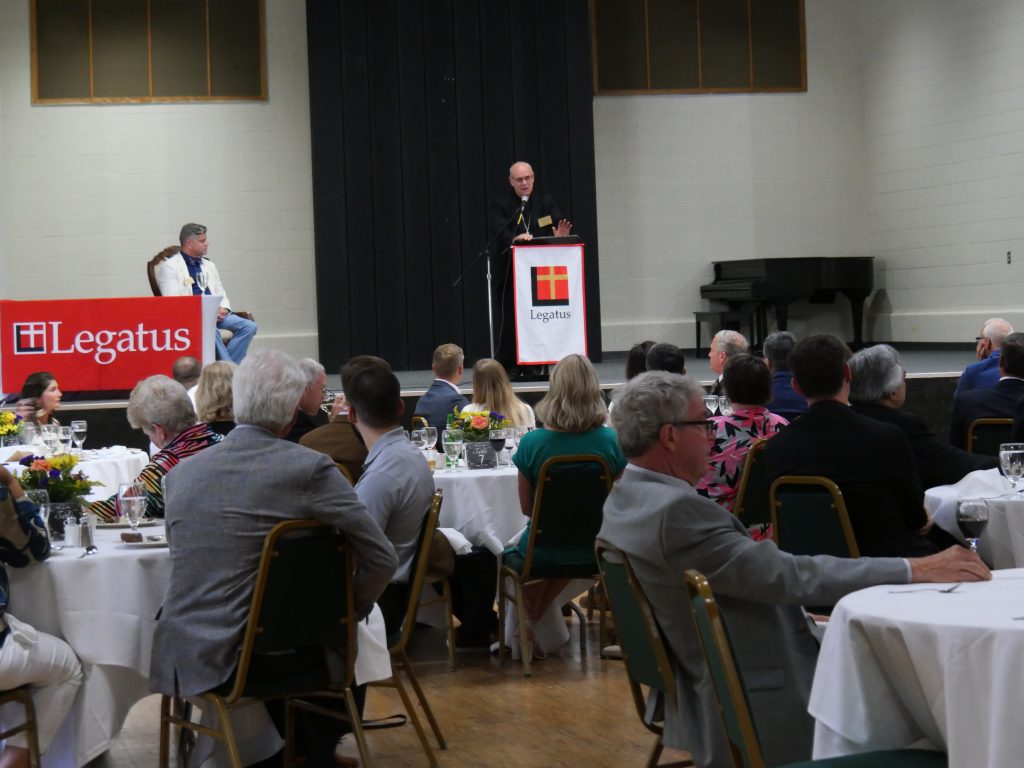 In lieu of a prepared talk, group members had been asked to submit questions for a Q-and-A session with Bishop Rhoades. Some of the questions covered Church teaching on the sacredness of the Eucharist and issues of human sexuality, how to keep young people engaged in the Church and ways that members of Legatus can support the priests in their communities.

Bishop Rhoades advocated active participation in parish life, adding that priests and bishops do not often have backgrounds in economics and greatly benefit from the talents of those who do. He also expressed a positive outlook on the strong faith of many young people within the diocese.

Jay Mattern, South Bend, and Chad Wright, Fort Wayne, are serving their respective chapters in a one-year term as president for 2021. Though the pandemic discontinued meetings for a time and decreased the number of members, both chapters are going strong this year.

South Bend membership is at 20 couples with some “really good prospects” for new members, according to Mattern. The Fort Wayne chapter is up to 38 couples.

“We’re definitely looking for additional Legatus members; the Fort Wayne and South Bend chapters are all very, very strong and part of it is because we have a very strong leader in Bishop Rhoades,” said Wright. 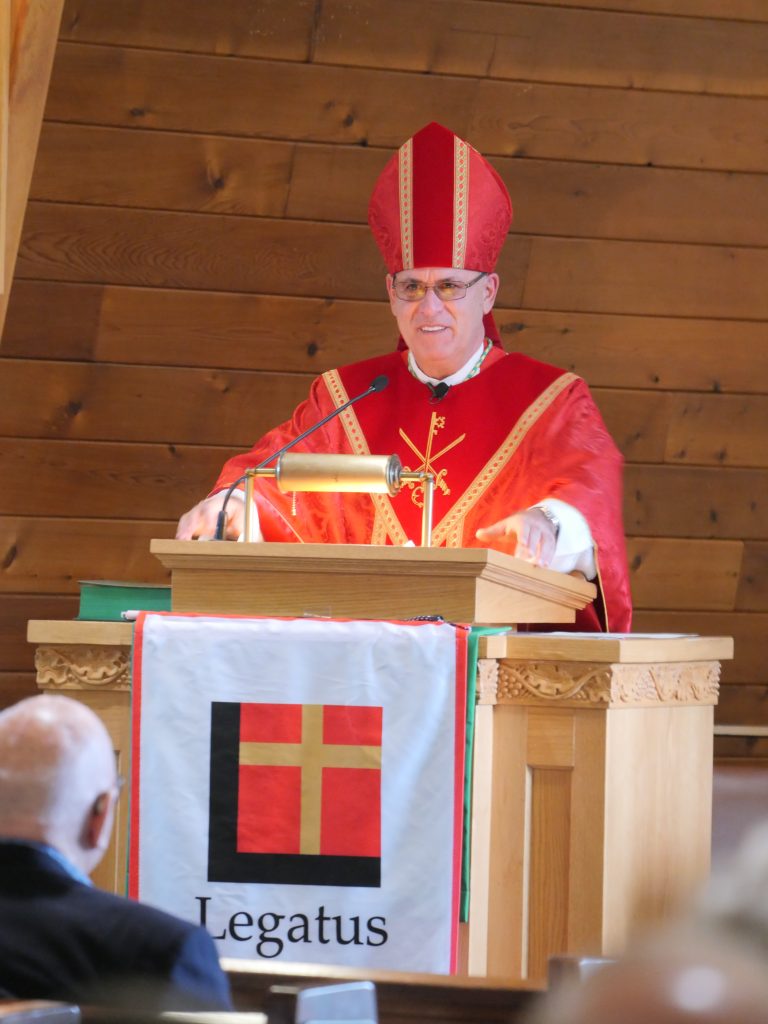 In his homily at Mass, Bishop Rhoades delved into one of his favorite topics: history, particularly the history of the early Church, as the day marked the memorial of the First Holy Martyrs of the Holy Roman Church. Speaking of these martyrs, he remarked, “What is amazing is that their martyrdom did not stop Christianity’s spread. In fact, evidence shows that many Romans were inspired by the courage of these martyrs and converted to the Christian faith.”

He elaborated on the day’s reading from St. Paul’s letter to the Romans and the Gospel, where Jesus told the disciples that they would encounter persecutions and trials, but assured them that He would be with them and bring about the “ultimate victory of His love.”

“The message for us today is clear. The words of Jesus and of St. Paul are a call to courage. They are words of encouragement for us today to remain loyal to Jesus and His Church in the face of opposition. Our Lord did not conceal from the disciples that evil will lash out against them, nor did He promise them a life without suffering. Yet, He assured them, and He assures us, of the ultimate victory of His love. For the suffering Church on earth, persecution will give way to ultimate joy.”

He concluded his homily with words that Legatus members could reflect on in their everyday lives, amid a culture that is frequently hostile to visible acts of Christianity.

“The martyrs now live in eternal joy and peace with the Lord. … We need their prayers, that we may persevere in faith with fortitude and courage, trusting always that nothing can separate us from the love of God in Christ Jesus our Lord.”

As an owner of a private business that employs 150 workers, Wright recognizes that he has “a pretty big pulpit” for spreading the Gospel and believes that organizations like Legatus are the impetus from which the Catholic revival will burst forth. At his workplace, he stated that “before meals, we pray. Before board meetings, we pray.” He does not shy away from talking about his Catholic faith in the workplace and serves as a witness for Christ in that way.

Mattern, a parishioner at St. Jude, South Bend, owns two marketing firms. When he came into the Church in 2019, he was running a staffing business and fervently wanted to find an organization that would support his newfound faith. Legatus was a perfect fit. “I’m really happy I did because it’s just fantastic,” he commented. 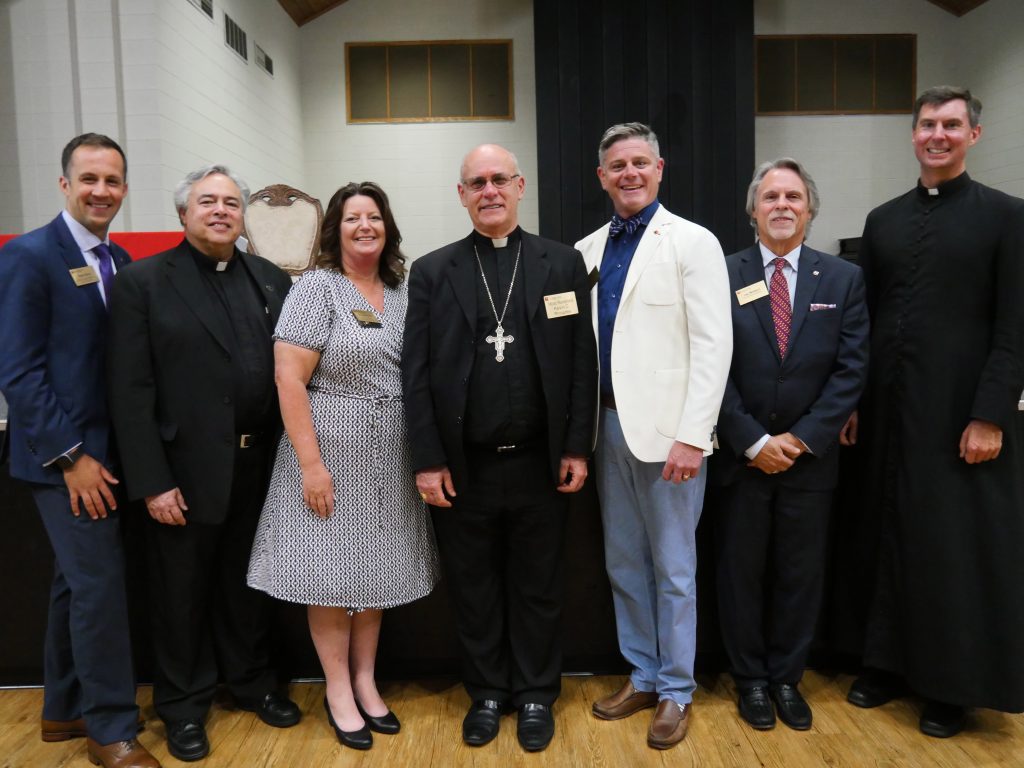 During the meeting, Father Jim Fenstermaker transitioned into his new role as chaplain of the South Bend chapter. It was his first meeting, and he concelebrated Mass with Bishop Rhoades. Father Daniel Scheidt serves as the Fort Wayne chapter’s chaplain. At the end of the evening, the combined chapters presented Bishop Rhoades with a check for $1,000 toward the charity of his choice.