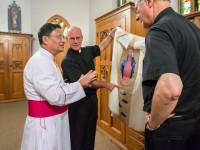 Conference attendees arrived in Fort Wayne early in the evening on Aug. 30, and gathered for dinner. Confessions were heard by Father Bernard Taylor before the evening drew to a close.

The conference program began early the next morning, Saturday, Aug. 31, when close to 1,000 Burmese-American Catholics, from across the country and as far away as Australia gathered at Bishop Dwenger High School for breakfast and morning prayer by Master of Ceremonies Father Peter Dee De, part-time associate pastor at the Cathedral of the Immaculate Conception. The 80 Burmese Catholics registered in the Diocese of Fort Wayne-South Bend were in attendance as well. Conference attendees were welcomed with a presentation on youth activities and a special youth dance.

Keynote speaker and Mass celebrant Archbishop Charles Bo, of the Rangoon Diocese in Myanmar (formerly known as Burma), joined the throngs of Burmese-Americans gathered to enrich their faith and connect with others. The day was laced with cultural music and prayer, talks for youth and adults, and participants took advantage of the opportunity for Eucharistic Adoration, rosary recitation and Confession.

The archbishop spoke to the assembly in the morning before the 11 a.m. Mass about values that included identity, trust, gratitude and love. His afternoon talk drew attention to the “Year of Faith” instituted by Pope emeritus Benedict VXI in Oct. of 2012, and the challenges Burmese-American Catholics face regarding faith, unity among themselves and mutual support. He also encouraged the faithful to give attention to tithe — to offer to God, time, talents and treasure. 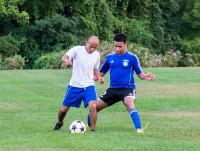 Father Peter Dee De, left, a Burmese priest serving as part-time associate pastor at the Cathedral of the Immaculate Conception in the Diocese of Fort Wayne-South Bend, plays in the eight-team men’s soccer tournament during the conference.

Archbishop Bo is cognizant of the struggles this assembly has experienced in their migration to and resettlement in the U.S. Speaking to Today’s Catholic before the conference the archbishop said, “They themselves face a terrible culture-shock and many find it hard to adjust.” He cited challenges such as lack of education, home-sickness, lack of stamina for resettlement and the language barrier.

Archbishop Bo commended the U.S. assistance to his people, saying, “The local Church in Fort Wayne is trying its best to take care of the migrants and resettlement. Since our Burmese Catholics have to start from zero, I think it would need much time and attention to do it enough. We thank the American leaders and clergy they offered.”

Men’s soccer and women’s volleyball games were organized in the afternoon in the gym of Bishop Dwenger’s campus and the Hefner Soccer Complex at IPFW, where Father Dee De said catechism was taught to the participants. His hope is that the Burmese-American Catholics gathered will learn more about the Year of Faith and share that faith with others. “Faith is a gift and has to be lived out and shared wherever we are, no matter how difficult the situation is. … The other thing is … to urge them to participate in the life of the parish they belong to,” he said.

On Sunday, Sept. 1, the day began in earnest with song and prayer followed by a talk on the New Evangelization by Archbishop Bo. Mass was celebrated by Bishop Kevin C. Rhoades, with interpreter Father Nico, in the Cathedral of the Immaculate Conception in downtown Fort Wayne, where in his homily Bishop Rhoades spoke to the standing room only congregation of the deep and humble faith of Burmese Catholics. “I have been edified by the faith and humility of the Burmese Catholics in this diocese. They learned this path of faith and humility, the path of Jesus, back home in Burma,” he said.

Bishop Rhoades told the congregation, “The Burmese-Catholic community in our country, and here in Fort Wayne, is truly a blessing for the Church in the United States.” He went on to encourage them to share their faith with others, saying, “The Church’s mission of evangelization needs your witness and your active participation. I encourage you to be involved in the life and activity of your parishes and dioceses throughout this country.”

Bishop Rhoades spoke of the commonality the faith affords its faithful. “Though there are language and cultural differences between you and the American community, our common Catholic faith unites us and unites you with your Catholic American brothers and sisters. I encourage you to recognize your gifts and talents and to use them for the building of the Body of Christ, the Church, here in the United States.”

He continued, “I hope that you have felt at home in the Catholic Church here. … We are all brothers and sisters from different races, nations, cultures and languages. The Church is one — we are one Body in Christ. This unity is stronger than any differences among us.”

Bishop Rhoades also announced that he had accepted Hang Suan Piang (John), the first Burmese man as seminarian for the diocese who served at the cathedral Mass.

Following Mass Deacon Swan thanked Bishop Rhoades for his participation in the conference and presented him with a gift of a chasuble that dipicts Mary, the Immaculate Conception.