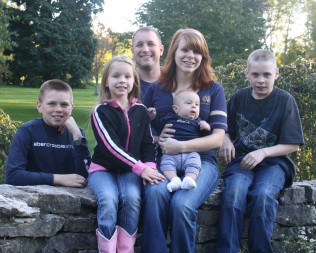 The Barton family includes from left, Michael, Felicity, dad, Aaron, in back, mom, Jennifer, holding baby Raphael, and Andrew. The family has found a welcoming Church home at St. Therese in Fort Wayne for their special needs.

FORT WAYNE — For the Barton family, Aug. 24 was a very special day. Not only did they witness the Baptism of their youngest son Raphael, but the reception of first Communion by their middle son Andrew as well. Witnessing the two sacraments in one day would have any Catholic family celebrating, but with the challenges that autism has brought to Andrew’s life and faith formation, the Bartons literally rejoiced in the moment.

Andrew’s family, which includes dad Aaron, mom Jennifer, big brother Michael, little sister Felicity and baby Raphael, recently moved back to their hometown of Fort Wayne after moving around the country in active military service. They are grateful to have found a welcoming church home for their special needs at St. Therese Parish.

With the help of Jane Sandor, co-director of the Office of Catechesis in the Diocese of Fort Wayne-South Bend, the Bartons found the appropriate resources to help Andrew adapt to life in the Summit City. Not long after, Jennifer found herself accepting an invitation to sit on the newly formed Disabilities Advisory Board.

Andrew was born in Virginia in 2002 and his parents felt something was different about him by the time he was two, noting that their precious son played in different ways, lining up his cars and repeatedly spinning objects.

“We went to the doctor because he didn’t respond to his name. They checked his hearing and then it hit us,” says Jennifer. Therapies in preschool assisted with early intervention, though the diagnosis of severe autism wasn’t made until Andrew was six years old.

All the while as the expanding family moved with its military duty, Andrew adjusted to each move, says his dad, who adds that military resources helped immensely. And in every city they found themselves, the Bartons sought a welcoming Church community. It was in Utah, at St. James Church that the family found their spiritual home and soon was approached by its pastor about Andrew receiving the sacraments.

While considering how their son would be able to participate in religious education, Jennifer was given information on an adaptive first Communion kit for those with special needs, and after investigating the “Adaptive First Eucharist Preparation Kit for Children with Autism and Other Special Needs,” published by Loyola Press, and written by Eagle Scout Brendan Rizzo whose sister is challenged by autism, St. James Parish purchased the kit for the Bartons’ home use.

Aaron worked with his young son to help him understand what the Eucharistic sacrament meant. “We worked at home to make him understand it wasn’t just food, but something special. Father Eric gave us unconsecrated hosts. Drew was very receptive,” he says.

With faith formation undertaken in Utah, it didn’t take Andrew long to prepare for the day of his first Communion once the family settled in Fort Wayne after their most recent move. “Father Lawrence (Teteh, pastor of St. Therese) was good about working with Andrew to have what he needed,” says Jennifer, adding that the entire family joined Andrew at the altar that special day to receive his first Communion.

Aaron continues to use one tool in the adaptive kit with Andrew whenever they attend Mass. The flipbook with simple drawings of each part of the Mass allows Andrew to follow the events as they happen and know what to expect. “It helps him to know we’re moving along,” says Aaron.

During last year’s Mass for the Disabled, celebrated by Bishop Kevin C. Rhoades, the Bartons were deeply moved when the bishop asked to meet Andrew after Mass. Bishop Rhoades gave Andrew a blessing and told him he would like to confirm him. “Drew will be making his Confirmation next summer,” beams Jennifer.

As Andrew’s mother, Jennifer says, “We have to be his advocate. We have to look at him as God has made him.”

Aaron agrees, adding, “Autism is only part of who he is.”

The two have taken to consecrating Andrew to Jesus through Mary since participating in the diocesan wide Marian consecration held Aug. 15.

“Our faith is a huge help,” admits Jennifer, “Without it we couldn’t be where we are.”

The Bartons look to the future with hope. “We’ve learned not to give up hope,” they say. “We thought he wouldn’t ever make his first Communion. So we’ll keep trying. … We want to make sure he’s taken care of and accepted. Acceptance is one of the biggest hopes for him.”

Acceptance is their biggest hope for the future of the Catholic Church as well. “We want the Church to move forward with education with people like Drew,” they say.

Aaron offered these suggestions for the parishes in the diocese: “How do we include people in Mass? Ushering, taking the gifts up.” He relayed how in Utah his parish priest made periodic pulpit announcements to heighten awareness of those with special needs.

Having been on the disabilities board has given Jennifer an outlet through which to advocate for the many needs in the Church. “I think everyone has a special need. We’re all in a different place on our journey. … The board is working to get advocates from each parish to tell the board what they need.

Jennifer wants to spread the word that there is hope right here in the diocese. “The board is so necessary. I wish more people knew about it and that they don’t have to hide their disabilities. It’s important that people know your kids are not acting up — they just can’t sit or take the noise.”

In the past year, Jennifer notes, the board has broken into subcommittees to focus on different aspects of need at the parish level and in the diocese overall.

“It’s a long process with so much to be done,” Jennifer says. “Bathrooms, right language and the hope that the kids can do the sacraments and be part of the community. How we can reach out to others and link them.”

“Drew was given to us for a reason. It’s hard, but God always gives us what we need,” concludes Jennifer.