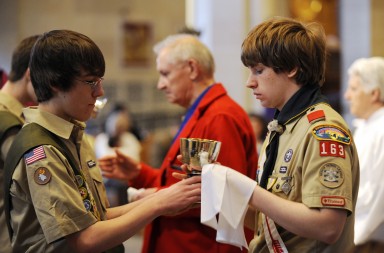 Boy Scouts serve as extraordinary ministers of Holy Communion during a Catholic Scouting recognition Mass in 2010 at Sacred Heart Cathedral in Rochester, N.Y. The Boy Scouts of America voted May 23 approved a resolution that states, “No youth may be denied membership in the Boy Scouts of America on the basis of sexual orientation or preference alone.”

I  have received a number of inquiries about the recently approved resolution of the Boy Scouts of America which states the following: “No youth may be denied membership in the Boy Scouts of America on the basis of sexual orientation or preference alone.” Scouts, Scout leaders and parents, and others have asked me my position on this change and whether or not our parishes will be allowed to continue sponsoring Boy Scout troops.

When it comes to our young people, we must be ever vigilant in their Christian moral formation and upbringing. This is a responsibility primarily of parents. It is also a responsibility of the Church, our teachers, and our youth leaders. We are responsible for their training in virtue, including the virtue of chastity.

If a young person is experiencing same-sex attraction, we must reach out to him/her with love and support, and help him/her not to feel isolated or alienated. Such young people need special encouragement and guidance so they are not drawn into an immoral lifestyle. They need family support, good friendships and a strong spiritual life in order to live a healthy, chaste, and holy life. Most importantly, they, like all of us, need the support of the Church’s sacraments, which heal, strengthen, and enable us to live the demands of the Gospel.

The Church teaches that men and women who have homosexual inclinations “must be accepted with respect, compassion, and sensitivity. Every sign of unjust discrimination in their regard should be avoided” (CCC 2358). The Church also teaches that “homosexual persons are called to chastity” (CCC 2359).

The Boy Scouts of America has publicly stated that any sexual conduct, whether homosexual or heterosexual, by youth of Scouting age is contrary to the virtues of Scouting.

The change in the Boy Scouts’ membership standard, in itself, does not seem to me to be in conflict with Catholic teaching. However, what is critical is the way in which it is understood and implemented. While the Church teaches that homosexual acts are sinful, it distinguishes between engaging in homosexual acts and struggling with homosexual inclinations. The experience of same-sex attraction, having a homosexual tendency, while disordered, is not in itself sinful. Regardless, every human person is called to live chastely; this is true regardless of sexual inclinations or attractions.

The way many in the media, both secular media and some Catholic media, have reported the change in the Boy Scouts policy has been confusing. For example, many have reported that the Boy Scouts are now accepting “openly gay scouts.” Nowhere have I seen that language used by the Boy Scouts of America. The language, as quoted above, mentions non-denial of membership based on sexual orientation. The use of the term “openly gay scouts” gives the impression of a scout who embraces the experience of same-sex attraction as if it defined his identity and who promotes a gay lifestyle. I don’t think that is what the resolution means.

As the new policy currently stands, I see no reason to prohibit our parishes from sponsoring Boy Scout troops. At the same time, it is critical that we be vigilant on how this new policy is interpreted and implemented.

It is important also that persons with a homosexual inclination know that the Church is here to help and support them in living as chaste disciples of Jesus, and not feel alienated from the Church. That is why our diocese has Courage chapters in both Fort Wayne and South Bend. There are active Catholics in our diocese who experience same-sex attraction and live in accord with Church teaching. They are bearing witness to Christ and living their faith in the midst of a culture that is telling them to forsake the teachings of the Church and to act on their homosexual temptations. But they strive to live in chastity and have embraced the call to holiness. With the help of God’s grace, they are living good and holy lives.

I hope that the new Boy Scouts policy does not lead to encouraging young people to define themselves primarily in terms of their sexual inclination. Our young people should be taught to define themselves primarily in terms of their identity as beloved children of God, created in His image and likeness. Our fundamental orientation is toward God, and is not reducible to sexual inclinations, however powerful they may seem. They should also see themselves as beloved members of the Body of Christ, the Church.

The National Catholic Committee on Scouting is cooperating with the Bishops of the United States and relates to the USCCB through a Bishop Liaison, Bishop Robert Guglielmone. They will be studying the details of the application of this new resolution of the Boy Scouts of America over the coming months. The membership resolution is scheduled to be implemented on January 1, 2014. The NCCS and Bishop Guglielmone will keep the Bishops informed on this matter.