It’s good to have new biographical works of two women saints: St. Clare of Assisi and St. Therese of Lisieux. Both are famous saints to Catholics, but there is limited knowledge of them outside the Church. These publications may correct that.

Eight hundred years separate the lives of these two women. Clare lived in the 12th and 13th centuries and Therese in the 19th.

But both sought the religious life early, both had no interest in following the standard roles of women as wife and mother, and both practiced forms of self-mortification and self-denial that make us uncomfortable to hear about in the 21st century. We no longer believe that extreme fasting and sleeping on beds of twigs makes us dearer to God.

Bret Thomas’ “St. Clare of Assisi” is not a biography, as the author openly states in the preface. Some parts of St. Clare’s life are well-documented, but there are other parts where there is no record. Consequently, the author has imagined scenes and thoughts from her life, so “St. Clare of Assisi” bears greater resemblance to an historical novel than a biography. It is, nonetheless, a lively and informative read.

Clare, born into a wealthy noble family of Assisi’s upper class, had an early sense that the life of an arranged marriage and child rearing was not for her. She got to know Francis, who became St. Francis, from an early age in Assisi. She was attracted to his preaching and dedication to a life of poverty that imitated the life of Christ. When she turned 18, she sold off her possessions and gave her inherited money to the poor.

On Palm Sunday in 1212, Clare escaped by night with the help of a sympathetic servant. Several miles from Assisi, she met up with Francis and some of his followers. That night she was given her tonsure by Francis, her hair was cut short and she was dressed in a rough woolen tunic.

Her family traced her and demanded that Clare return to Assisi with them, but she refused. Henceforth, she would dedicate her life to living in a community of women in poverty.

Three years after her escape, when she was 23, Clare was declared the abbess of San Damiano. Clare recognized that the women who became her followers could not lead an itinerant life, begging for alms as Francis’ followers did, so she established a stable community and would create other communities led by other women.

But that did not mean the “Poor Clares,” as they became known, lived in comfort. All the women slept in one large room on hard mats; Clare herself slept on a bed of sticks. The rigors of poverty and sustained fasting undermined Clare’s health and she would live for many years confined to her bed. Despite the toils she exacted on her body, Clare still lived over 60 years, a very advanced age in the 13th century. 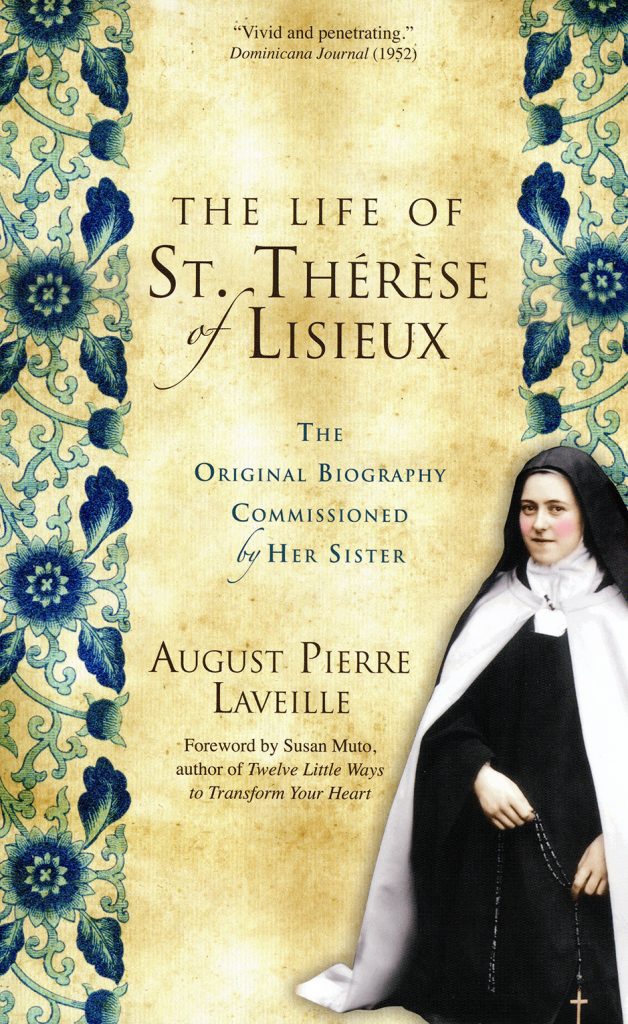 This is the cover of “The Life of St. Therese of Lisieux” by August Pierre Laveille. The book is reviewed by Graham Yearley. (CNS)

August Pierre Laveille’s “The Life of St. Therese of Lisieux” is a biography, but not a new one, as it was published originally in 1925. Laveille’s work was commissioned by Therese’s own sister Pauline, who also had been her prioress in the Carmelite order. Eventually, all four daughters of Louis and Zelie Martin would join the order.

One could say the four girls got their call to the religious life directly from their parents. Louis Martin had wanted to be a monk; Zelie had wanted to become a saint. They lived as a married couple in harmonious celibacy. It was a priest who pointed out to them that bearing children was a natural and holy vocation, too. The couple would take that advice to heart and bear nine children, but only four survived to adulthood, all girls. Therese was the youngest.

The first great crisis was her mother’s death when Therese was 4-1/2 years old. From then on, Therese was raised by her sister Celine. Her second crisis came when Celine joined the Carmelites several years later.

Her sister’s departure, however, only intensified Therese’s desire for the religious life. At 15, she asked the prioress of the Carmelite convent in Lisieux if she could be allowed to enter and she was refused. She went to the local bishop and asked again and was refused again. Both wondered if the beautiful but delicate Therese could withstand the rigors of religious life.

After Therese eventually received permission to join the order, her joy was evident, but further trials would await her. Therese would be told that as she had two sisters who had taken their final vows, she would have to remain a novice, junior in both age and status.

But it was within the walls of the convent that Therese began thinking and living out her “Little Way,” a pathway toward holiness though prayer and self-denial and self-debasement.

Being “little” in God’s world was not something to be resented, but accepted joyfully. The smaller we are, the greater the gift of God’s love becomes, in Therese’s view. If one was accused falsely of a mistake, take the blame anyway; refuse lighter work and insist on doing the humblest jobs. As her health declined, partly because of sustained fasting, her superiors asked Therese to write down her spiritual discoveries.

What emerged as “The Story of a Soul” began as an exercise in humility, with no thought of publishing her diaries or other written works. In her final months of dying of tuberculosis, she endured agonies of pain, but Therese seemed to respond with gratitude that she was nearing death and would be joined with God.

It was reported after she died Sept. 30, 1897, her face, which had been contorted with pain, suddenly transformed into a face filled with beatific ecstasy.

While Therese’s life is a fascinating one, this first biography is essentially hagiography, uncritical and overly reverential. The style is so syrupy one feels like one is drowning in caramel. It is a pitfall that is hard to avoid when one is dealing with lives so extremely and heroically dedicated to serving God.

Yearley writes for Catholic News Service. He is pursuing a doctorate of ministry in a joint program sponsored by Ashland Seminary in Ashland, Ohio, and the Ecumenical Institute at St. Mary’s Seminary and University in Baltimore.