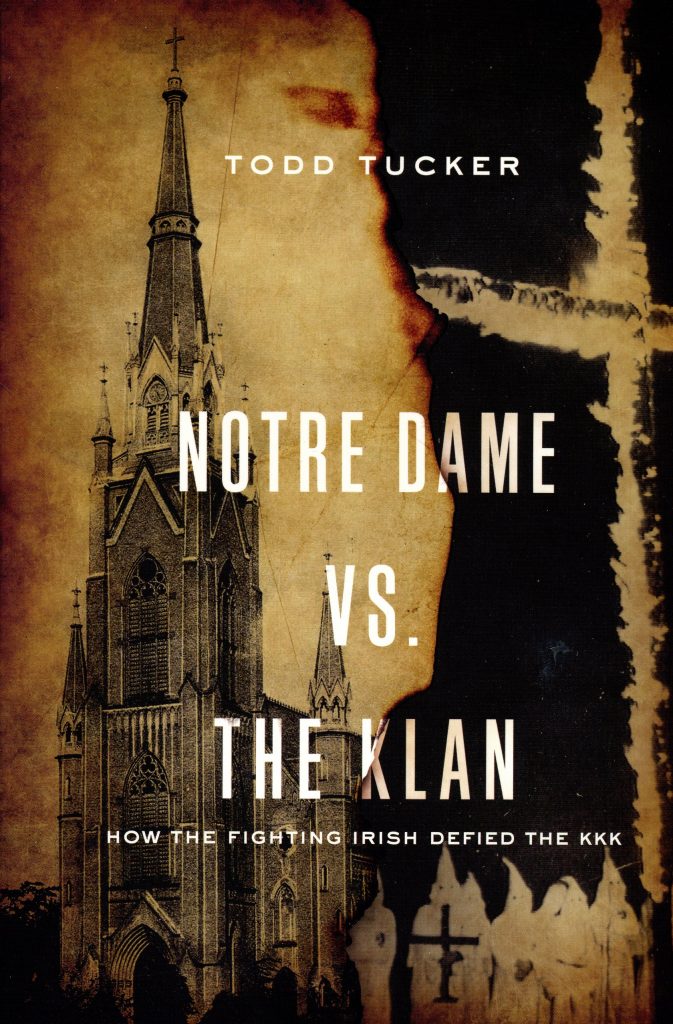 This is the cover of “Notre Dame vs. the Klan: How the Fighting Irish Defied the KKK” by Todd Tucker. The book is reviewed by Eugene J. Fisher. (CNS)

This excellent book will engage Catholic readers with the history not only of University of Notre Dame but also of the anti-Catholicism that prevailed in much of America up to and even after the World War II.

It centers on a violent clash between the students of the university and a much larger group of members of the infamous Ku Klux Klan in South Bend, Indiana, in 1924.

The KKK is usually remembered as a Southern group, primarily involved in suppressing African-Americans freed from slavery after the Civil War. Its incursion into Indiana, and the fact that it represented the views of a majority of Indianans, to the point that most of the political leaders of the state were members or sympathizers of the Klan, is less well known.

The three Ks stood for, if readers will excuse this vulgar language, Koons (African-Americans), Kikes (Jews) and Katholics. The Klan welcomed as members all native-born, white, Protestant, gentile males. Catholics and Jews, of course, were the immigrants of the time who were seen by many as a threat to the WASP (White Anglo-Saxon Protestant) “purity” of America. The racial bigotry of the Klan, of course, mirrored the anti-Semitic racial bigotry then rising in Germany in the wake of World War I.

When the Klan in 1924 announced that it would stage a major march through the streets of South Bend, students of the university, not heeding the advice of the university faculty that they should remain on campus, mobilized and marched into South Bend to confront those who sought to intimidate them. A violent clash was inevitable, with the Klan ultimately routed.

Author Todd Tucker centers his gripping narrative on three people: D.C. Stephenson, the Klan leader who organized the march; Father Matthew Walsh, then president of the university; and a representative student, Bill Foohey.

Tucker begins with the founding of the school in the early 1840s and its often-painful development as a Catholic institution in an area dominated by Protestants. He sets the story in the context of the larger history of American Catholicism. He features the importance of D.W. Griffith’s racist movie, “The Birth of a Nation,” in 1915, and its popular success, as precipitating the revival of the KKK and its spread around the country, North as well as South.

He describes the slow growth of Notre Dame over this same period, with the “immigrant” Catholics and the “native-born” Klan members both rising in prominence, to the point where the university became a symbol for the Klan of the “threat” posed by Catholic immigrants to the WASP nature of the “true” America.

The university survived the Klan’s attack and the anti-Catholicism of the period, as Tucker narrates, to take its place as one of America’s leading institutions of higher learning. This uplifting story gives hope in our own challenging times.

Eugene Fisher is a professor of theology at St. Leo University in Florida.