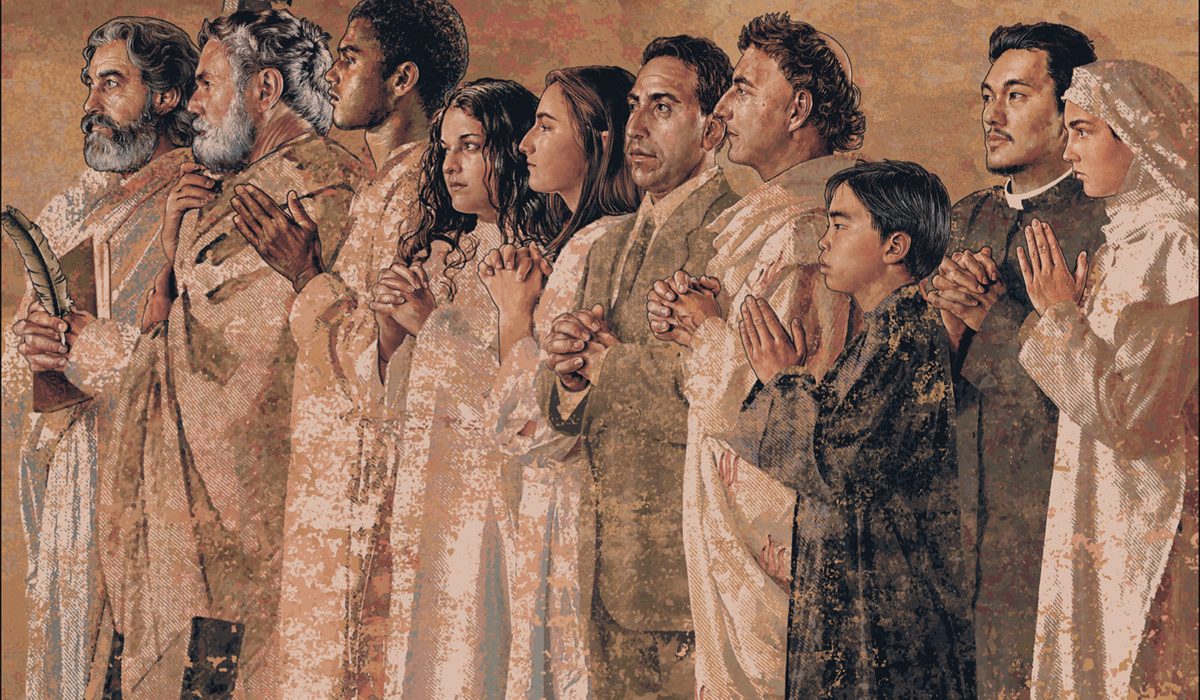 This month’s featured selection:
“My Life with the Saints” by James Martin, SJ

Today’s Catholic book club choice this month is “My Life With the Saints,” by James Martin, SJ. Loyola Press, ISBN: 978-0-8294-2644-1
This delightfully witty memoir was written by a man, currently a Jesuit priest and associate editor of America, a Catholic magazine, who claims a childhood as a “lukewarm Catholic,” but nonetheless discovers his eventual call to the priesthood. What makes this tale unique, however, is his curious relationship with 17 saints, all of whom impact his life as it unfolds.

The first chapter sets the tone simply with its title — “The Saint of the Sock Drawer.” This introduction gives the reader an overview of the importance of the saints in Martin’s life. He considered them companions … “friends to turn to when I needed a helping hand” and was able to recognize himself in their stories. He writes in the book’s final pages, “Without a doubt, that’s the most important aspect of the saints for me: they teach me about being who I am.”

His initial encounter with a plastic statue of St. Jude, patron saint of hopeless causes, ordered from a magazine when he was a boy, sets the stage for his faith journey with the saints. However, though he was very fond of the statue and prayed to St. Jude frequently, it was relegated to his sock drawer whenever friends arrived for a visit.

As he grew into adulthood and his faith grew thin, after attending Wharton Business College and working as one of GE’s top executives for five years, Martin, at age 26, eventually found his life lacking passion. It was then that he heard his calling to the priesthood.
Though as a first-year Jesuit novitiate in Boston he was expected to work 15 hours outside the seminary in ministry to the people, Martin soon came to appreciate life as it slowed from his previously grueling corporate schedule.

As he engaged in the focus of service within the Jesuit community, saints such as St. Ignatius, Mother Therese, St. Peter and Pope John XXIII came into his line of vision in sometimes the most unlikely ways. His eagerness to investigate the lives of each of the saints brought him more than just information. More often he found through their lives of faith struggles and victories over self, encouragement, inspiration and motivation to do the work God had intended for him.

Martin’s well-written and humorous account of the trajectory of his life in the seminary holds the reader’s interest and inspires an eagerness to know the next saint the author will encounter. As Martin’s spiritual formation unfolds, the reader is engulfed in the horror of the real world in which this novitiate ministers. But the inspiration he gleans from the saints, of old and everyday, during his ministry assignments is every bit as real.
Martin offers quotes and profiles of each of the saints he became so familiar with, that whet the appetite for one’s own investigation. He provides several pages of information and reference books on the saints at the end of the book for further reading as well.

This 414 page book is filled with the intriguing story of Father Martin’s childhood, educational, corporate and seminary experiences and how they relate to any given saint. It provides a roadmap of one man’s journey toward embracing his vocation and leaves the reader with the sense that the questions, doubts and fears are part of the package. His story may inspire the saint in each of us. As Father Martin says, “God does not want us to be Mother Teresa or Dorothy Day. God wants us to be most fully ourselves.”

The book closes with a short biography of Father Martin and the final three pages offer 21 questions for discussion in the “Guide for Reading Groups,” section.

Reflection questions can be found on pages 412-414.