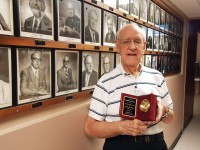 Bob Mackin holds the gift that he received in recognition of 65 continuous years of bowling in the Knights of Columbus Bowling League on April 25. Mackin is shown standing in front of his picture that is included with the pictures of previous Santa Maria Council 553 Grand Knights.

Although the league has had numerous homes, it was formed and bowled at the Indiana Club, which was the original home of Santa Maria Council 553. There were four bowling lanes in the basement, so the council started with four teams.

Mackin, the sole survivor of those who originated the league, has bowled in the KofC Bowling League for 65 continuous years and is the only originator of the league still living. He served the league faithfully all of these years. At 86, Mackin is the oldest person to bowl in the KofC League.

Mackin retired from the bowling league at the end of the 2011 season. His final KofC league bowling night was April 27. Over his bowling span, Mackin’s highest game was a 268. His highest series was a 703.

Mackin counts among his achievements serving as the league’s secretary treasurer for 50 years. But his dedication to bowling did not end there. Mackin served as president of the Knights of Columbus International Bowling Association for several years. In addition, he served on its board of directors for nine years. He is also a past Grand Knight of the Santa Maria Council.

On April 13, the Knights’ bowling league honored Mackin before league bowling began. He was presented a clock/plaque, and card signed by each bowler in the league.