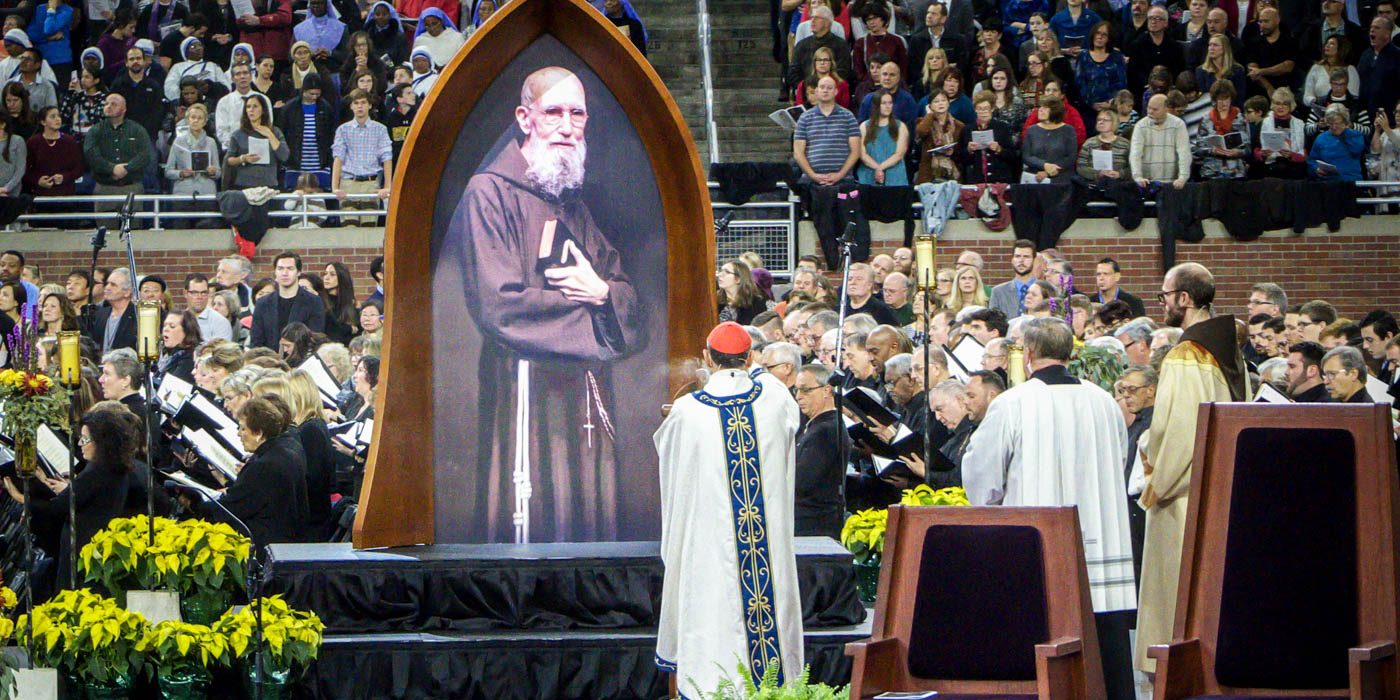 DETROIT (CNS) — A humble priest and porter, Blessed Solanus Casey thanked God daily for the gift of those who came to his door in his small corner of the world. 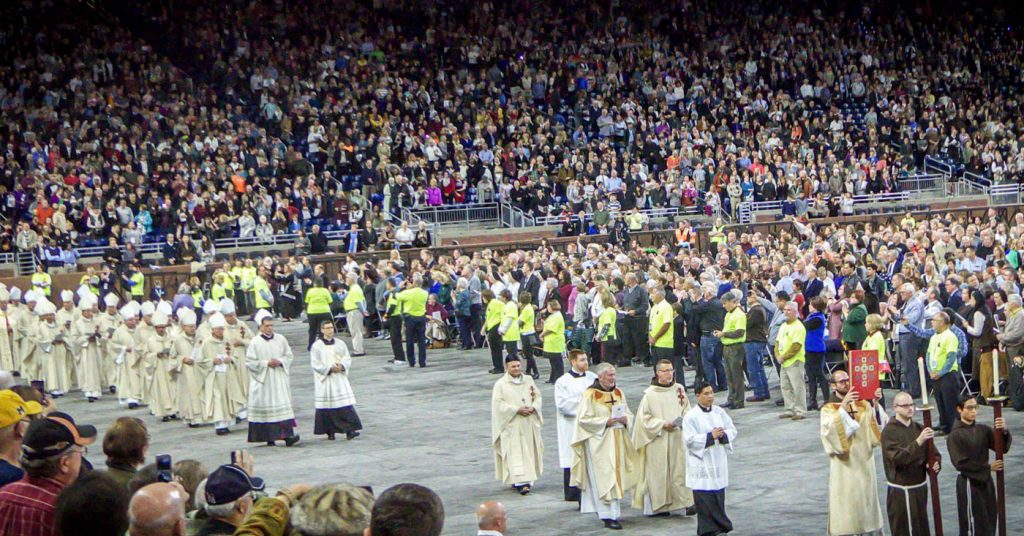 On Nov. 18, tens of thousands of those whom he touched gathered to thank God in return for the gift of the holy Capuchin’s life.

“Others, above all the poor, were seen by him not as a weight or obstacle to his climb to perfection, but as a way to the light of the splendor of God,” Cardinal Angelo Amato, prefect of the Congregation for Saints’ Causes, told the tens of thousands of people gathered at Detroit’s Ford Field for Blessed Solanus’ beatification Mass. 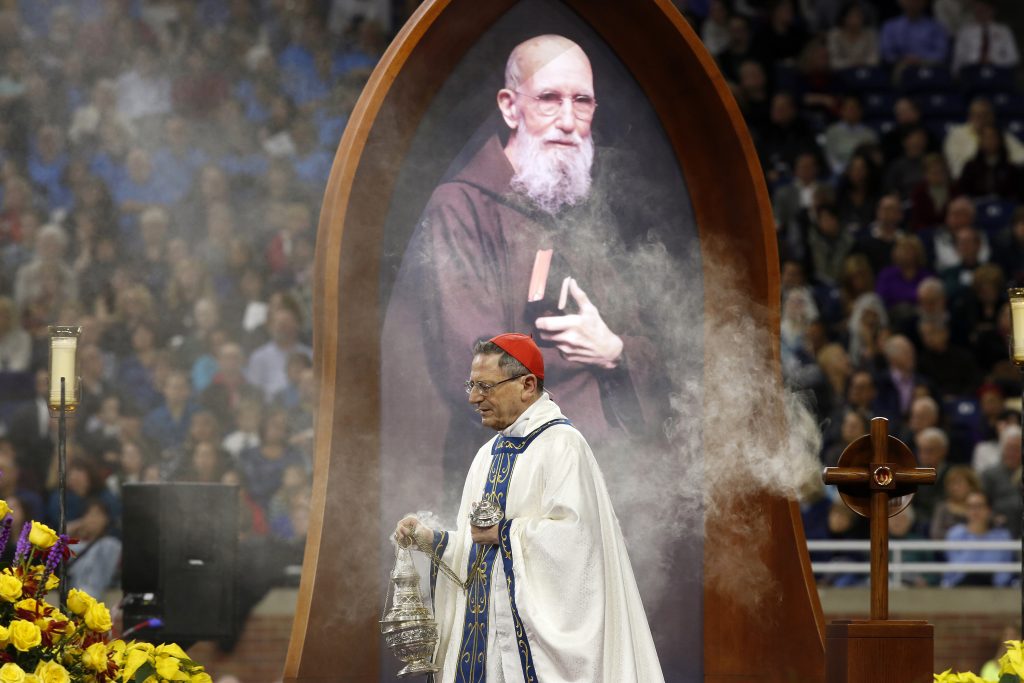 A congregation of more than 60,000 — young, old, clergy and laity, those of all races and ethnicities — flooded into Ford Field for the Mass, with tens of thousands more watching live on TV or the internet.

Countless others visited the Solanus Casey Center and St. Bonaventure Monastery over the weekend to pray and leave prayer intentions at the tomb of a saintly friar known for miraculous healings, intercessions and a compassionate listening ear.

True to Blessed Solanus’ spirituality, a special VIP section of the main floor was set aside for those with illness and disabilities. 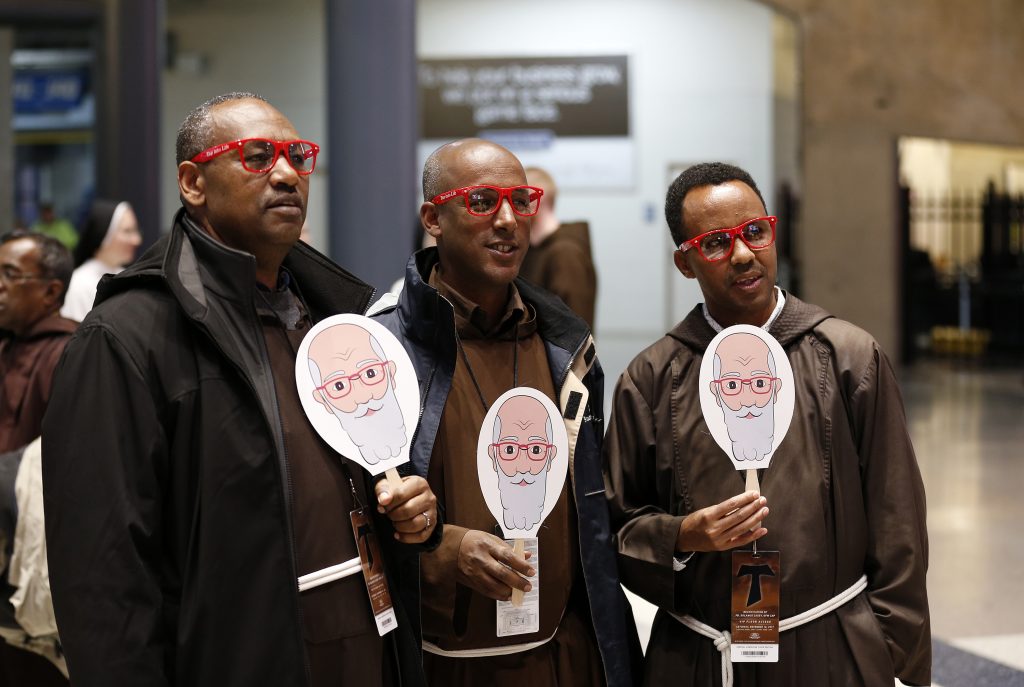 Father Michael Sullivan, provincial minister of the Detroit-based Capuchin Franciscan Province of St. Joseph, welcomed those in attendance, “especially those whom Father Solanus so loved — the sick and the poor.”

“We gather in gratitude for all of God’s blessings and for all the ways in which God moves in our lives,” Father Sullivan said. “What a witness was our beloved brother Solanus! He opened his heart to each person he met, he prayed with them, appreciated and loved them, and through him God moved powerfully again and again. Thanks be to God!”

About 35 bishops, 400 priests and deacons and more than 200 Capuchins joined together in praise with 300 members of the Casey family, members of the Father Solanus Guild and thousands of faithful during the Mass. 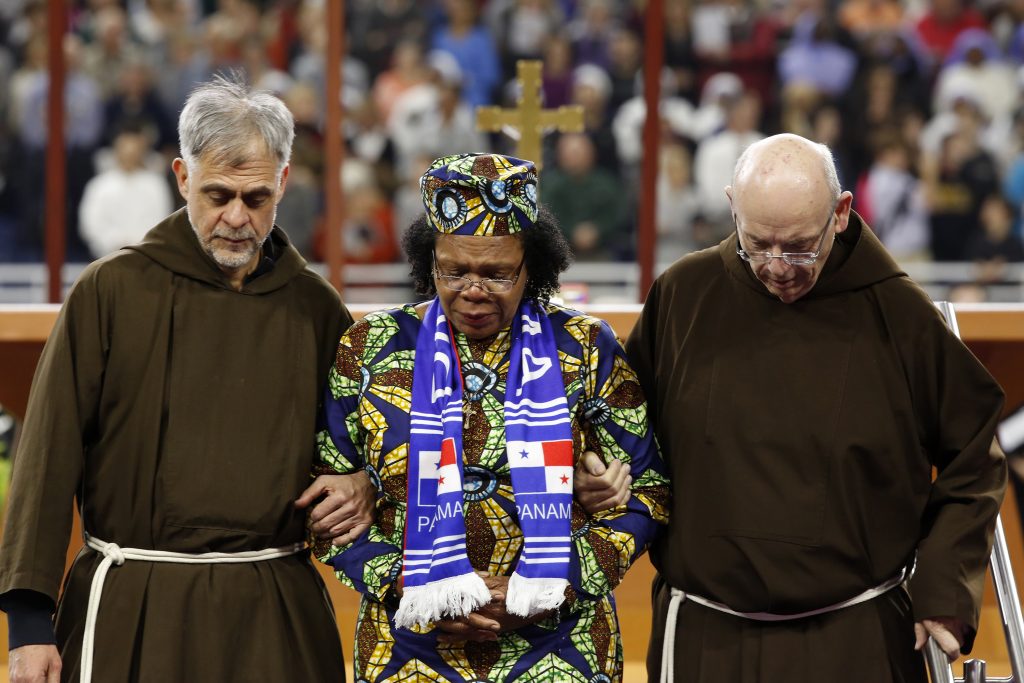 Paula Medina Zarate is escorted by two Franciscans as she attends the beatification Mass of Blessed Solanus Casey Nov. 18 at Ford Field in Detroit. The Panamanian woman’s miraculous healing from a skin disease was the miracle needed to advance the Capuchin Franciscan friar’s cause to beatification. (CNS photo/Jeff Kowalsky, courtesy Michigan Catholic)

The altar, placed at midfield, was created originally for St. John Paul II’s visit to the Pontiac Silverdome in 1987. To the right of the altar was a large painting of Blessed Solanus. It was unveiled to thunderous applause after the beatification rite, which took place at the beginning of the Mass.

The music was provided by a 25-member orchestra and a choir of 300 directed by Capuchin Franciscan Father Ed Foley. The singers were members of parish choirs from across the Detroit metro area. The Casey family’s Irish roots were reflected in the Irish hymns chosen as part of the music for the liturgy.

Reflecting the diversity of the Catholic Church in which Blessed Solanus served, readings and prayers of the faithful were proclaimed in several languages, including English, Spanish, Vietnamese, Chaldean, Polish and Tagalog.

“His favorite sons were the poor, the sick, the emarginated and the homeless,” Cardinal Amato said of Blessed Solanus, the Wisconsin-born priest with Irish roots and a whispery voice who served as a monastery doorkeeper in New York, Detroit and Huntington, Indiana, over his 60 years as a Capuchin friar.

“He always fasted in order to give them their own lunch. He spent hours upon hours patiently receiving, listening to, and counseling the ever-growing number of people who came to him,” he added.

Once, the cardinal recounted, when the Capuchin Soup Kitchen — which Blessed Solanus helped start during the Great Depression — ran out of food, the friar simply prayed an Our Father, and a truckload of bread showed up.

“When the people saw this they began to cry with emotion. Father Solanus simply stated: ‘See, God provides. No one will suffer want if we put our trust in Divine Providence,” Cardinal Amato said.

“Witnesses affirmed that love, faith and trust were the three points that he always preached to people,” Cardinal Amato continued. “Faith, hope and charity were for him the seal of the Trinity in our souls.”

Born Nov. 25, 1870, to a family of 16 children, Blessed Solanus spent his early years as a lumberjack, street car operator and prison guard before entering the seminary. After witnessing a violent attack in Superior, Wisconsin, he resolved to devote his life to God.

Despite language barriers slowing his studies toward the priesthood, he was eventually ordained a “simplex priest,” and spent the next 60 years greeting people at the monastery doors in New York, Indiana and Detroit, where he became a warm and familiar face to thousands seeking his counsel and prayers.

Cardinal Amato garnered laughs when he acknowledged that Blessed Solanus had “one little defect in his life: In the judgment of his fellow friars, Father Solanus was a bad musician.”

“For this reason, after his first failure in the community, with simplicity and humility, in order not to disturb his neighbor, on Sunday evening he went to the chapel with his violin and played Irish religious songs in front of the tabernacle. The Lord listened to him patiently because our blessed was lacking in music, but not in virtue,” Cardinal Amato said with a smile.

By virtue of his beatification, Blessed Solanus can now be publicly venerated in Detroit and in Capuchin houses worldwide. Beatification is the last step before sainthood, which would allow Blessed Solanus to be venerated by the worldwide church. His feast will be celebrated July 30, the vigil of the anniversary of the friar’s death in 1957.

Among the hundreds, if not thousands, of healings attributed to Blessed Solanus during and after his lifetime, Pope Francis recognized the authenticity of a miracle necessary for the friar to be elevated from venerable to blessed after a review by the Vatican’s Congregation for Saints’ Causes was completed earlier this year.

The miracle involved the healing — unexplained by medicine or science — of a woman with an incurable genetic skin disease, Paula Medina Zarate of Panama. She was only recently identified publicly and she was at the Mass. As it began, she walked up to the altar with a reliquary holding a relic of Blessed Solanus — a small piece of bone taken from the friar’s arm.

Zarate was visiting friends in Detroit and stopped at Father Casey’s tomb to pray for others’ intentions. After her prayers, she felt the strong urging to ask for the friar’s intercession for herself, too, and received an instant and visible healing.

The miraculous nature of her cure in 2012 was verified by doctors in her home country, in Detroit and in Rome, all of whom confirmed there was no scientific explanation. Father Casey himself died of a skin disease July 31, 1957.

During the presentation of the gifts, baskets of food were brought to the altar along with bread and wine, symbolizing Blessed Solanus’ ministry to the hungry through the Capuchin Soup Kitchen and the Capuchins’ continuing ministry today.

After Communion, the congregation was invited to sing “God, Be Praised for Humble Service,” a hymn commissioned in honor of Blessed Solanus written by Benedictine Sister Delores Dufner.

In thanking Cardinal Amato and the Congregation for the Causes of Saints “for your devoted attention to the cause of Father Solanus’ beatification,” Archbishop Vigneron garnered loud cheers when he assured the cardinal that “the field hospital of mercy is open here in Detroit.”

“Your Eminence, when next you speak with our beloved Holy Father, Pope Francis, please let him know that we are grateful beyond measure that he has judged our beloved Father. Solanus worthy of the rank of blessed,” Archbishop Vigneron said. “Assure His Holiness of our filial affection and loyalty and tell him that we are committed anew to imitate Blessed Solanus by witnessing to the good news of Christ’s mercy.”

Mike Stechschulte is managing editor of The Michigan Catholic, newspaper of the Archdiocese of Detroit.