Blessed Michael J. McGivney was “an outstanding witness of Christian solidarity and fraternal assistance” because of his “zeal” for proclaiming the Gospel and his “generous concern for his brothers and sisters,” Pope Francis said in his apostolic letter of beatification of the founder of the Knights of Columbus.

Representing the pope, Cardinal Joseph W. Tobin of Newark, New Jersey, read the letter in Latin during the Oct. 31 Mass of beatification for Father McGivney at the Cathedral of St. Joseph in Hartford, Connecticut. Beatification is a step toward sainthood.

In his homily, Cardinal Tobin elaborated on Blessed McGivney’s attributes as a parish priest.

“Father McGivney’s life is an illustration of how a holy priest can provide that necessary and intimate connection so crucial in the life and mission of a parish,” the cardinal said. 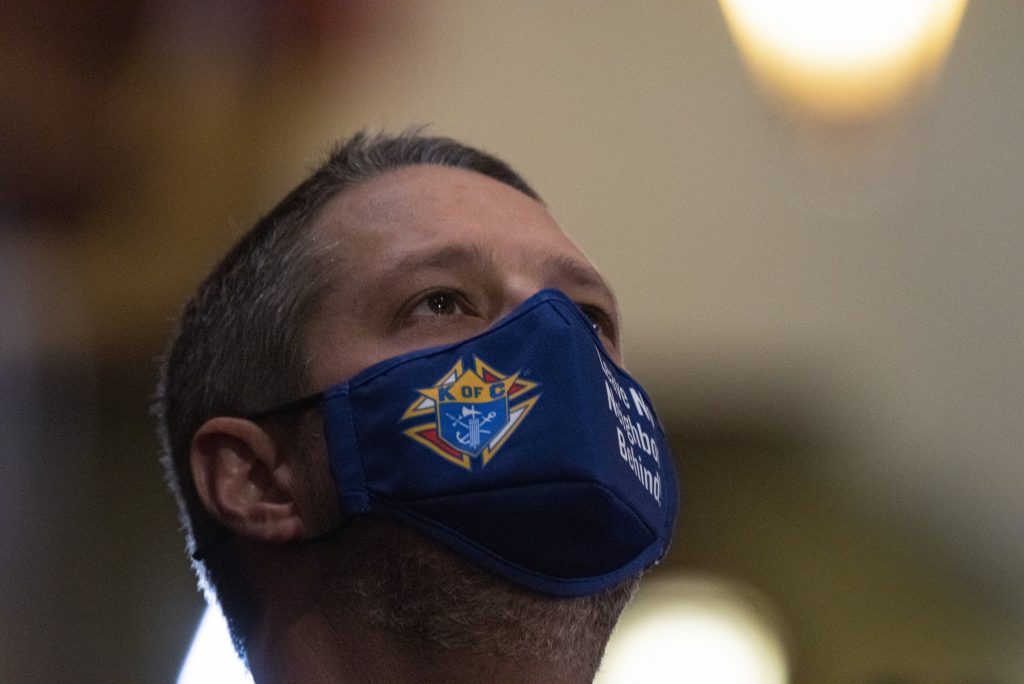 A man wearing a protective mask attends a prayer vigil at St. Mary’s Church in New Haven, Conn., Oct. 30, 2020, the eve of the beatification of Blessed Michael McGivney, founder of the Knights of Columbus. (CNS photo/courtesy Knights of Columbus)

Blessed McGivney “knew the simple, indispensable requirement for a pastor: to love his people. He was with them in their sorrows, in times of death and bereavement. He was sanctified by doing what parish priests still do, day in and day out.”

His parish was not bound by names on his church’s registration rolls, Cardinal Tobin said. “He was not a stranger to jails and hospitals. He fostered respectful relationships with other Christian churches and civil authorities. He was a bridge-builder who shunned walls.”

In Blessed McGivney, “we see the face of a son of immigrants who gave his life in pastoral service of those most recently arrived in this country,” he said. “We meet the eldest of 13 children, who worked to keep families united in dignity and security; we are in the presence of an apostle who cared for victims of an epidemic before he himself died of the disease.

“We praise God for (the) timeliness of this celebration because 130 years after his death, the brief life of this holy man speaks eloquently to our own path to holiness.” 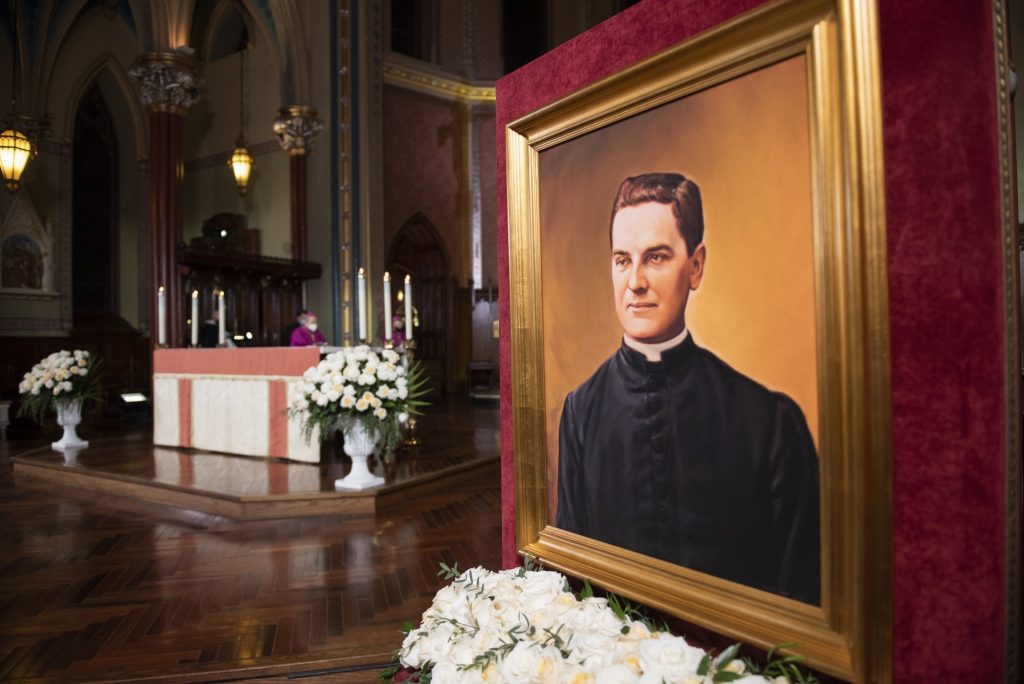 A portrait of of Blessed Michael McGivney, founder of the Knights of Columbus, is displayed during a prayer vigil at St. Mary’s Church in New Haven, Conn., Oct. 30, 2020, the eve of his beatification. (CNS photo/courtesy Knights of Columbus)

Jesus asks “each one of us to become a saint,” and “each one of us can certainly find encouragement in the life of Father McGivney, but none more than those of us who are called to become saints as parish priests,” Cardinal Tobin said.

The founding of the Knights of Columbus “grew out of his ministry as a parish priest,” he noted. And “long before his exhausted body surrendered to disease, he died daily to his own desires,” the cardinal added, and “he laid down his life for his friends.”

God is good for giving the Church Blessed McGivney “at this moment of our common pilgrimage,” Cardinal Tobin said. “In a time of suffering and division, we glimpse his face among the ‘cloud of witnesses’ that urge us on. In Blessed Michael, we are reminded that life is not transactional, but a gift to be shared.

“We appreciate that true worship is centered on a right relationship with God and others, particularly those on the margin of society, and that Christian unity is more than simply adherence to a common belief,” the cardinal said. “We accept that like him, God calls each of us — in our own day and our own way — to be vessels of mercy and so enter into our heavenly inheritance.”

The beatification rite came shortly after the beginning of the Mass. After Cardinal Tobin read the rite in Latin, Archbishop William E. Lori of Baltimore, the Knights’ supreme chaplain, read the English translation of the letter. A giant tapestry of Blessed McGivney’s portrait was unveiled in the cathedral sanctuary.

Michael “Mikey” McGivney Schachle, together with his parents, Daniel and Michelle, and several of his 12 brothers and sisters, carried a relic of Blessed McGivney and presented it to Cardinal Tobin. The relic was placed in the sanctuary and censed.

Mikey, now 5, is the child whose in utero healing from a life-threatening condition that, under most circumstances, could have led to an abortion, was confirmed by Pope Francis; it was announced in May as a miracle that occurred through Father McGivney’s intercession.

This miracle paved the way for the priest’s beatification. In general, a second miracle is needed for canonization. 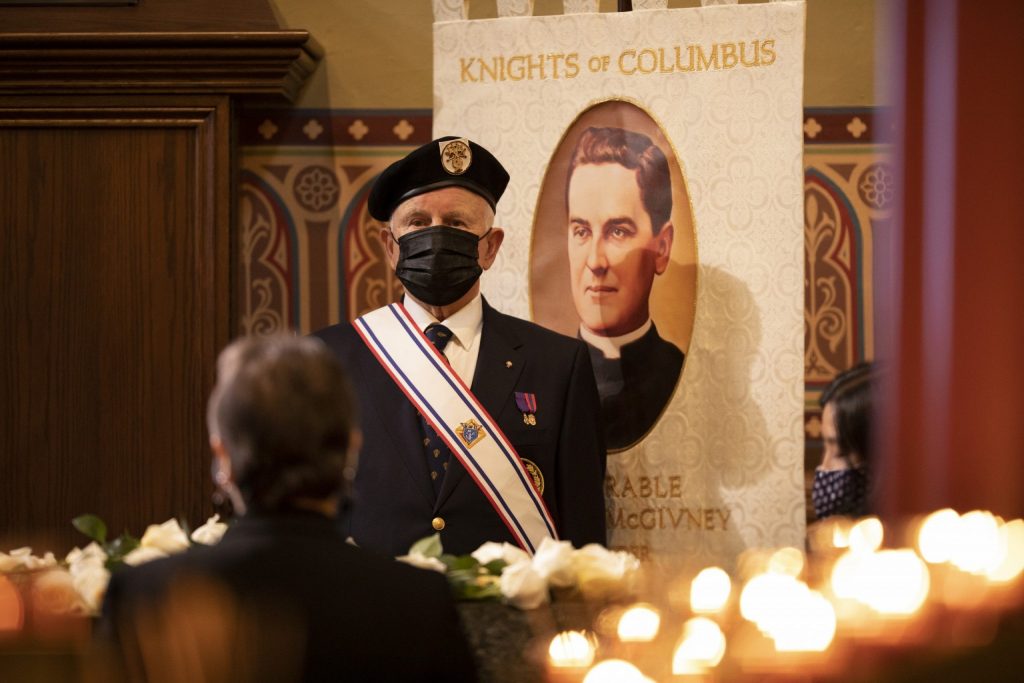 Before asking Cardinal Tobin that the beatification proceed, Hartford Archbishop Leonard P. Blair welcomed those in attendance — and all watching from afar — to “the joyful celebration of the beatification.”

The number inside was limited by COVID-19 restrictions, and those in the cathedral wore face masks and practiced social distancing.

Thousands more, in the U.S. and around the world, participated by watching the EWTN broadcast of the Mass or a livestream of it on www.kofc.org.

Supreme Knight Carl A. Anderson read a brief biography of the Knights founder, saying that by establishing fraternal order he “presented to the Church a paradigm” for an active and engaged laity.

The priest embodied the order’s core principles of charity, unity and fraternity, he said. His holiness directed him toward parish life, “not away from it,” and did not separate him from others but “drew him to their lives,” because he knew his people’s hardships firsthand, Anderson added.

Blessed McGivney (1852-1890), the son of Irish immigrants, was born in Waterbury, Connecticut, and was ordained a priest in 1877 for what is now the Archdiocese of Hartford. As a parish priest, he worked to improve the condition of his 19th-century Irish immigrant community in Connecticut.

In 1882, while he was pastor at St. Mary’s Parish in New Haven, Connecticut, he founded the Knights of Columbus to provide financial support for widows and orphans and to keep Catholic men and their families close to their faith at a time of widespread anti-Catholic bigotry.

He died of pneumonia complications at age 38 in 1890, during an outbreak of influenza known as the Russian flu in Thomaston, Connecticut. Some recent evidence, according to the Knights, indicates the outbreak may have been the result of a coronavirus.

The apostolic letter of beatification also announced Aug. 13 as the feast day for Blessed McGivney — the day between Aug. 12, the day he was born, and the date of his death, Aug. 14.

It will be observed annually in the Hartford Archdiocese. Votive Masses in honor of Blessed McGivney also can be celebrated by priests for Knights of Columbus gatherings “with the permission of the local bishop on any day when not superseded by another observance on the liturgical calendar,” the letter said.