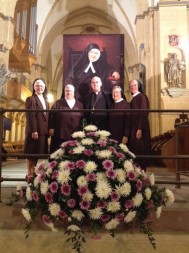 It was a great joy and blessing for me to join 47 of our Sisters of Saint Francis of Perpetual Adoration in Paderborn, Germany on Sunday, November 10th, for the beatification of their holy foundress, Mother Maria Theresia Bonzel. Three priests of our diocese were also present for the beatification: Fathers Daniel Scheidt, Jason Freiburger, and Ben Muhlenkamp.

I concelebrated the beautiful beatification Mass in the 700-year old Paderborn Cathedral with Cardinal Angelo Amato, the Prefect of the Vatican Congregation for the Causes of Saints, and the Archbishop and Auxiliary Bishops of Paderborn. At the beginning of Mass, after Mother Maria Theresia was proclaimed “Blessed,” a beautiful painting of her was unveiled in the sanctuary. It was an emotional moment for the sisters and all present.

On the next day, November 11th, the festivities continued in the city of Olpe, Mother Maria Theresia’s hometown and the site of the congregation’s motherhouse. November 11th is a special day in Germany — the feast of Saint Martin of Tours. Saint Martin is the patron saint of the parish in Olpe. The city’s coat of arms shows Saint Martin giving half of his cloak to a beggar.

After Vespers in the motherhouse chapel, we processed in cars and buses to Saint Martin’s Church. Blessed Maria Theresia’s body was transported from the motherhouse to Saint Martin’s Church where a Blessed Sacrament chapel was constructed, with a tomb inside, as the permanent resting place for Blessed Maria Theresia. Hundreds of people, along with a local band, gathered outside singing and praying as the coffin was carried into the church. It was an emotional moment especially for the German sisters, as their beloved foundress, whose body had been interred for so many years at the motherhouse, was now to be kept at the parish church for the veneration of all. 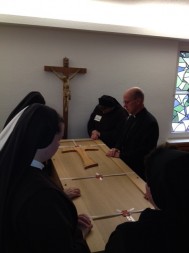 Bishop Kevin C. Rhoades and Sisters of St. Francis pray over the casket of Blessed Maria Theresia Bonzel at the motherhouse in Olpe, Germany, before the casket was taken to the parish church.

After the casket was lowered into the new tomb, we continued with Mass at Saint Martin’s Church, celebrated by Cardinal Paul Cordes. The church overflowed with people. I was struck by the robust singing of German Catholics. The liturgy was beautiful.

Blessed Maria Theresia’s childhood home was right next to Saint Martin’s Church. She was born and raised in Olpe and it was there that she began her care of orphans and founded the Sisters of Saint Francis in 1863.

In conversation with the German bishops and sisters, I learned of the challenges of the Catholic Church in Germany, not unlike the challenges we face here in the United States, though perhaps more acute. Secularism and a decline in religious practice are evident. The Sisters of Saint Francis in Olpe are not attracting new vocations, unlike our Sisters in Mishawaka. The German people were surprised and grateful to see many young American sisters.

The German bishops also shared with me some signs of hope as a growing number of young Germans are getting involved in the Church. Though this is a minority, their commitment to the faith is strong. The new evangelization is not just about numbers: it requires deep commitment to Christ and witness to Him in the midst of a secularized culture. It is like Our Lord’s parable of the mustard seed, a tiny seed, that grows into a large bush. It is good to keep this in mind. The new evangelization involves authentic conversion to discipleship, the rediscovery of faith and its power and beauty.

Holy men and women, witnesses of faith like Blessed Maria Theresia Bonzel, teach us the beauty of following the Lord Jesus in our lives. They teach us to bear witness to the fact that we are Christian: in the family, in the workplace, and in public life. We are to live by faith with constancy and not grow lazy in our practice.

At the beginning of this Year of Faith, Pope Emeritus Benedict XVI wrote: “What the world is in particular need of today is the credible witness of people enlightened in mind and heart by the word of the Lord, and capable of opening the hearts and minds of many to the desire for God and for true life, life without end.”

May Blessed Maria Theresia Bonzel intercede for us and our diocese in the work of the new evangelization!