When Christine Baglow, youth minister at St. Joseph Parish, South Bend, heard the special Vatican Eucharistic Miracle Exhibit was going to be traveling again, she knew the perfect time for which to reschedule it for a visit to her parish.

Like so many other spring events, the COVID-19 pandemic canceled the original date of the visit, planned for May. But Baglow learned that Oct. 10 was the beatification of then-Venerable Carlo Acutis, the creator of the exhibit and a 15-year-old Italian teenager who died on Oct. 12, 2006.

Considered a genius of computer programming, Acutis strived to live a holy life from a young age. He enjoyed soccer, Pokémon, action films and his many pets. Well-liked by teachers and classmates, he had a good sense of humor.

Carlo liked playing videogames on his PlayStation but chose to limit himself to only an hour a week as a penance and spiritual discipline. He used to say, “What’s the use of winning 1,000 battles if you can’t beat your own passions?” He didn’t want to waste his time, desiring to do “only God’s program for my life.”

Acutis used his first savings to buy a homeless man he saw on his way to Mass a sleeping bag. At his funeral, hundreds of people came, many poor and homeless who his parents had never met before. Acutis had befriended them on his walk to the best prep school in Milan.

As he was dying of leukemia, he said, “I am happy to die, because I lived my life without wasting even a minute of it on anything unpleasing to God.”

After his first Communion, he went to daily Mass, even though his parents at the time were not practicing Catholics. At age 11, he researched and organized a catalog of eucharistic miracles. By age 14, he had created a eucharistic miracle display that would tour the world, and an accompanying website.

The exhibit has 160 panels and has been to over 10,000 parishes. Acutis believed that if people knew that Jesus was truly present in the Eucharist, they would turn to God. He could not understand why sport stadiums were full of people and churches were empty. 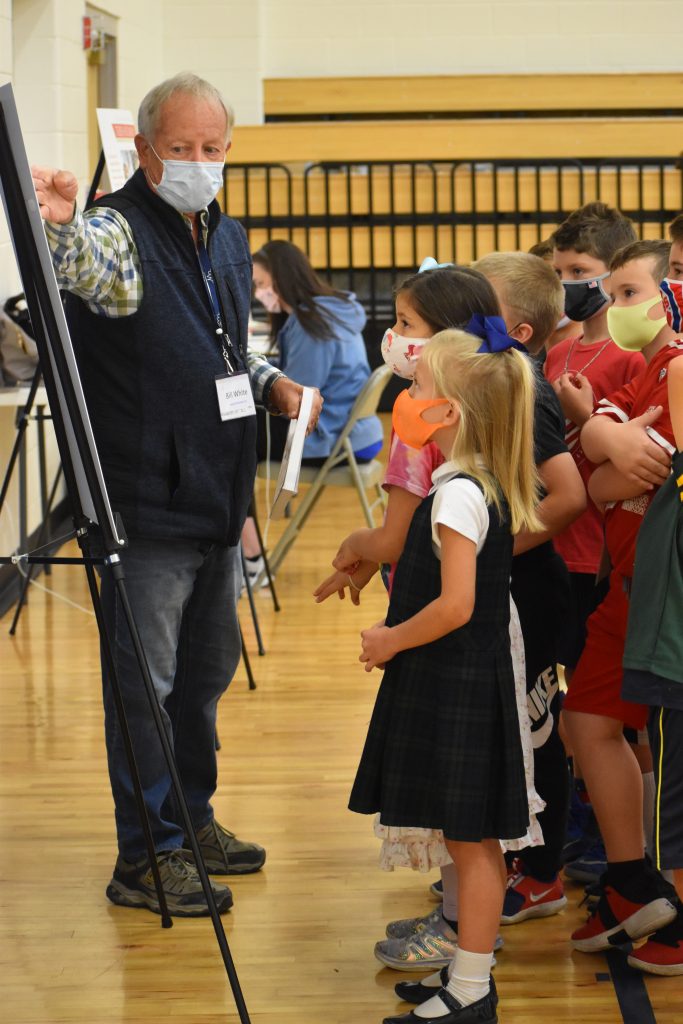 “We all agreed that hosting the Eucharistic Miracles Exhibit would present a beautiful opportunity for our parish community to engage in a deeper way with the real presence of our Lord in the Blessed Sacrament,” said Sean Driscoll, director of religious educations at St. Joseph. “I’m especially excited that our children — particularly those preparing to celebrate sacraments this year — had the opportunity to witness and experience the full beauty of the Eucharist in a very unique way.

“It is also very exciting to be able to present this exhibit to our children alongside the witness of Blessed Carlo Acutis, a young man barely older than themselves, in whom they can see a very relatable model of holiness and devotion to Christ and our Blessed Mother.”

For two days, the special exhibit was presented to students at Saint Joseph High School, then traveled down a hill to the St. Joseph Grade School gymnasium, where the whole school attended. The parish opened it to the public for a weekend too, and a prayer service took place Oct. 10 at the same time Blessed Carlo Acutis’ beatification occurred with Pope Francis in Assisi, Italy.

“Perhaps, the most challenging part of catechizing second graders before their first Communion is getting them to fully understand transubstantiation,” said Hannah Man speaker, second grade teacher. “It is a difficult thing to grasp … during our first Communion preparation I have no doubt that we will refer back to the exhibit to strengthen students’ understanding of just how real the true presence is.” 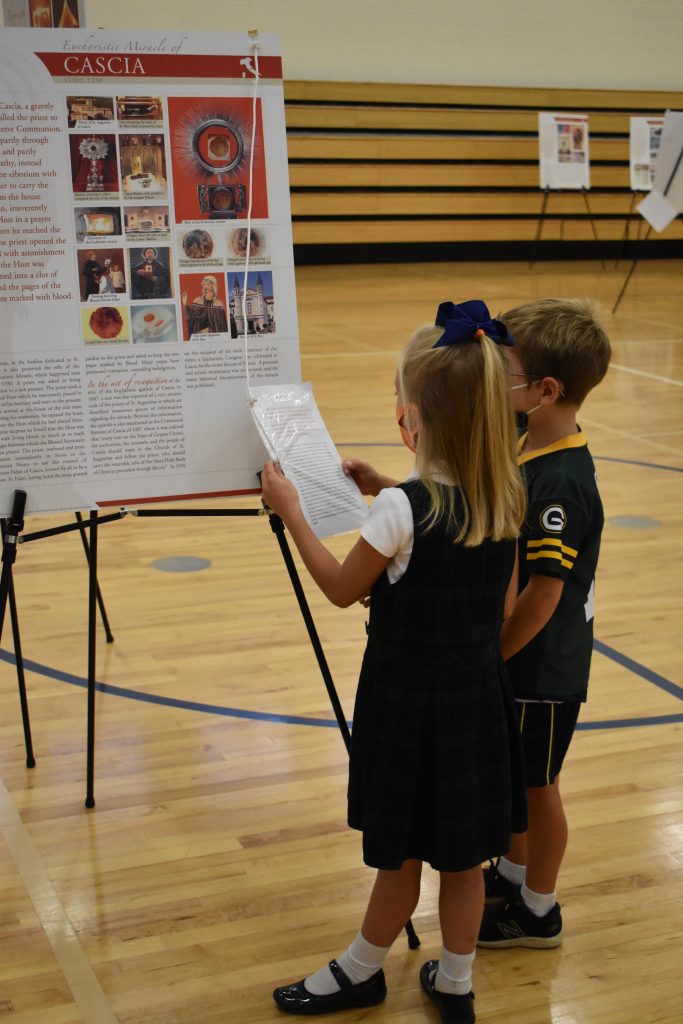 Second grader Cristina Echeverry Polania described her favorite eucharistic miracle from the exhibit, the one from Alboraya-Almacera, Spain.

“My favorite part was learning that when people weren’t believing that the Eucharist was really Jesus’ blood and flesh, that the wine in the chalice turned to blood and started boiling and the bread turned into flesh,” Jake Vida recalled.

When asked about Blessed Carlo Acutis, second grader Peter Connolly mused, “I would like to be friends with him. The coolest part about him is that he collected all those eucharistic miracles. He must have cared a lot about the Eucharist.”

The new date of the exhibit’s visit was also ideal for the eighth grade students. They were about to receive the sacrament of confirmation from Bishop Kevin C. Rhoades, after a year and a half of preparation.

“The timing could not have been any more perfect. Carlo Acutis was just a year or two older than they are now when he died, and I think that is so beautiful,” their religion teacher, Audrey Lewis, shared. “It makes sainthood and holiness accessible to them, right here, right now. We began our year talking about the universal call to holiness — that we are all called to be saints and that we all can be saints: It is profound to be able to look at the life and witness of Carlo as so deeply holy, and yet so attainable.” 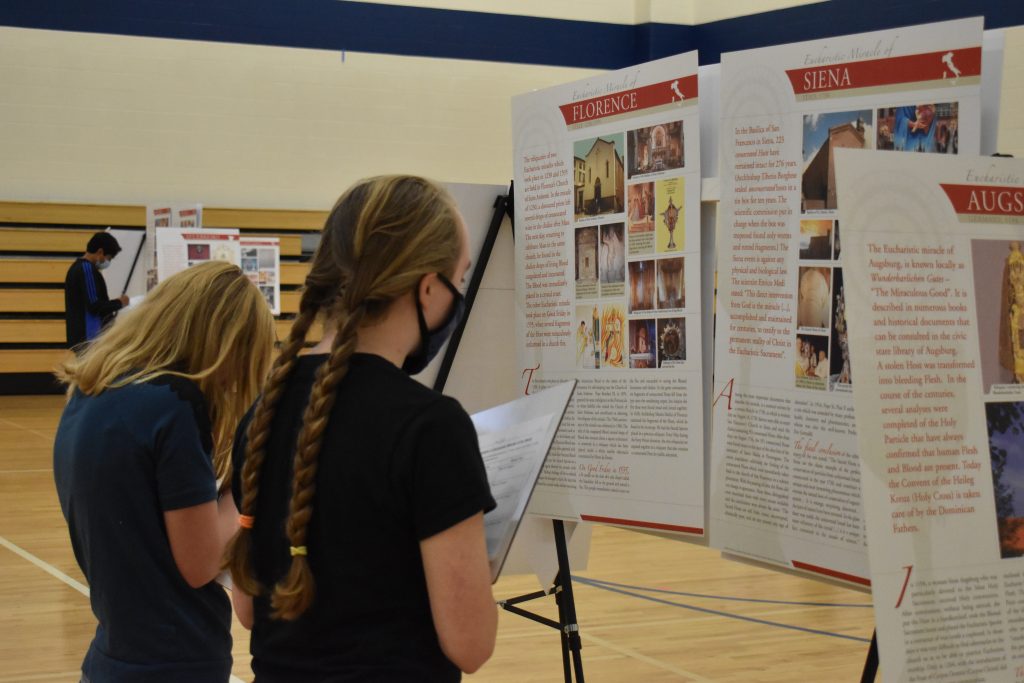 The eighth graders, some nervous, some excited, contemplated the miracles of the Eucharist displayed. Maura Green found the exhibit enjoyable and interesting.

“Of the few I learned about, they all had scientific evidence to prove what was found, such as pieces of the human body,” said Maura. “I was able to learn what they were, and how many have occurred in history that we know of. I think what stood out to me the most was the number of miracles that have happened. Some of them were in the last decade, too. … I was amazed by these things because it showed that miracles could happen any day, and they’re not done happening.”

Classmate Lucy Noem reflected, “I think what I enjoyed most was being able to visit the whole exhibit in general — I really liked being able to view a large collection of recorded miracles in one place. It was cool to be able to see all of the amazing signs by God that happened here on earth.”

Maura reflected: “What stood out the most about Blessed Carlo Acutis was his age. I haven’t heard of more than one or two people about my age who are on their way to sainthood. Also, his death was recent, and what he did is still prominent, and has had a personal effect on me.”

“Blessed Carlo Acutis is a fantastic role model, especially for people my age,” noted John Miller. “It’s especially easy to relate to Blessed Carlo Acutis more than other saints because he enjoyed the same activities and hobbies that kids my age do, so it’s easier to apply how he lived his life to my own. It’s much harder doing that with someone who lived from hundreds of years ago.

“After seeing everything that Carlo put together, I was befuddled as to why everyone wasn’t Christian,” John said.