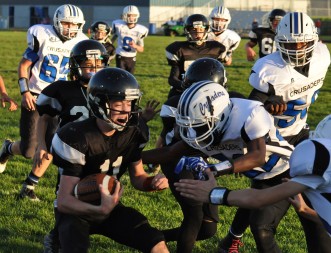 “Best game ever” was the murmur heard as fans drifted off into a dark fall night on Sunday, Oct. 23, after witnessing a battle for the ages: two of the tri-champions of the Inter-City Catholic League squaring off in the semifinal of the playoffs.

The Holy Cross Crusaders, owning a regular-season victory over their adversary, the St. Matthew Blazers, knew a win would put either team in the championship game and an equally important matchup against a CYO team from Fort Wayne in November.

The weather had a crisp but pleasant allure as the Crusaders started on their own 23-yard line, but struggled to get going as the Blazer defense dived through gaps. Holy Cross elected not to punt on a 4th and long; instead, quarterback Matt Eck tossed the pigskin to Gavin Stefanek, who burst 79 yards for a touchdown. Stunned Blazer fans then watched as Stefanek kicked the points-after try through the uprights, making the score 8-0.

The first possession for the Blazers almost mirrored that of the Crusaders. They fought off a stingy defense, had their backs to the wall, and went for it on 4th and long, before playmaker Bryce Martens broke through and scampered 55 yards for a touchdown. The kick would not be true and the margin stood at 8-6.

Defense took over the game as both teams held the other in check, with little real estate given until the Blazers took over on the Holy Cross side of the field.

The Crusaders keyed on Blazer star Isau Gonzalez, so the black swarm elected to go with Joey Barkowski and the legs of Martens, who navigated a nine-play drive that looked stalled after a holding call in the red zone. 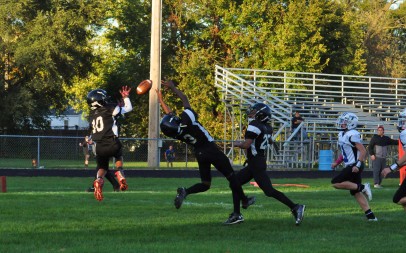 The resourceful Martens, on a 2nd and goal from the 14, found his smallest receiver, Bernard Coutee, in the end zone for the touchdown as the clock was waning. The kick was no good, making the score 12-8.

The Blazers got the ball to start the second half at their own 30, and found lightning in as bottle as Gonzales had two rushes back-to-back for 8 and 35 yards Then, like a tight-rope walker in the circus, Martens tiptoed for 32 to pay dirt, making the score 18-8.

The Crusaders counterpunched as Stefanek ran for some tough yards. The combination of quarterback Eck and Jack Futa connected on a 25-yard first down reception and followed with an 18-yard strike for a touchdown. The points-after kick by Stefanek was gold and narrowed the margin to 18-16 with 3:16 left in the quarter.

The story within the story was the offensive and defensive all-stars on each team getting nicked up. Each time that happened, the emotional momentum changed the pace of the game. One of the reversals of fortune came as Blazer Martens was helped off the field and to the bench, where he applied ice to his leg. As he did, his team struggled to the point they found themselves at a devastating 4th and 23 tucked in their own territory.

The next play was one for the highlight reel. Martens gingerly set up behind the center and evaded the heavy rush of Crusaders, scrambling for what seemed like an eternity. He found Gonzalez crossing the field and watched him bolt for the remaining 80 yards for a touchdown. The Blazers again would failed on the points-after, leaving the door open at 24-16 with 6:32 left.

The big three of the Crusaders, Asante Anglin, Futa and Stefanek, again took a shot from the Blazers and counterpunched. Each touched the ball only once in the drive that saw the latter plunge into the end zone for a touchdown.

The strong leg of Stefanek was crucial as he kicked the extra points for the third time, making the score tied at 24 with 4:57 left on the game clock.

The fans seemed to understand that with the well-executed kicking game of the Crusaders, anything short of a touchdown and stop from the Blazers would potentially mean the white-and-blue-trimmed team would have the advantage should the game go into overtime.

The Blazers had to start their march with their backs to their goalposts, starting at the 25.

Loud cheers and words of encouragement flowed from the stands as Martens, Gonzalez and company inched their way down the field, eyeing the clock and aided by another tremendous 40-yard catch by Coutee, burrowed all the way down to the 1 with 39.2 seconds left.

Joey Barkowski fell into the end zone, giving the Blazers the lead with the much-anticipated kick-after waiting in the wings. The snap was true and the hold good, but the Crusaders mustered the fortitude to break through the line and block Gonzalez’ kick, making the score 30-24.

The clock became the most formidable opponent of the Crusaders. On the last play from scrimmage, it was only fitting that the best offensive player for Holy Cross, Stefanek, would be one-on-one against the best defensive player for St. Matthew, Gonzalez. The perfect form tackle would bring the game to a close, lifting the Blazers to the victory.

“What a game. The saddest thing about it (was), someone had to lose,” remarked Crusader Coach of 23 seasons John Krzyzewski. “Martens is such a player. He makes and creates things that are hard to prepare for.”

“I just want to add that my eighth graders, Futa, Stefanek, Anglin, Eck, Dominik Verzele, William Henderson, Malcom Anderson, Aaron Greve, Ben Appleton, Matt Hirschler and Adam Guzicki worked, led and played together. That made this season a successful one for me,” exclaimed Krzyzewski.

“I’m happy for our boys,” said Blazer Coach Ben Domonkos. “Our program has taken our lumps over the last few years, and they all come to work every day and sometimes don’t get to see the benefit. What a game to be a part of.”

The Blazers of St. Matthew will play in the championship game Sunday at 3 p.m. at Marian High School, and take on the Panthers of St. Anthony, who dispatched Mishawaka Catholic 38-0.

The Panthers’ offense was highlighted by touchdowns from Brandon Prokop, Walter Wesson, Charlie Peterson and Cameron Leep, and aided by the kicking of Charlie Leonard, who booted a couple of points-after tries and a long-distance field goal.