On June 6, with chants calling for racial justice, close to 200 people marched from an intersection near St. Augustine Church to the federal courthouse.

Members of the clergy and individuals of different racial groups came out to support in the young adults in the black Catholic community who organized the grassroots initiative.

“I heard young people asking where the Catholic presence was,” said Barnes-Palmer during an interview before marching downtown. “We wanted to show that black Catholics are engaged. That we care and we’re ready to stand for the injustices black people are experiencing in America.” 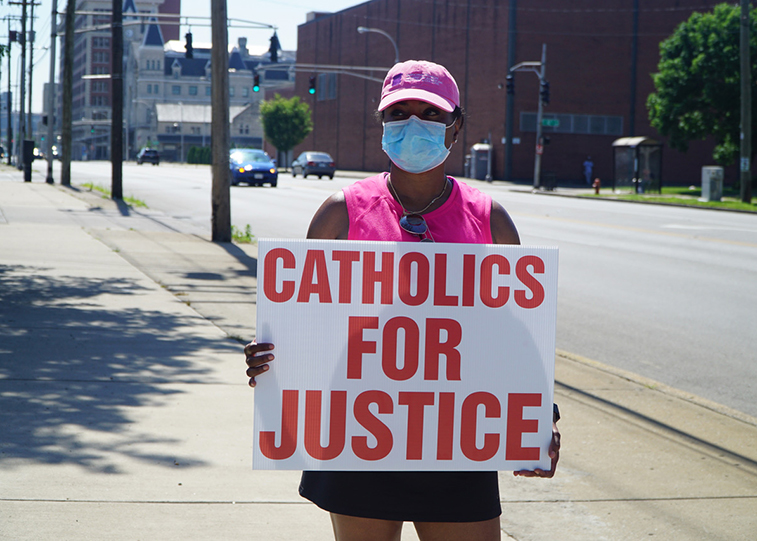 Father John Judie, a retired priest of the Archdiocese of Louisville, addressed the gathering, noting that racial justice wasn’t only the dream of the Rev. Martin Luther King Jr. It also is “God’s dream,” he said.

“Racism is a deeply rooted systemic problem and it is as dangerous and destructive as cancer in the blood. It works constantly to eat away and destroy the very spirit and soul of our human community,” said Father Judie.

“For African Americans in the United States, it can be traced back as far as 1619, when the first shipload of our African ancestors was taken from the motherland and brought into slavery in this country,” he continued. “America has a shameful history of how black folks have been treated here ever since.”

Slavery, said Father Judie, was a “violation and betrayal of the dream of God.”

That betrayal and violation continue today in the “lack of health care insurance, less access to health care, less than adequate housing, the preferential treatment given to whites over people of color in the corporate world, academic institutions and in the Church,” he said.

Father Judie said there needs to be “radical, systemic change … that digs into the very depths of every person’s soul.”

African American young adults who marched downtown said they want their voices heard and that they need the Church’s support now more than ever.

Barnes-Palmer, a member of St. Martin de Porres Church, who is the mother of a 15-year-old boy and a 12-year-old girl, said the recent violence against blacks is difficult to explain to her children.

“It was challenging explaining to my 12-year-old daughter why this is going on, but it provided an opportunity for me to explain to her how some blacks are treated in America,” she told The Record, newspaper of the Louisville archdiocese.

“I have a 15-year-old son who will be driving soon and become an adult. I’m worried he could be the next Trayvon Martin. That he could be profiled, shot and killed,” she said.

Martin was a 17-year-old who was shot and killed by neighborhood watch volunteer George Zimmerman in Sanford, Florida, in 2012. The unarmed teen was found with a pack of candy.

“It’s not fair that our people are shot and killed,” said Barnes-Palmer. “Police officers are not held accountable for murder and taking black lives.” 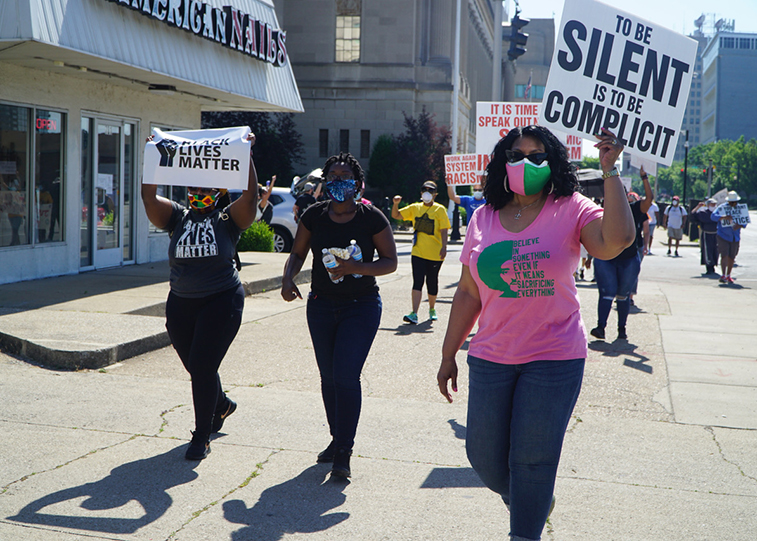 “We’re still getting targeted as African Americans by the police. It’s the same fight our ancestors were fighting not even 50 years ago. I don’t want to be the next guy or I don’t want my child to be shot by the police or a racist man in the city,” said Dillard, adding that he’s been the victim of racial profiling on many occasions.

Dillard is the father of two young girls. He also has nephews whom he worries about as well, he noted.

Marshall Washington, a member of Christ the King Church, said prayers and the support of the Church are critical at this time.

“What we really need is the support of the Church and faith in God because that’s what will get us through these trying times. We need to maintain constant prayer and hope that our cries for help are recognized by those in power,” he said.

The recent violence against African Americans is “heartbreaking, but not surprising. I expect this response from law enforcement and those in power. I’m glad it’s bringing awareness of the issues we deal with to the general populace,” he said.

On Memorial Day, in Minneapolis a police officer was captured on video kneeling for almost nine minutes on the neck of George Floyd, 46, who later was declared dead at the hospital. In Louisville, emergency medical worker Breonna Taylor, 26, was shot to death March 13 by police in her home. In February, Ahmaud Arbery, 25, was fatally shot by three white men now facing murder charges.

Kenya Turner, a member of St. Martin de Porres Church who helped to organize the June 6 march, said it’s important at this moment to highlight Catholic social teaching, which states that humans were created in the image and likeness of God and therefore have inherent dignity.

What blacks need from the Church right now, she said, is support as well as acknowledgment of “the special gifts that we bring to the whole Catholic community.”

“As black Catholics, it’s important also to come together in solidarity to say to the city, to say to the state, to say to the world that we see, we acknowledge what’s going on and let the world know we are in support of each other in our faith,” Turner, added.

Thomas is a staff writer at The Record, newspaper of the Archdiocese of Louisville.