Poetry is often a personal expression of one’s life – his or her emotions, experiences and worldview. For a South Bend man, poetry has become an expression of his faith as a Black Catholic.

Jenario Morgan has been writing poetry for roughly 10 years, but last year’s quarantine accelerated his writing and motivated him to self-publishing a poetry book.

“I’ve always loved poetry,” Morgan stated. “I started to develop my own as the years and life experiences went by.”

Originally from Detroit, Morgan and his wife, Leslie, moved to South Bend many years ago when Leslie had the opportunity to pursue a career as an academic librarian at the University of Notre Dame. Their two children, Gabrielle and Gelasius, both attend school there. He works as a paraprofessional at Riley High School. 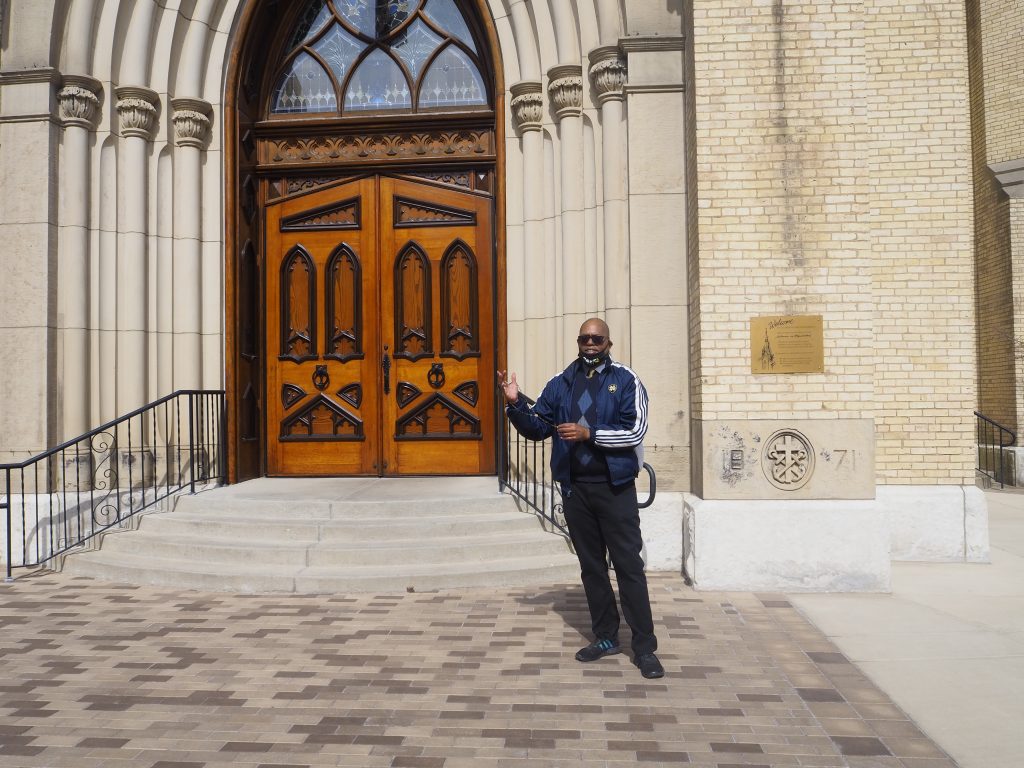 Jennifer Barton
Poetry is the medium in which Jenario Morgan expresses his Catholic faith. At the Basilica of the Sacred Heart in Notre Dame, Morgan shows off a rosary that his wife, Leslie, gave him.

For Morgan, the Catholic Church “came into my life at a critical time. My father was passing away and a lady down the street offered to take me to church with her, and I really settled in.”

That was nearly 40 years ago. Morgan was confirmed on his 21st birthday.

Morgan formerly served as a theology teacher in Detroit and as the first diversity director of the Archdiocese of Detroit. He has been a part of the Knights of Columbus for nearly 38 years and has a great appreciation for the organization’s mission of charity and family.

He might be a convert, but he feels that a part of him was born into Catholicism. “I was always meant to be Catholic, and that’s why I came into it the way I came into it.”

Many of his poems relate to his Catholic faith. “The Church is really an integral part of who I am, and a lot of my poetry has to do with the Church and the life of the Church.”

This is reflected in his poems, such as one titled “Black Catholics.” It illuminates the tremendous contributions of Blacks to the Catholic faith, including the saints Martin de Porres, Benedict the Moor and Josephine Bakhita. The poem anticipates the growth of the Black Catholic demographic within the Church community and greater recognition of the gifts they bring to it.

That is to be or not to be?

Jesus is the answer, you see

Joyous jamming living life to its highest level, knowing Jesus has the gavel

Mother Church towering from her African genesis, treasures flowing like gold down the Nile

Black saints waiting to be canonized

While on trial, centuries to belong

Prayers of the faithful

Ringing their rosaries on bended knee

At God’s speed, we will win the race to be free!

But saints are not the only Black Catholics Morgan wants to highlight in his work. He has one poem dedicated to Kobe Bryant, whose Catholic faith was often overlooked until his passing in 2020.

Morgan refers to many other Blacks “who hold dear to their faith,” but whose Catholicism is also unknown to society, such as Simone Biles, the most decorated gymnast in the U.S.

Two of Morgan’s poems have been published in Black Catholic Messenger, and he hopes publication of his book will open discussions throughout the diocese and beyond about the immense role that Black Catholics have played in the life of the Church throughout the centuries.

In his own lifetime, he has been blessed to meet Sister Thea Bowman, FSPA, whose cause for canonization is now open and who was elevated to Servant of God in 2018.

“What an honor that was. She was so outspoken and very much an advocate,” he said.

Twice Morgan met future-Cardinal Wilton Gregory, once telling him he could be the first Black cardinal from the U.S. Morgan was thrilled by Archbishop Gregory’s elevation to cardinal, even writing a poem commemorating the significance of the occasion.

Though there is much more work to be done toward inclusiveness and social justice in the life of the Church, Morgan commends Bishop Kevin C. Rhoades on the steps that the Diocese of Fort Wayne-South Bend has made toward being inclusive of all people within the Catholic community.

He believes the Black Catholic community at Notre Dame still has strides to make. He said, “You’d think there’d be more of a foothold into inclusiveness, although since I’ve been here it has grown immensely. I think they’re doing a good job, but then, again Black Catholics have to participate more.”

A sense of ownership and belonging would go a long way toward bringing more Black Catholics to the forefront of Church life, Morgan postulated. He would like to see more schools teach young people about Black Catholicism, “because our contribution is so large and yet hidden under a barrel.”

For his own part, Morgan lives his faith daily. “I’m a very spiritual person. I see God as the commandment, as the Person; so He’s always here,” Morgan shared. “Even though I wasn’t a cradle Catholic, I feel more at home with the Church than anywhere. I love the Church and its pronouncement. It’s efficacious.”

His upcoming book will be titled “Black Nouns.” He is hoping to complete the work by June, in time for his birthday.

His family has been an incredible source of support for his work, he said. His parents, William and Feblene, have been encouraging and he describes his children as “very creative,” assisting in the editing process. His wife plays a large part as well by critiquing his work.

What he loves most about the Church is its openness to all people. “Whether you are a small farmer in Australia or in the backwoods of Harlem, it’s a place for you. It’s like God’s house here on earth. … It will prevail against the gates of hell and it will stand.

“But” he added, “it’s so important, at this time, that we really become who we need to become.”