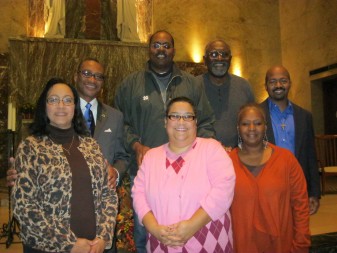 Members of the Diocesan Black Catholic Advisory Board from left, front, Wendy Summers, Leslie Morgan and Annie Tardy, and back, James Summers, Jenario Morgan, Holy Cross Brother Roy Smith and Deacon Melvin Tardy. The board was formed after their experience at the National Black Catholic Congress in Indianapolis last July, and is working on a pastoral plan for the diocese.

By May Lee Johnson

SOUTH BEND — The Diocese of Fort Wayne-South Bend Black Catholic Advisory Board is determined to make a stronger black presence in the Catholic Church and around the diocese.

Since their first meeting after attending the National Black Catholic Congress XI that was held in Indianapolis in July the group has been working on a plan. Soon they will be ready to reach out to black Catholics to share the richness of their traditions and culture with others in the diocese in meaningful ways.

One theme of the congress was faith in action and the board is currently working on a plan of action.

November is considered Black Catholic History month and the Diocese of Fort Wayne-South Bend wanted to recognize that history. It all began in 1990, during a convention at Fordham University in New York, where the National Black Catholic Clergy Caucus of the United States voted to establish November as Black Catholic History Month. November was chosen because of the number of important dates associated with the world’s Black Catholics that fall within this month. Dates such as Nov. 1, All Saints’ Day — an opportunity to incorporate the lives of the hundreds of black saints, especially in the first 300 years of the Church, and Nov. 2, All Souls Day — a time to remember all those Africans lost to cruel treatment in the Middle Passage crossing of the Atlantic Ocean, according Black Catholic Congress website.

Rcognizing the rich history of black Catholics, a follow-up meeting with the members of local parishes who attended the National Black Catholic Congress in July occurred. Members of the newly formed Diocese of Fort Wayne-South Bend Black Catholic Advisory Board discussed their plan now that the congress is over.

“In July, after I returned from the National Black Catholic Congress I was on fire!” said Wendy Summers of St. Pius X in Granger, and a member of the board. “In my home parish I am well fed spiritually, and although St. Pius X is a welcoming community, I still lack a cultural connection with my faith. I came home from Indianapolis and thought, ‘now what?’ Then my husband, James and I were contacted and asked to be part of the Diocese of Fort Wayne-South Bend Black Catholic Advisory Board. I understood this was the next step.”

“This is what I feel called to be a part of,” Summers added. “But right now it is a little difficult to see as we have only met once as a group. I think we have agreed this is something we want to move forward with. As of right now, we are still working on a plan.”

According to Mary Glowaski, Secretariat for the Office of Evangelization and Special Ministries in the diocese, the board was formed to help those who serve the diocese to consider the gifts and needs of black brothers and sisters.

“This board is newly formed and still developing. Our hope is to consider how we can develop a local response to the national pastoral plan issued by the NBCC this year,” she said. “Those who attended the first gathering of the advisory board were passionate and excited about the opportunity to begin exploring ways for the diocese to embrace the gifts and traditions of our black community members.”

According to board member Wendy Summers the initial board meeting determined to move forward with embarking on developing a pastoral plan that for the diocese, being more responsive to the needs of black Catholics, evangelizing those who are currently unchurched or attending churches of other faiths, improving catechesis for black Catholic youth, especially those not attending Catholic schools, deepening spiritual knowledge through Bible study, adult faith formation, day of reflection, and more, and educating not only black Catholics but all Catholics in the diocese on the rich history of black Catholics in this country.

“I have already suggested some ideas to the bishop and Today’s Catholic newspaper ways for parishes integrating programs acknowledging the gifts like the music and oral traditions celebrating black saints and their lives,” said Jenario Morgan, member of Holy Cross Parish in South Bend. “Every ethnicity is unique and offers a special message, but from the African-American perspective it is more communal. Like during the peace of Christ, a more physical embrace is a part of the African-American tradition. And holding hands during the ‘Our Father’ helps promote unity.”

The diversity of the team members on the Diocese of Fort Wayne-South Bend Black Catholic Advisory Board provides a unique perspective on ways to reach Black Catholics across the diocese and has the support of Bishop Kevin C. Rhoades. Mary Glowaski reports, “Bishop Rhoades has a deep appreciation for the traditions that have and will continue to enrich our faith.”