VATICAN CITY (CNS) — Inspiring “missionary disciples” rather than church-maintenance workers and building up the unity of the Church in a polarized world were some of the topics on the table when 26 U.S. bishops met Pope Francis Dec. 12.

Even though the pope was running 40 minutes late — and apologized profusely for it — the bishops of Illinois, Indiana and Wisconsin spent “two hours and 18 minutes” conversing with him, said Archbishop Jerome E. Listecki of Milwaukee.

“Here’s one of the most important figures in the world and he gives us two hours and 18 minutes,” the archbishop said. “That says a lot about his pastor’s heart, about his generosity, about the fact that he likes being with bishops and talking about the things that matter to the Church.” 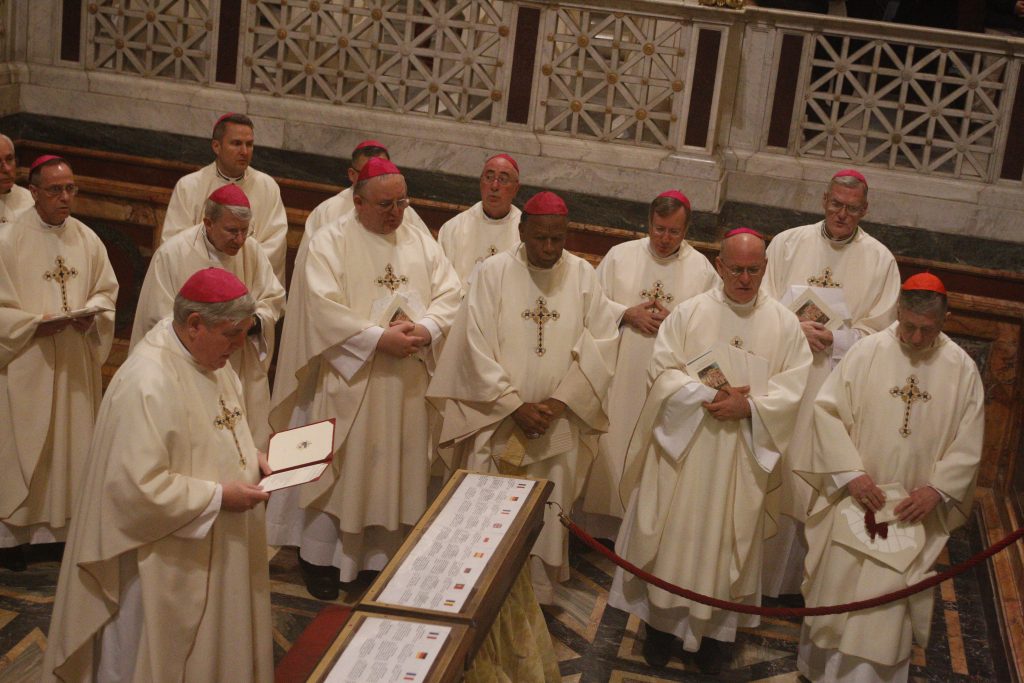 U.S. bishops from Illinois, Indiana, and Wisconsin pray at the tomb of St. Paul after concelebrating Mass at the Basilica of St. Paul Outside the Walls in Rome Dec. 10, 2019. The bishops were making their “ad limina” visits to the Vatican to report on the status of their dioceses to the pope and Vatican officials. (CNS photo/Carol Glatz)

Bishop Kevin C. Rhoades of Fort Wayne-South Bend, Indiana, said that thinking about the meeting, “I could imagine Peter sitting down with the apostles and sharing some of their concerns and challenges, some of their strategies for evangelization, whatever — I kind of felt that.”

Every bishop was free to ask questions or talk about this diocese, the bishop said. The pope “would respond with his observations or his counsel, his experiences — that was very neat because he would share his experiences as bishop or other experiences back home in Argentina.”

“I feel a strengthened bond with the Holy Father,” Bishop Rhoades said, especially after “feeling that care that he has for us. It’s genuine. There was a real sense of solidarity or communion.”

Some Twitter accounts and media reports continue to feed a narrative that the U.S. bishops are divided among themselves and that Pope Francis and many U.S. bishops aren’t exactly on the same page, but Archbishop Listecki said, “You couldn’t tell that from the meeting.”

Archbishop Listecki said the “ad limina” visit gives bishops an opportunity to dialogue with the pope, “understand and affirm him in so many things he has done” and to ask for clarification of things that may be unclear.

Bishop Rhoades said the topic of divisions between the bishops and pope didn’t come up “because it’s not true.”

“The issue of unity did come up; the importance of unity within the Church at large,” he said. “Being instruments of unity is really important,” but that does not mean all bishops have to think alike, but they always must speak with love for one another.

“There is a polarization in our culture and, in my opinion, that seeps into the Church and it is not healthy,” Bishops Rhoades said. “The Lord himself prayed for his disciples that they may be one and we need to continue to pray that prayer and to work for unity.”

The bishops raised questions, concerns, asked advice and, several times, thanked Pope Francis for his teaching and ministry, especially his document on young people, “Christus Vivit,” and the message he sent to the National Catholic Youth Conference in Indianapolis.

Bishop Rhoades said that in the meeting, like in the document, Pope Francis emphasized the need to accompany young people, who are always on the move, and “the importance of authenticity.”

Archbishop Listecki said Pope Francis urged the bishops to draw hope from “seeing the light” that shines forth from Catholics who are living and practicing and sharing the faith.

“Evangelization was a very important issue” and was brought up repeatedly during the meeting, he said. Everyone in the room agreed that bishops, priests and laity all “have to take charge for the mission of the Church and not only remain in a maintenance mode.”

The pope’s teaching during the meeting, he said, “was peppered with his personal experience” as a priest and bishop, so the bishops heard not only what the pope thinks but “what is driving his understanding” of various situations.

The clerical sexual abuse crisis was discussed, Archbishop Listecki said, but mostly from the point of view of how other priests are hurting because of the crimes of their brothers.

One thing the pope emphasized, he said, was the need for bishops to be a father to their priests, not just their superior or supervisor. They have a right to have a bishop interested and engaged in their personal well-being.

The abuse crisis and the Church’s need to continue responding vigorously and vigilantly came up repeatedly during the bishops’ meetings at Roman Curia offices, he said. 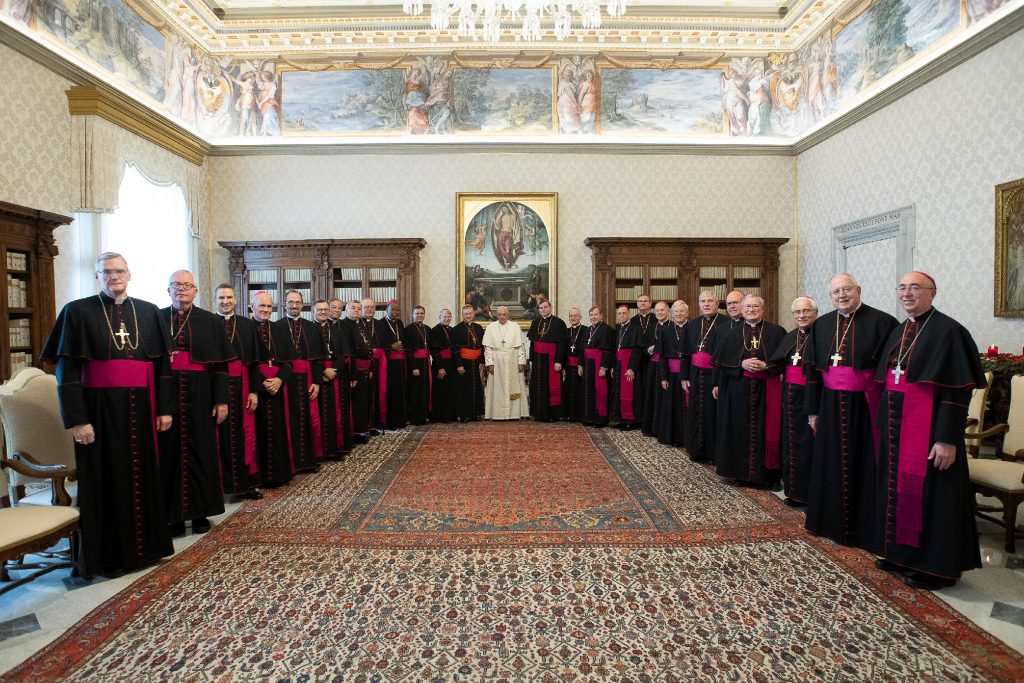 Pope Francis repeatedly told the bishops, “primo” or first, is prayer, Archbishop Listecki said. On their “ad limina” visits to Rome, the bishops celebrated Mass at the Basilicas of St. Peter, St. Paul Outside the Walls, St. Mary Major and St. John Lateran.

The bishops of Illinois, Indiana and Wisconsin also spoke to the pope about the Latino communities in their dioceses and were invited to concelebrate Mass with Pope Francis Dec. 12 for the feast of Our Lady of Guadalupe. “That is special to me,” Bishop Rhoades said. “That will be the icing on the cake, so to speak.”

Like any Catholic who makes a pilgrimage to the four basilicas, the bishops can receive a plenary indulgence if they recite the Creed, pray for the intentions of the pope, go to confession and receive the Eucharist. “I’m counting on that — wiping away those sins,” Archbishop Listecki said.