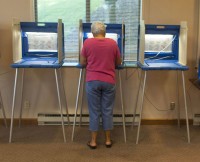 A woman casts her ballot in Glendale, Wis., during a recall election in early August. A new introduction to the U.S. bishops' document on political responsibility reminds Catholics that some issues "involve the clear obligation to oppose intrinsic evils which can never be justified," while others "require action to pursue justice and promote the common good." (CNS photo/Darren Hauck, Reuters)

WASHINGTON (CNS) — A new introduction to the U.S. bishops’ document on political responsibility reminds Catholics that some issues “involve the clear obligation to oppose intrinsic evils which can never be justified,” while others “require action to pursue justice and promote the common good.”

The brief Introductory Note to the 2011 reissue of “Forming Consciences for Faithful Citizenship” was signed by the president of the U.S. Conference of Catholic Bishops and the chairmen of nine USCCB committees. It was approved by the bishops’ Administrative Committee at its mid-September meeting and made public Oct. 4.

The introduction says that “Faithful Citizenship,” one in a series of documents that have been issued before every presidential election for nearly 35 years, “has at times been misused to present an incomplete or distorted view of the demands of faith in politics” but “remains a faithful and challenging call to discipleship in the world of politics.”

“It does not offer a voters guide, scorecard of issues or direction on how to vote,” the introduction adds. “It applies Catholic moral principles to a range of important issues and warns against misguided appeals to ‘conscience’ to ignore fundamental moral claims, to reduce Catholic moral concerns to one or two matters, or to justify choices simply to advance partisan, ideological or personal interests.”

The introduction lists six “current and fundamental problems, some involving opposition to intrinsic evils and others raising serious moral questions:”

• Abortion “and other threats to the lives and dignity of others who are vulnerable, sick or unwanted.”

• “Intensifying efforts to redefine marriage” or to undermine it as “the permanent, faithful and fruitful union of one man and one woman.”

• An economic crisis that has increased national and global unemployment, poverty and hunger, requiring efforts to “protect those who are poor and vulnerable as well as future generations.”

• “The failure to repair a broken immigration system.”

• “Serious moral questions” raised by wars, terror and violence, “particularly the absence of justice, security and peace in the Holy Land and throughout the Middle East.”

The introduction calls the U.S. Catholic Church “a community of faith with a long tradition of teaching and action on human life and dignity, marriage and family, justice and peace, care for creation and the common good.”

American Catholics “are also blessed with religious liberty which safeguards our right to bring our principles and moral convictions into the public arena,” it adds.

“These constitutional freedoms need to be both exercised and protected, as some seek to mute the voices or limit the freedoms of religious believers and religious institutions,” it says.

Urging Catholics to “share the message of faithful citizenship and to use this document in forming their own consciences, the Introductory Note adds that “this kind of political responsibility is a requirement of our faith and our duty as citizens.”

The document it introduces remains unchanged since its approval by the full body of bishops at their November 2007 meeting in Baltimore. It “represents the continuing teaching of our bishops’ conference and our guidance for Catholics in the exercise of their rights and duties as participants in our democracy,” the introduction says.

The USCCB is launching a new website for “Forming Consciences for Faithful Citizenship” at www.usccb.org/issues-and-action/faithful-citizenship/. It will offer a wide range of web-based and written materials and tools to assist pastors, parishes, Catholic organizations and individuals.

The document with the new Introductory Note will be available in print by the end of October and is already available online: www.usccb.org/issues-and-action/faithful-citizenship/upload/Forming-Consciences-for-Faithful-Citizenship-2011.pdf.