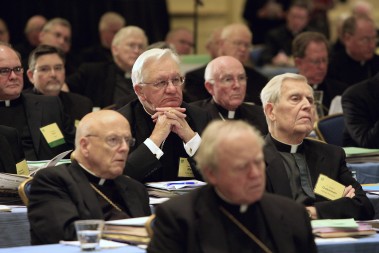 Members of the U.S. Conference of Catholic Bishops completed their public work at midmorning Nov. 18 and spent the rest of the day in executive session. Bishop Michael J. Hoeppner of Crookston, Minn., was to lead them in a morning of prayer and reflection Nov. 19.

The approximately 300 bishops meeting in Baltimore also heard a preliminary report on the “Causes and Context Study” on clergy sex abuse being conducted by the John Jay College of Criminal Justice and a staunch defense of the Catholic Campaign for Human Development against charges that it funds groups that opposed church social or moral teachings.

They passed a $144.5 million budget for the USCCB in 2010 and approved a 3 percent increase in 2011 in the assessment on dioceses to fund the work of the conference, as well as priorities and plans and an operational strategy for the next two years.

The bishops made their own an earlier statement by Cardinal Francis E. George of Chicago, USCCB president, pledging continued efforts to keep health care legislation abortion-neutral and thanking House members who had supporting those efforts.

With overwhelming majority votes Nov. 17, the bishops approved the final five documents related to the Roman Missal — translations of the proper of the saints, specific prayers to each saint in the universal liturgical calendar; the commons, general prayers for celebrating saints listed in the “Roman Martyrology”; the Roman Missal supplement; the U.S. propers, a collection of orations and formularies for feasts and memorials particular to the U.S. liturgical calendar; and U.S. adaptations to the Roman Missal.

Each section must now go to the Vatican for approval before the missal comes into use in the United States, probably in 2011.
Approval of the pastoral letter “Marriage: Love and Life in the Divine Plan” also came Nov. 17, despite the concern voiced by some bishops about the document’s pastoral tone and content.

Nearly 100 changes in two rounds of amendments preceded the 180-45 vote, with three abstentions. Two-thirds of the USCCB membership, or 175 votes, were required for passage of the document. Final approval came after an effort to remand the document to committee failed 56 to 169.
The pastoral on marriage offers support to married couples and affirms true marriage can involve only a man and a woman. It is another component in the bishops’ National Pastoral Initiative for Marriage, which began in November 2004.

The 15-page document “Life-Giving Love in an Age of Technology” says that although the Catholic Church shares the pain of married couples facing infertility problems, some reproductive technologies “are not morally legitimate ways to solve those problems.” It was approved Nov. 17 by a vote of 220-4, with three abstentions.

Cardinal Justin Rigali of Philadelphia, chairman of the USCCB Committee on Pro-Life Activities, said the new document would “fill a true pastoral need” among U.S. Catholics for a better understanding of “the difference between the Catholic understanding and the secular understanding of human life.”
The bishops also overwhelming approved a revision to the directives that guide Catholic health care facilities, clarifying that patients with chronic conditions who are not imminently dying should receive food and water by “medically assisted” means if they cannot take them normally.

“As a general rule, there is an obligation to provide patients with food and water, including medically assisted nutrition and hydration for those who cannot take food orally,” says the revised text of the “Ethical and Religious Directives for Catholic Health Care Services” prepared by the U.S. bishops’ Committee on Doctrine.

“This obligation extends to patients in chronic conditions (e.g., the ‘persistent vegetative state’) who can reasonably be expected to live indefinitely if given such care,” the new text adds.

The bishops spent an hour Nov. 17 hearing and discussing a preliminary report on the John Jay study of the causes and context of clergy sexual abuse of minors.

Researchers Karen Terry and Margaret Smith told the bishops that early findings confirm “a steep decline” in sexual abuse cases after 1985. The findings also show diocesan responses to incidents of sex abuse have changed substantially over a 50-year-period, with an increase in administrative leave for accused abusers and a decrease in the number accused abusers reinstated.

They also said information they have gathered so far shows no indication that homosexuality increases the chance that a person will be an abuser.
Commissioned by the bishops, the full study is expected to be released in December 2010.

The bishops ended the day Nov. 17 with a report from Bishop Roger P. Morin of Biloxi, Miss., CCHD subcommittee chairman, who responded to an attack from a coalition of Catholic groups promoting a boycott of this year’s CCHD collection the weekend of Nov. 21-22. The coalition claims some organizations that receive funding are not in line with church teaching.

Bishop Morin called such claims “outrageous” and pledged “our ongoing efforts to ensure that all CCHD funds are used faithfully, effectively and in accord with Catholic social and moral teaching.”

The essential mission of CCHD is “to help the poor overcome poverty,” he said. “If any CCHD-funded group violates the conditions of a grant and acts in conflict with Catholic teaching, CCHD funding is immediately terminated.”

In other action Nov. 17, the bishops approved a $144.5 million budget for 2010, representing an increase of less than 0.2 percent over 2009, and a 3 percent increase in the diocesan assessment to support the work of the USCCB in 2011. They also approved a priority plan titled “Deepen Faith, Nurture Hope, Celebrate Life” and a series of “strategy and operational plans” for offices and departments of the USCCB for the next two years.
On Nov. 16, the first day of the meeting, the bishops heard a report on health care reform and reaffirmed as a body Cardinal George’s statement expressing the bishops’ commitment to keep health reform legislation in the Senate abortion-neutral.

A successful effort by USCCB leaders and staff members to press lawmakers to keep abortion out of the House’s Affordable Health Care for America Act provides an example for the future, according to the chairman of the USCCB Committee on Domestic Justice and Human Development.
“It was a good example of how we as a conference can work together to have a positive influence on legislation,” said Bishop William F. Murphy of Rockville Centre, N.Y., in a report to his fellow bishops.

Archbishop Timothy M. Dolan of New York delivered a report on the activities of Catholic Relief Services, which included a four-minute video. He praised CRS, the U.S. bishops’ overseas relief and development agency, for its “life-saving work.”

The meeting opened Nov. 16 with talks by Cardinal George and Archbishop Pietro Sambi, the Vatican’s nuncio to the United States. Its public sessions ended at midmorning Nov. 18 with a viewing of the first of several planned videos promoting marriage and a report on the state of vocations to the religious life.
– – –
Contributing to this story were Patricia Zapor, Nancy Frazier O’Brien and Mark Pattison in Baltimore.