BALTIMORE (CNS) — Participants in a racism listening session sponsored by the Archdiocese of Baltimore April 29 brought a variety of experiences to the attention of Baltimore’s bishops and an audience of more than 250.

Speakers gave examples of being questioned about their presence on church property simply for being black, of having difficulty entering the seminary because of race, being called the N-word when distributing holy Communion at a hospital and feeling unwelcome in the Church.

The listening session was prompted by the U.S. bishops’ 2018 pastoral “Open Wide Our Hearts: The Enduring Call to Love — A Pastoral Letter Against Racism,” which calls racist acts sinful because they violate justice.

Bishop Shelton J. Fabre of the Diocese of Houma-Thibodaux, Louisiana, chairman of the U.S. bishops’ Ad Hoc Committee Against Racism, told the audience in his opening remarks that these listening sessions help the bishops understand the “aching pain” of people affected by racism.

The Baltimore event was the sixth such session he had attended. Other sessions took place in St. Louis; St. Petersburg, Florida; Cincinnati; Philadelphia; and Houma-Thibodaux, Louisiana. More sessions are scheduled to take place in upcoming weeks and months. 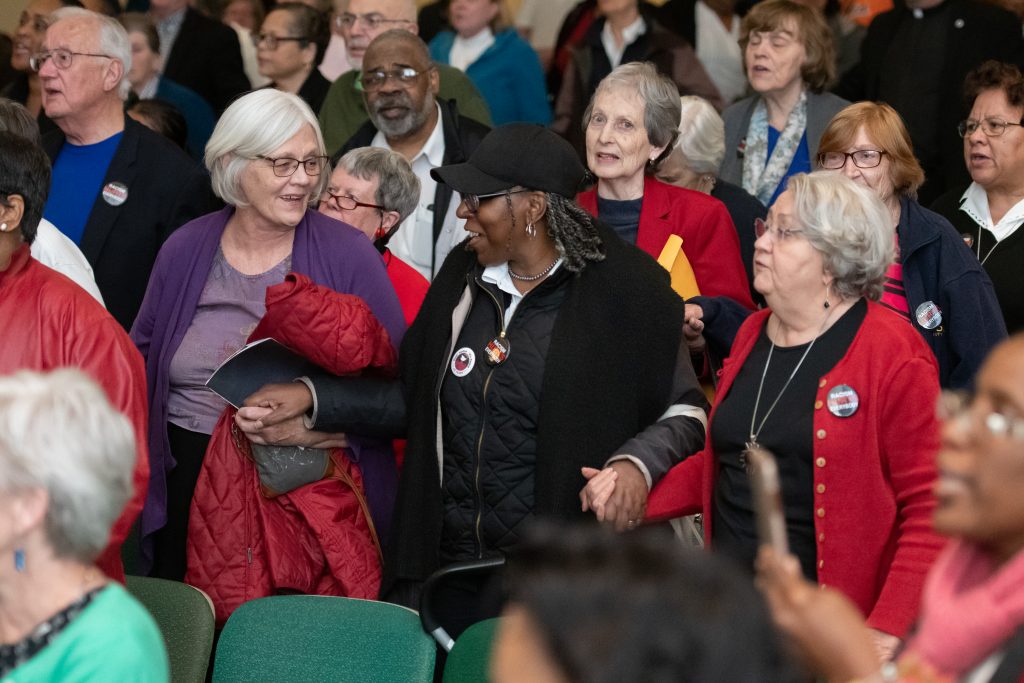 Carol Rice, Deborah Reddy and Joan Stine stand in solidarity during the closing song, “Let there be Peace on Earth,” during a listening session on racism at Notre Dame of Maryland University in Baltimore April 29, 2019. (CNS photo/Kevin J. Parks, Catholic Review)

Redemptorist Father William Guri, a priest from Zimbabwe who is studying at Loyola University of Maryland and lives and assists with ministry at St. Mary Parish, Annapolis, recounted how he had been walking in the gardens behind the rectory — not wearing his clerical garb — when he noticed a couple taking wedding photos. He deliberately stayed at the opposite end of the gardens so as not to disturb them.

A white man whom Father Guri did not recognize as a parishioner confronted him, asked him what he was doing in the gardens and told him he should leave immediately because he was on private property and his presence was not welcome.

The priest said he explained that he was a priest who lived on the grounds and the man was shocked.

Father Guri said, “I asked him: ‘What were you going to do, to call the police on me or simply to draw and shoot at me? Is this how you treat people like me?’” He said he “wondered that if my black presence was such a threat in a private garden area, how much of a threat is my blackness perceived by one like this man on the sanctuary while I am celebrating the Eucharist?”

He said the fact that this incident occurred in the backyard of the rectory where he lives “awakened me to the reality that there are some people to whom I can never be good enough for the simple reason of being black.”

Deacon Seigfried Presberry, director of the archdiocesan Prison Ministry Program, recalled a time when he was bringing Communion to a man in a hospital intensive care unit. When he introduced himself and offered the Eucharist, the man ripped off his oxygen mask and yelled: “Oh my God, we have n*****s in the Church.”

The deacon said he left the room, wanting to tell the man he was not that epithet, but a servant of God, but did not. He left the hospital feeling dejected and rejected.

His wife encouraged him to return the following week because that’s what he was called to do.

The next week, the man was still in the hospital but out of the intensive care unit. The man and his son, who had also been there the week before, apologized and when the deacon offered the Eucharist, he took it. Over the weeks, they struck up conversations and after the man’s release from the hospital, they even became friends.

The man said he had never met or talked to anyone of color before Deacon Presberry and he regretted that.

The deacon said his “dear friend” passed away several months later but had asked him to preside at his funeral rites, which he did.

Several other speakers at the event also spoke of difficult experiences.

Archbishop Lori thanked them for sharing “personal, and often very painful, stories” and added that he was “so very sorry for what you have endured, and for the ways explicitly and implicitly that the Church played a role in your experiences.”

Prior to the listening session, Bishop Fabre told the Catholic Review, Baltimore’s archdiocesan newspaper, that in previous sessions he had attended he had heard people’s pain and hope. The sessions are a model for what the bishops want to see in society. “We want people to get together, dialogue, have a conversation,” he said, noting that Pope Francis calls for the same thing — to hear people’s pain and accompany them in their journey.

“The question we are asking is how can we address this together with the richness of the teachings of the church and the sacraments? … We want to bring people to a greater understanding, bring people to action.”

Christopher Gunty is associate publisher/editor of Catholic Review Media, the media arm of the Archdiocese of Baltimore.