BALTIMORE (CNS) — Cardinal Daniel N. DiNardo of Galveston-Houston, president of the U.S. Conference of Catholic Bishops, said Nov. 14 he had opened the bishops’ fall general assembly “expressing some disappointment,” but “I end it with hope.”

“My hope is first of all grounded in Christ, who desires that the Church be purified and that our efforts bear fruit,” he told his fellow bishops in Baltimore with remarks closing the public sessions of the Nov. 12-14 meeting.

“We leave this place committed to taking the strongest possible actions at the earliest possible moment,” Cardinal DiNardo said. “We will do so in communion with the universal Church. Moving forward in concert with the Church around the world will make the Church in the United States stronger, and will make the global Church stronger.”

The disappointment came when he announced at the start, Nov. 12, the Vatican had requested the bishops delay voting on several proposals to address the sex abuse crisis and hold bishops more accountable for dealing wayward priests and other Church workers accused of sex abuse. 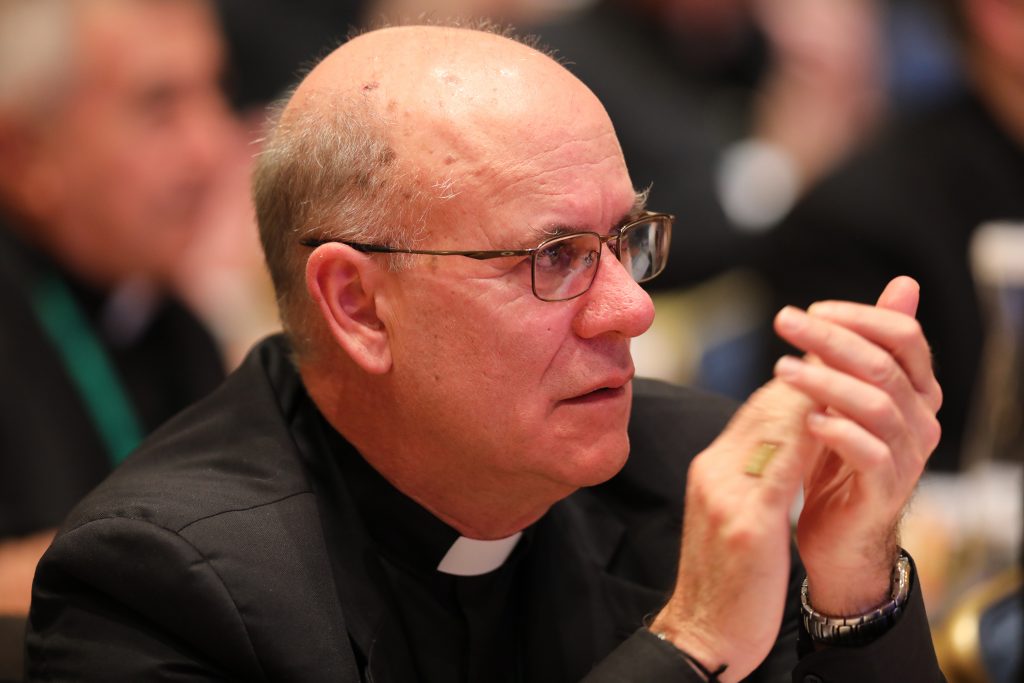 Bishop Kevin C. Rhoades of Fort Wayne-South Bend, Ind., applauds after Heather Banis, a clinical psychologist who is victim assistance coordinator for the Archdiocese of Los Angeles, spoke Nov. 13 at the fall general assembly of the U.S. Conference of Catholic Bishops in Baltimore. (CNS photo/Bob Roller)

The directive said the proposals needed to be reviewed for conformity to canon law and that action on them needed to wait until after the February Vatican meeting for presidents of bishops’ conferences worldwide to discuss the abuse crisis.

But throughout the assembly, the spotlight was on the widening abuse crisis in the U.S. Church and action the U.S. bishops must take to address it. Much of the meeting time was devoted to frank presentations and discussions about abuse.

But there were other items on the agenda, including a pastoral letter on racism that was introduced to the body of bishops as an action item Nov. 13 and voted on Nov. 14.

They overwhelmingly approved the document, “Open Wide Our Hearts: The Enduring Call to Love — A Pastoral Letter Against Racism.” It declares “racist acts are sinful because they violate justice.”

“They reveal a failure to acknowledge the human dignity of the persons offended, to recognize them as the neighbors Christ calls us to love,” it adds.

The vote for passage was 241-3 with one abstention. It required a two-thirds vote by all bishops, or 183 votes, for passage. 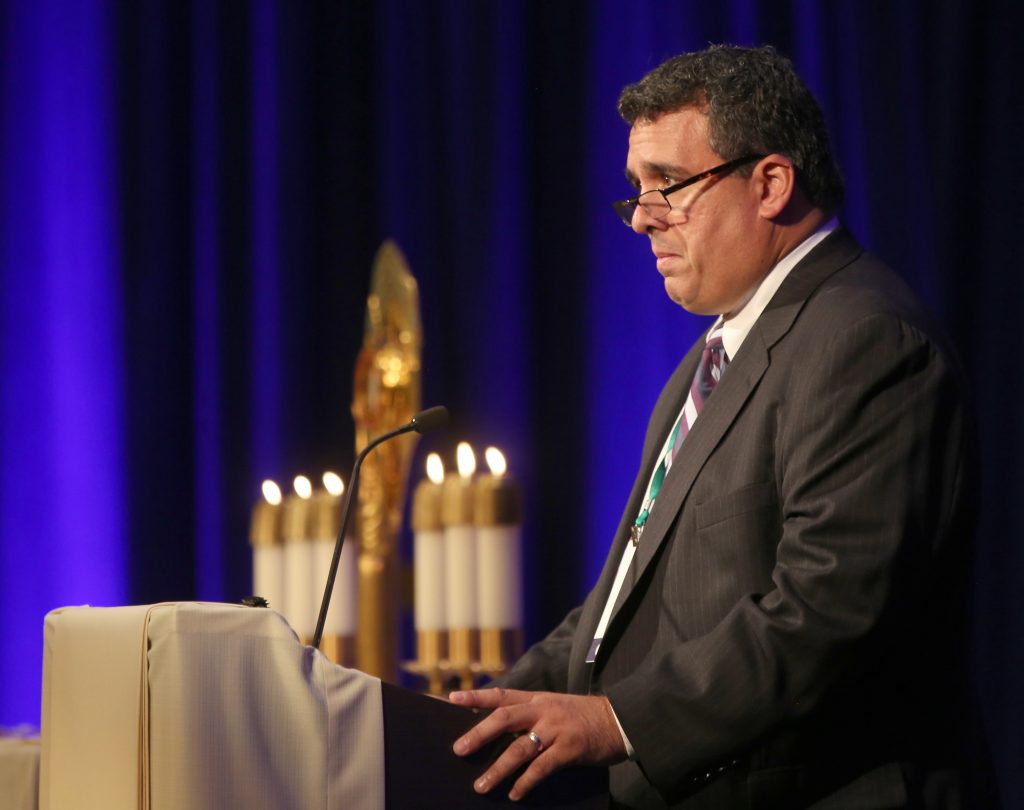 Luis A. Torres Jr., an abuse survivor, speaks to bishops in the chapel during a day of prayer Nov. 12 at the fall general assembly of the U.S. Conference of Catholic Bishops in Baltimore. (CNS photo/Bob Roller)

Also on the final day’s agenda the bishops gave unanimous support for the advancement of the canonization cause of Sister Thea Bowman on the diocesan level — the Diocese of Jackson, Mississippi, headed by Bishop Joseph R. Kopacz. It is the diocese where Sister Bowman grew up and also where she ministered in her last years while taking care of her aging parents and subsequently fighting cancer herself.

The great-granddaughter of slaves, Sister Bowman was the only African-American member of the Franciscan Sisters of Perpetual Adoration. She transcended racism to leave a lasting mark on Catholic life in the United States in the late 20th century.

Other agenda items for the last day of the meeting included the approval of a budget for 2019, which reflected increased expenses related to the new clergy sex abuse crisis and a downward trend in the USCCB’s Office of Migration and Refugee Service’s budget due to federal cuts in refugee resettlement funds.

They also heard reports on September’s V Encuentro held in Grapevine, Texas, and October’s Synod of Bishops on “Young People, the Faith, and Vocational Discernment.”

Regarding the synod, Bishop Frank J. Caggiano of Bridgeport, Connecticut, who was a synod delegate, said the event was a moment of great grace that needs attention of Church leaders now to implement it on the diocesan level.

The bishops voted for Bishop Gregory L. Parkes of St. Petersburg, Florida, as treasurer-elect of the U.S. Conference of Catholic Bishops. He’ll take office for a three-year term next November at the end of the general assembly, succeeding Cincinnati Archbishop Dennis M. Schnurr. 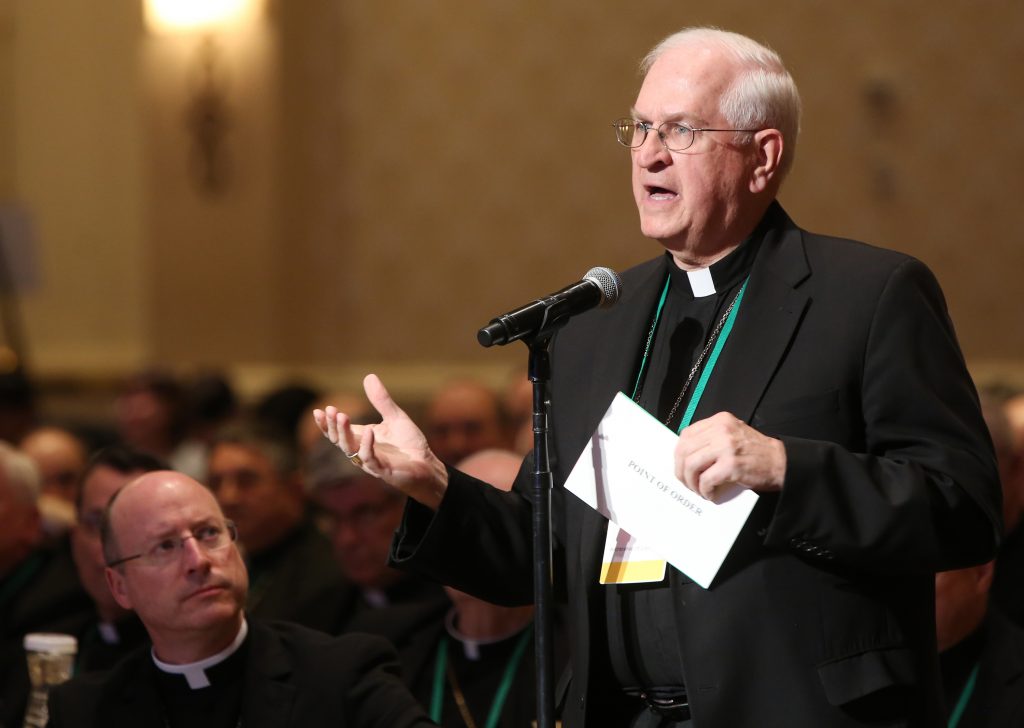 Archbishop Joseph E. Kurtz of Louisville, Ky., chairman of the U.S. bishops’ Committee for Religious Liberty, speaks from the floor Nov. 14 at the fall general assembly of the U.S. Conference of Catholic Bishops in Baltimore. (CNS photo/Bob Roller)

Votes also were cast for a new chairman of the Committee on National Collections and chairmen-elect for the committees on Catholic Education; Clergy, Consecrated Life and Vocations; Divine Worship; Domestic Justice and Human Development; Laity, Marriage, Family Life and Youth; and Migration.

Among speakers who gave presentations on the abuse crisis and called for action was the chairman of the National Review Board, Francesco Cesareo, president of Assumption College in Massachusetts.

He called for broadening the scope of the “Charter for the Protection of Children and Young People” to include bishops. He also urged publishing complete lists of credibly accused clergy in all dioceses; improving the audit process; and enhancing accountability for bishops regarding cases of abuse.

He urged the bishops to take action and continue to move solutions to abuse forward. If such action does not happen, “I fear for the future of our Church,” Cesareo said Nov. 13.

“We are facing painful times as a Church,” said another speaker, Father David Whitestone, chair of the bishops’ National Advisory Council. “The depth of anger, pain and disappointment expressed by members of the NAC cannot begin to be expressed adequately in words.”

He noted that progress has been made since the bishops adopted the charter, but he stressed that more needs to be done. “We can never become complacent. We must recommit to the ongoing care of all victims in their healing,” Father Whitestone said.

During a late-afternoon open discussion on the crisis, the case of Archbishop Theodore E. McCarrick posed the most daunting questions for the bishops.

Several said they had been hearing from people in the pews and that the laity’s questions revolved around how the hierarchy could allow Archbishop McCarrick to gain so much influence and rise to the highest ranks of the Church hierarchy if they knew of the abuse of which he is accused.

The former cardinal-archbishop of Washington is accused of abusing a minor decades ago and having sexual contact with seminarians in more recent years. He denies the allegations.

During the discussion, there also were calls for bishops to examine their relationship with Jesus and with God and to ask themselves what it means to be a shepherd in their dioceses.

The bishops also heard presentations on proposals for addressing the abuse crisis, so they could discuss them, even though the Vatican had requested they postpone voting on them.

The proposals include establishing standards of episcopal accountability; forming a special commission for review of complaints against bishops for violations of the accountability standards; and establishing a protocol regarding restrictions on bishops who were removed or who resigned over claims of sexual misconduct made against them or for grave negligence in office.

The bishops also heard from Heather Banis, a trauma psychologist who is victim assistance coordinator for the Archdiocese of Los Angeles. She told them that helping victims and survivors of child sex abuse heal is a journey that involves showing them repeated trustworthiness.

It begins with listening, understanding, offering responses showing that they, the victim-survivors, are believed, she said.

Msgr. Todd Lajiness, rector of Sacred Heart Major Seminary in Detroit and president of the National Association of Catholic Theological Schools, outlined feedback given by some U.S. seminary rectors on promoting “celibate chastity” among seminarians as well as having listening sessions with seminarians, taking “a fresh look at boundaries,” and providing “new pathways for reporting” abuse allegations.

In his presidential address Nov. 12, Cardinal DiNardo took note of the historic nature of this year’s meeting. “Whether we will be remembered as guardians of the abused or of the abuser will be determined by our action beginning this week and the months ahead,” he said.

Archbishop Christophe Pierre, apostolic nuncio to the United States urged them to face the issue of clergy sexual abuse straight on, not to run from the challenges that confront them but “face them realistically and courageously.”

Most of the first day of the assembly was set aside for prayer and reflection by the bishops in a makeshift chapel at the Baltimore Marriott Waterfront.

During that time, they heard from two victim-survivors what they have endured: Luis A. Torres Jr. and Teresa Pitt Green. Both painfully painted the landscape that has brought the U.S. Catholic Church to the urgent need to address the sex abuse crisis.

The day ended with the celebration of Mass. In his homily, Archbishop Bernard A. Hebda of St. Paul and Minneapolis urged his brother bishops to give their all to addressing the abuse crisis and show a commitment to change what needs to be changed to put an end to any abuse.

Throughout the meeting, outside the hotel, protesters continued to gather to call for change and urge more action by the bishops to address the abuse crisis.