BALTIMORE (CNS) — The U.S. bishops added their assent to a call to have St. Irenaeus declared a doctor of the Church.

The action came Nov. 12, the second day of their Nov. 11-13 fall general meeting in Baltimore.

“This is perhaps a way to correct an oversight of history,” said Bishop Kevin C. Rhoades of the Diocese of Fort Wayne-South Bend, chairman of the U.S. bishops’ Committee on Doctrine.

St. Irenaeus was born sometime between A.D. 120 and A.D. 130 in Smyrna in Asia Minor, according to Bishop Rhoades. He was a disciple of St. Polycarp, who was himself a disciple of St. John the Apostle, he added. He died around 202, and the Catholic Church also deems him to be a martyr.

St. Irenaeus’ ministry took him to present-day France. There, he waged theological battle against the Gnostics, who emphasized personal spiritual knowledge over faith in orthodox teachings and in ecclesiastical authority. This is relevant, Bishop Rhoades said, because “we see a reemergence of gnostic ideas and what it means to be human.” 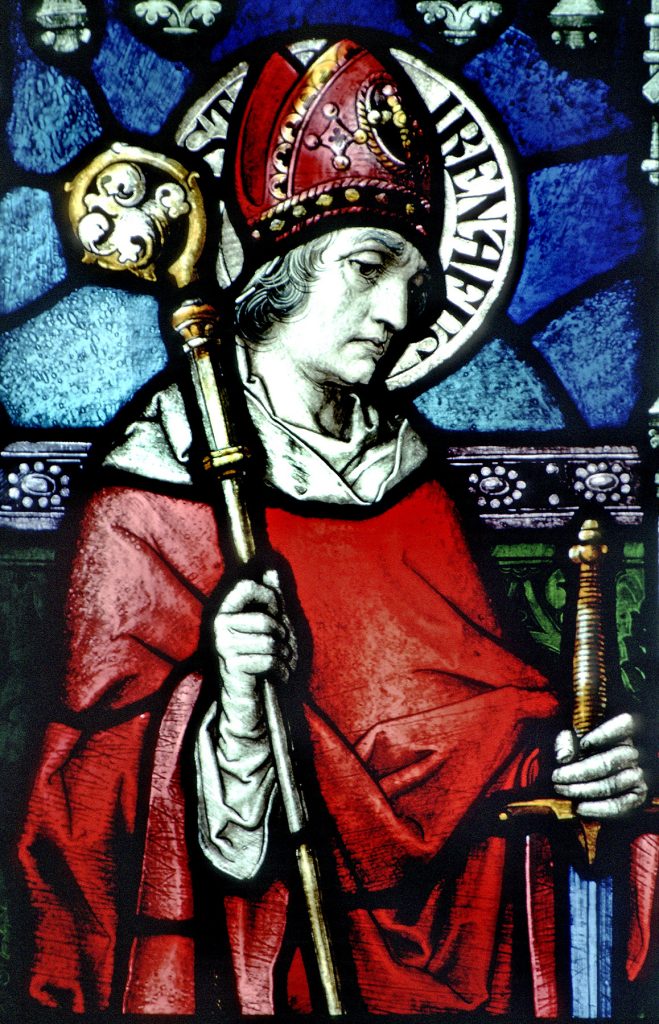 The likeness of St. Irenaeus is seen at the Basilica of Our Lady Immaculate in Guelph, Ontario. The U.S. bishops Nov. 12, the second day of their fall general assembly in Baltimore, added their assent to a call to have the saint declared a doctor of the church. (CNS photo/The Crosiers)

At a time when much in the early Christian Church had yet to be codified, St. Irenaeus wrote the book “Against Heresies,” and is credited with being the first to declare the Gospels of Matthew, Mark, Luke and John to be read by all Christians.

There are 36 declared doctors of the Church. As doctors — think “teachers” — they are recognized for their significant contributions to theology or doctrine through their research, study and writing.

The first four doctors, declared in 1298, are St. Gregory the Great, St. Augustine, St. Ambrose and St. Jerome. The last three, all declared in this decade, are St. John of Avila and St. Hildegard of Bingen, both in 2012, and St. Gregory of Narek in 2015.

Half of the doctors lived prior to the Latin-Orthodox schism of 1054, and they are generally regarded in high esteem by the Orthodox, although they do not use the phrase “doctor of the church.”

How does one become a doctor of the Church?

“It typically begins with the originator of the cause for sainthood who has already done the extensive research and analysis required,” said a message from Bishop Rhoades. However, since St. Irenaeus was canonized before the schism — the Orthodox also consider him a saint — that does not apply here.

“If there is a desire to have the saint named a doctor of the Church, the promoter of the cause must do further research and study and reach out to solicit broader consensus across nations that this would be a worthy pursuit,” Bishop Rhoades said. “The congregation has said that the support of entire episcopal conferences is very helpful in discerning these types of petitions.”

Msgr. Jeffrey N. Steenson, the retired head of the Personal Ordinariate of the Chair of St. Peter — established by Pope Benedict XVI for former Anglicans who have joined the Catholic Church — waxed enthusiastic about St. Irenaeus’ virtues.

He added, “St. Irenaeus again is an incredibly important patron and saint today in rebuilding the Church of God,” calling him “the first systematic theologian of the Church, literally, the first text that we have that speaks to the role of the Blessed Virgin Mary in the life of the Church,” He said that the notion of Mary as mother of the Church originated with St. Irenaeus.

The request came to the U.S. bishops from Cardinal Philippe Barbarin of Lyon, France — the region where St. Irenaeus ministered — as the diocese is preparing a yearlong celebration of the saint in 2020. “The cardinal particularly sees Irenaeus’ teachings as speaking to our times, when there seems to be a reemergence of gnostic ideas,” Bishop Rhoades said.