BALTIMORE (CNS) — The gathering of U.S. bishops June 11-13 in Baltimore was anything but business as usual.

“The spring meetings are usually more pastoral, and the November meeting has a heavier agenda,” said Bishop Michael F. Burbidge of Arlington, Virginia, who said this meeting had a “sense of urgency” and momentum to it, both in the smaller group gatherings and when the bishops were all together.

“We were here for specific task … and by God’s grace we will move forward,” he said during a June 12 news conference. 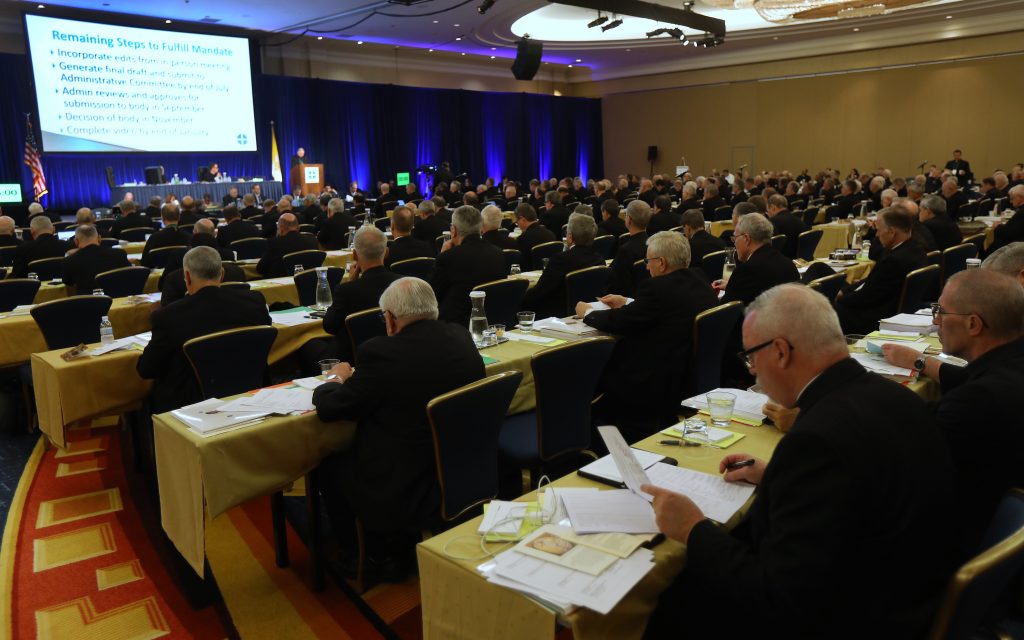 Archbishop Jose H. Gomez of Los Angeles, vice president of the U.S. Conference of Catholic Bishops, speaks on the first day of the spring general assembly of the USCCB in Baltimore June 11, 2019. (CNS photo/Bob Roller)

The bishops typically meet twice a year as a body. The spring meeting of the U.S. Conference of Catholic Bishops is usually in June at different locations each year, and sometimes it is a retreat. The fall meeting in recent years has always been in Baltimore. This year’s spring meeting was switched somewhat last minute to the Baltimore location, where the bishops were not the only ones in the hotel space but were adjacent to other conference gatherings.

The other time a spring bishops’ meeting was almost entirely devoted to the Church crisis was the 2002 meeting in Dallas, just months after the Church was reeling from a clergy sexual abuse crisis that made headlines in The Boston Globe.

Since their two general assemblies last year, the bishops have been confronted with an overwhelming need to prove to U.S. Catholics that abuse within their own ranks won’t be tolerated. They were hit with allegations last summer that one of their own, former Cardinal Theodore E. McCarrick, had committed abuses over decades. Then just a week before the spring meeting, details emerged from the Vatican-ordered investigation of retired Bishop Michael J. Bransfield of Wheeling-Charleston, West Virginia, highlighting financial and sexual improprieties.

Names of both bishops came up during the assembly at different points, when the bishops spoke about protocols to put in place to make sure these incidents wouldn’t happen again. 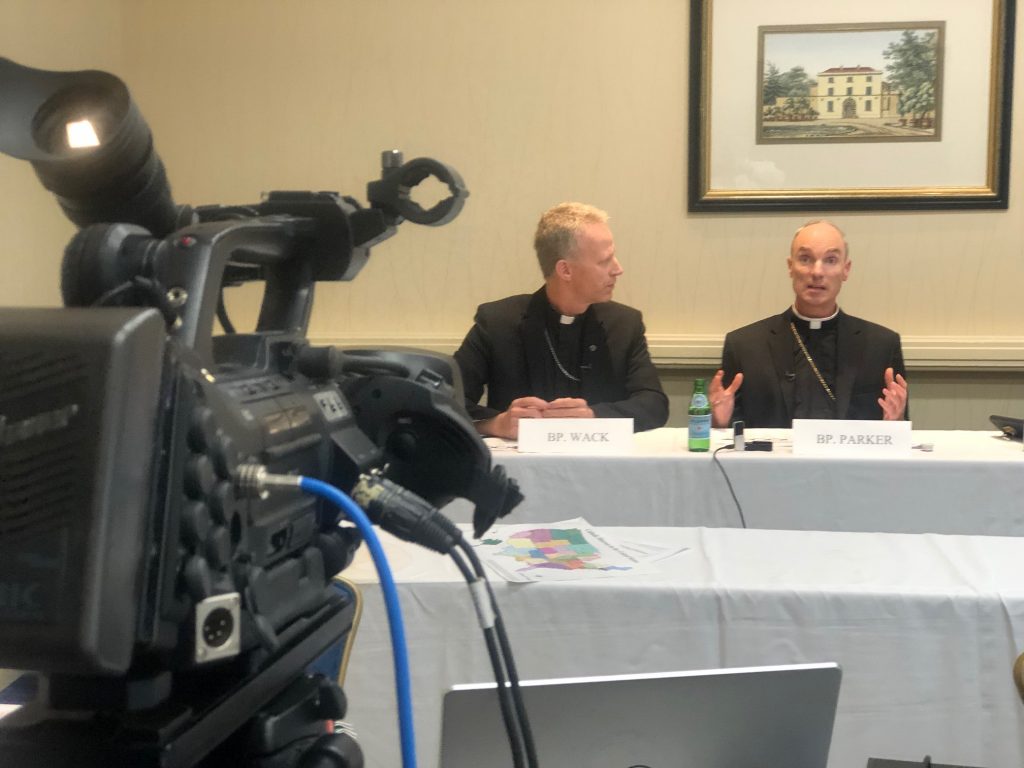 Cardinal Daniel N. DiNardo of Galveston-Houston, president of the U.S. Conference of Catholic Bishops, opened the meeting June 11 by saying: “We begin the sacred work this week of purging the evil of sexual abuse from our Church.”

But just the week before, he had faced his own accusation, which he strongly denied, of having mishandled an accusation of sexual misconduct case against his former vicar general.

The bishops also had the weight of unfinished business upon them in this spring’s gathering: policies and procedures in response to the abuse crisis that they had put aside at last year’s fall general assembly at the Vatican’s request. They also had a new, but related, item: their plan to implement Pope Francis’ norms issued May 9 to help the Church safeguard its members from abuse and hold its leaders accountable.

Although the bishops passed all the abuse measures before them, none of them said these actions would hit the reset button for the Church. In closing remarks, Cardinal DiNardo acknowledged that the steps they had taken were a “work in progress.”

They voted to implement the norms contained in the pope’s “motu proprio” on responding to sexual abuse in the Church, and they also approved all of their own measures — including a promise to hold themselves accountable to the commitments of their “Charter for the Protection of Children and Young People,” including a zero-tolerance policy for abuse.

“We, the bishops of the U.S., have heard the anger expressed by so many within and outside the church over these failures,” that document said, adding: “The anger is justified; it has humbled us, prompting us into self-examination, repentance and a desire to do better, much better. We will continue to listen.”

In other votes, the bishops approved actions they can take when a retired bishop resigns or is removed “due to sexual misconduct with adults or grave negligence of office, or where subsequent to his resignation he was found to have so acted or failed to act.” They also approved the implementation of an independent third-party system that would allow people to make confidential reports of abuse complaints against bishops through a toll-free number and online.

“It’s right we give attention to this,” Cardinal Joseph W. Tobin of Newark, New Jersey, said at the closing news conference. He said the collateral damage from the Church abuse scandal is how it is “costing people their faith.”

He also stressed that the possibility of “proceeding with what we passed today” without laypeople would be impossible and “highly irresponsible.”

Bishop Robert P. Deeley of Portland, Maine, chairman of the bishops’ Committee on Canonical Affairs and Church Governance, which oversaw the all of the abuse documents the bishops voted on, except for the third-party system, told reporters at the close of the meeting that bishops are already collaborating with the laity. We are not in a Church where the laypeople are here, and the bishops are there, he said, gesturing a gap.

Although some bishops had voiced hope on the floor June 13 that there be mandatory lay participation in Church abuse monitoring, Bishop Deeley said the bishops couldn’t “go beyond what the Holy Father has given” in the norms he issued, but that doesn’t mean laity are or will be excluded, he said.

That was precisely the point Bishop W. Shawn McKnight of Jefferson City, Missouri, hoped to bring home near the meeting’s close when he emphasized the need to involve laypeople because “it’s the Catholic thing to do.”

He said when bishops go home from this meeting, they should be able to tell people they did everything they were able to do to respond to this crisis.

He told Catholic News Service during a break in the meeting June 13 that the Church needs to get back to its origins and the Second Vatican Council’s vision of lay collaboration with clergy, adding: “Perhaps God is utilizing this crisis in a way to get us back on track again.”