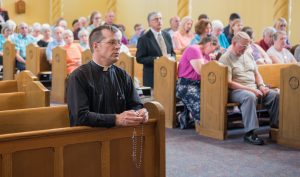 Father Daniel Whelan prays a rosary for the sick prior to a Mass celebrated by Bishop Kevin C. Rhoades at St. Felix Catholic Center, Huntington, on Aug. 19. John Martin 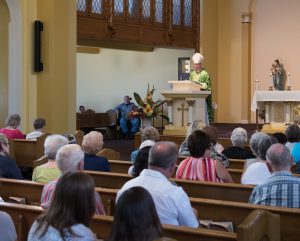 Bishop Kevin C. Rhoades addresses the gathering during the Mass for the Sick. John Martin

On Aug. 19, the group welcomed Bishop Kevin C. Rhoades as the celebrant of this Mass. Father Steven Colchin and Father Daniel Whelan concelebrated the Mass.

At the beginning of his homily, Bishop Rhoades shared that he was happy to celebrate a Mass for the Sick at St. Felix. He expressed his happiness about praying the rosary before Mass and being able to ask the Blessed Mother to pray for people who are sick and suffering, including those in attendance.

He reflected on the first reading, which came from Joshua 24:14-29. In this reading, all the tribes of Israel gathered with Joshua, who addressed them about being committed to God. The people had to choose whether to serve false gods or the Lord. The people insisted that they would serve the Lord, even after being challenged by Joshua on this declaration. They said that they would follow the Lord and obey him, even if God did not forgive them.

“This reading made me think of our commitment to serve the Lord,” Bishop Rhoades said. He said that it can be easy to turn away from the Lord when our faith is being challenged, especially by sickness or suffering. He added that some people turn away from God because of these or other tragedies, some get angry at God, and others lose their faith altogether.

The bishop posed a question, asking how someone who is sick or suffering can serve the Lord. He answered the question by reciting part of the opening prayer for the Mass, when those in attendance prayed that “the sick may know that they are chosen among those proclaimed blessed and are united to Christ in his suffering for the salvation of the world.” In addition, he stated that suffering can have meaning, and quoted Pope St. John Paul II, who called suffering “a call, a vocation.”

He linked the idea of suffering having meaning to how a suffering person can take part in Jesus’ work of salvation. He explained that a sick or suffering person who spiritually unites themselves to Jesus in his suffering in the Passion serves the Lord and the church in a powerful way. With this, he encouraged the sick to offer up their sufferings in union with Jesus through specific prayer intentions. The bishop shared that he knew of people who offered their sufferings up for loved ones who are not practicing the Catholic faith or for the souls in purgatory.

After this, Bishop Rhoades told those in attendance that as they prayed for the sick during Mass to not only pray for their healing, but also for their perseverance in faith and growth in holiness through their sharing in the suffering of Jesus. He explained that suffering is part of the mystery of the human existence and an experience of evil, but that “Jesus has transformed suffering by the power of his love and made it the means to the greatest good, eternal salvation.”

At the end of Mass, before a special blessing for the sick, Bishop Rhoades said of Father Solanus Casey, “he’s praying for us and we’re praying with him.”

Members of the Praying with Father Solanus Casey group know the importance of praying to Father Casey. Jim Bottone, secretary of the group, said its mission is “to inspire people to pray to Father Solanus when they or people they know are sick or are in distress.”

Greg Diss, president of the group, shared that he first learned of Father Casey when he joined the Knights of Columbus, Father Solanus Casey Council, at St. Elizabeth Ann Seton. He learned more about the miracles that had occurred as a result of praying to Father Casey as he talked with other people and read about him.

In 2016, Diss, along with Rich Burton, Mike Durnell, Jim Bottone and Norm Stoffel met to see if there was any interest in gathering people for a Mass at St. Felix Friary with the intent of praying to Father Casey. The group’s first Mass was in January 2017.

Besides the prayer of the rosary and Mass each month, there is a table set up for prayer requests with intentions of their own. The intentions are sent to Detroit and placed on Father Casey’s casket, “for a more personable contact with him in prayerful hope of being cured.”