Bishop Kevin C. Rhoades’ pastoral visit to Bishop Dwenger High School, Fort Wayne, on Thursday, Jan. 11, was a highlight of the new year for students and faculty. “It is always a special day for BDHS when Bishop Rhoades comes to visit,” said principal Jason Schiffli. “All of us enjoy the opportunity to celebrate Mass with Bishop, and the students love visiting with him during lunch and interacting with him in the classroom.”

The entire student body gathered in the school gymnasium for holy Mass celebrated by Bishop Rhoades and concelebrated by chaplain Father Robert Garrow. The bishop greeted the students and faculty at the beginning of the Mass, and encouraged them to dedicate the new year to the Lord, to become closer to God and to open themselves to His love. 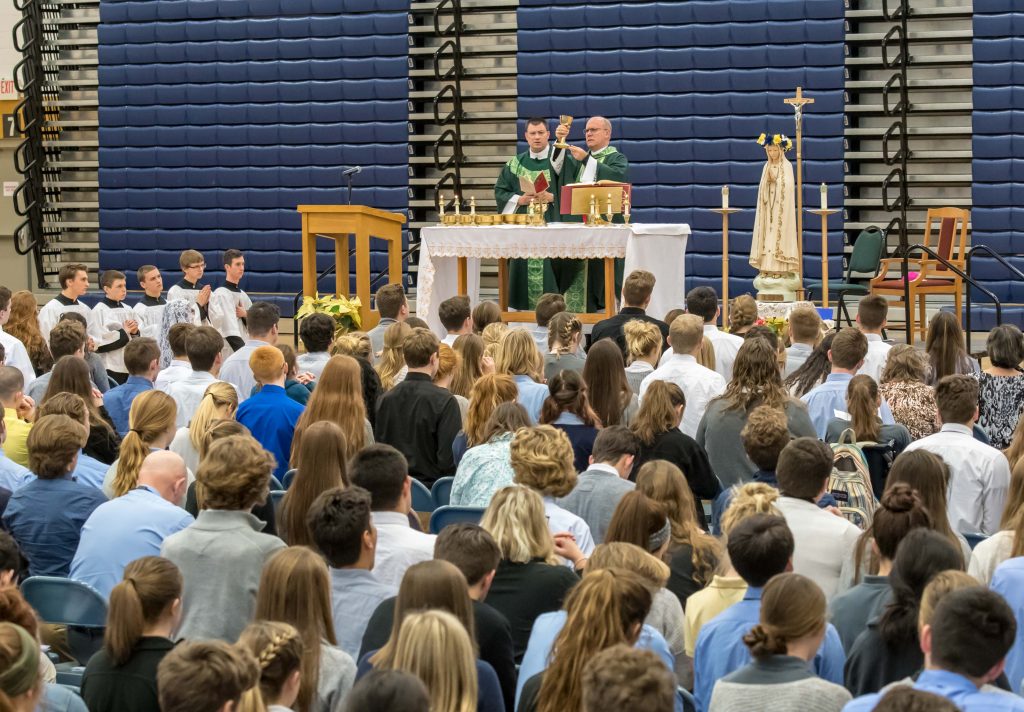 Bishop’s homily clearly resounded with the gathering of young people. He began by saying, “I’d like to talk to you this morning about victory and defeat. Throughout life we experience victories and defeats, successes and failures. It’s part of life. In sports events, you have victories and defeats. In classes and exams, you have successes and failures. … What I want to speak about in this homily is about life as a whole — victory and defeat in life as a whole.

“In the first reading from the Old Testament, we heard about a great defeat for God’s people, the people of Israel. They were defeated in battle by their enemy, the Philistines. It was a disastrous defeat … the Philistines slew about 4,000 Israelites on the battlefield. After the battle, the elders of Israel wondered why God allowed this great defeat by the Philistines and they decided to enter the next battle with the ark of the Lord, the Ark of the Covenant, with them. They went to the sanctuary of Shiloh and got the holy ark … and the whole camp of the Israelites shouted loudly, the reading tells us, when the ark arrived in the camp.” The Philistines became frightened, thinking that the gods were now on Israel’s side. … but now the Israelites suffered an even more disastrous defeat, said Bishop Rhoades. They again lost the battle and 30,000 foot soldiers, the Philistines captured the ark of the Lord and killed Eli’s two sons.

“What led to Israel’s defeat?” asked the bishop. “When you read the first book of Samuel, you learn that the people had drifted from the Lord. They were living in a worldly manner and even made idols for themselves. … They had lost their relationship with God. They no longer worshipped Him. … They were distant from God. … They had forgotten the God who had saved them in the Exodus. So they suffered a disastrous defeat. … They lost everything.

“In the Gospel we see the opposite, a victory. The leper was a person who could be considered defeated in life. He not only had that terrible disease, but he was cast off from the people because of it. He was considered unclean. He was ostracized … But what did this leper do? He came to Jesus Christ. He knelt down before Jesus and begged Our Lord to make him clean. He had faith.

“The Gospel tells us that Jesus was moved with pity. … Jesus touched him and the leper was cured. This was a victory, not a defeat. … The battle was won in two minutes. In the battle with the Philistines, it took all day and ended with defeat. What’s the difference between these two battles? The leper had faith.

“Defeat comes when we fall away from the Lord. What brings victory? Faith! We can think about the faith of that leper who humbly knelt down before the Lord and asked Him to make him clean. In life, it is faith that gives us the victory.

“Bishop Dwenger High School exists to help you win the victory in your life, to share in the great victory that was won by Jesus through His life, death and resurrection,” he summarized. “It is the victory of truth, goodness and love. (It is) victory over falsehood, evil and hatred. We need faith to win this victory in our lives. It is my prayer that we will all be part of that army of saints that have won the crown of victory, with the help of the woman who is the Queen of All Saints and who helps to win the crown of victory. May God bless all of us with the gift of faith, the faith that leads to victory, to eternal life in heaven.”

Bishop Rhoades spent the day visiting with students in the classrooms and during lunch. His first classroom visit was to Lisa Pohlman’s genetics class, which he called “an important area of study in our culture today.” The students posed several questions about gene editing, assisted reproduction, eugenics and stem cell research. Bishop explained the Church’s position on the issues, while acknowledging that some answers are still evolving as new discoveries are made in those fields. He stressed the intrinsic value of human life and the importance of a moral analysis of medical issues and urged students to use the National Catholic Bioethics website as a personal reference.

Fernanda Becker’s Spanish IV honors class afforded the bishop a chance to converse fluently in Spanish. Each student had written out a personal intention for which he led the class in prayer. They questioned him about his tenure as bishop, about his favorite foods and sports and asked him to describe his normal work day. They discovered that while his primary residence is in Fort Wayne, he has an apartment which he uses when visiting South Bend. Bishop shared that 14 parishes in the diocese offer a Spanish Mass but added, “We need more priests who can speak Spanish.”

Bishop Rhoades had the opportunity to visit with Student Council members, who greeted him warmly upon his arrival at the school, then during lunch as well. For the first time, at the request of faculty, he visited classrooms in all areas of study during the school day. Principal Schiffli called the day “extra special” because, after classes were dismissed, Bishop Rhoades met with all faculty and staff in the school library, where he shared with them highlights from the book, “Why I Am Catholic,” and presented a copy to each one.

Schiffli noted the unceasing activity in the school by saying, “We laugh about the fact that this is a building ‘that never sleeps.’ Truly, there is something happening every day … Our students are active and this involvement, both in and out of the classroom, prepares them for the future.”

Often, our students tell us that they perform better in the classroom when they are involved in an extracurricular activity.

“We are so pleased with the facility improvements we continue to make … complete overhaul of 36 classrooms, new gymnasium … and our front office renovations this summer.” He continued, “We feel especially blessed to have such a beautiful chapel on our campus, a spiritual place that is the center of our school and utilized each and every day.”