FORT WAYNE — In announcing the appointment of Msgr. Robert Schulte as pastor of St. Jude Parish in Fort Wayne, Bishop Kevin C. Rhoades expressed deep gratitude for Msgr. Schulte’s 18 years of “outstanding service to the diocese as Vicar General, and for the invaluable assistance he provided” to him and to Bishop John M. D’Arcy before him.

Bishop Rhoades remarked that the longevity of Msgr. Schulte’s ministry as Vicar General is a testament to the high regard in which he and Bishop D’Arcy, priests of the diocese and the faithful have held Msgr. Schulte through the years, and that he also believes Msgr. Schulte deserves a break from diocesan administrative duties to become a full-time pastor again. The bishop has appointed him pastor of St. Jude Parish, Fort Wayne, effective June 19.

Bishop Rhoades also announced that effective the same date, Father Mark Gurtner will succeed Msgr. Schulte as Vicar General and Moderator of the Curia, while Father Jacob Runyon succeeds Father Gurtner as Judicial Vicar. Father Gurtner will continue as pastor of Our Lady of Good Hope Parish in Fort Wayne.

The bishop expressed his confidence in making these new appointments, noting both priests’ pastoral abilities and canonical expertise. “Father Gurtner has served the diocese very well as my Judicial Vicar and has been an excellent collaborate on the Bishop’s Cabinet. Father Runyon also has served with great competence as Adjutant Judicial Vicar. Both priests are not only well-qualified for these positions, but also exhibit the pastoral charity that is an essential part of priestly ministry and assistance to the bishop in shepherding the diocese.” 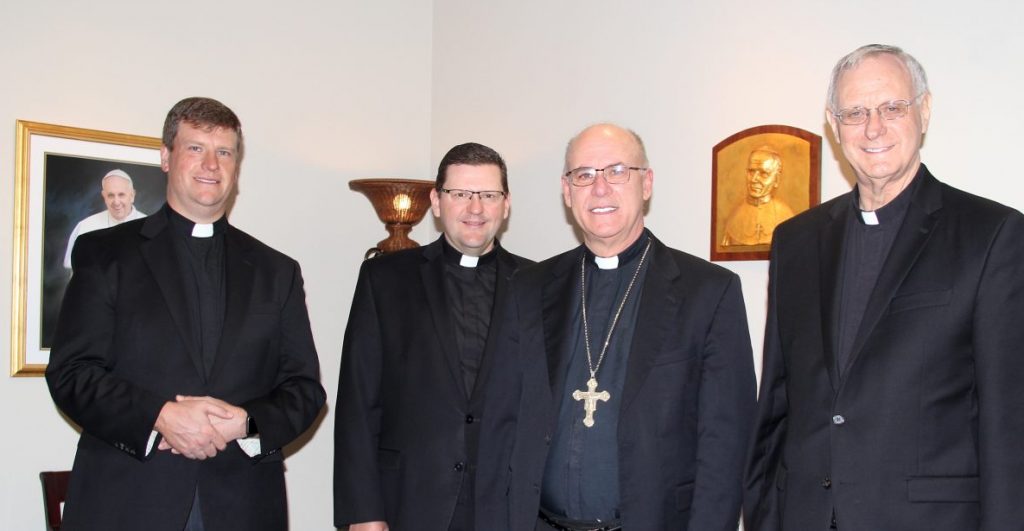 Many months ago, Msgr. Schulte said, he spoke with Bishop Rhoades about his desire to return to full-time priestly pastoral ministry in a parish.

“Since September 2000 I have served as Vicar General / Chancellor and Moderator of the Curia of the Diocese of Fort Wayne-South Bend. This has been a joy and a challenge. I chair some committees, like the Parish in Need Grants and St. Mary Heritage Fund Grants, and serve on many others. Questions, observations and complaints come to my office regularly from all over the diocese and beyond. I work with diocesan staff and those with management responsibilities to help our central office run smoothly. This all involves a lot of administration and meetings. The workload has been borne also by my longtime secretary, Mari Raatz, who fields and answers so many phone calls and emails.

“As Rector of the Cathedral of the Immaculate Conception, I am blessed to have a dedicated and hard-working staff who helps handle all pastoral and administrative tasks. But because of time, I feel limited in what pastoral ministry I am able to give. I often wish I had more time to visit those who are ill and homebound, for instance. I will deeply miss the many members of the parish with whom I have journeyed in faith.

“After almost 18 years, I feel the Lord is telling me it is time for a change,” he continued. “So I accept responsibility as pastor of St. Jude Parish, Fort Wayne. This will provide its own new challenges and opportunities for priestly ministry. I hope my experience over the years will be a blessing and benefit to this strong and vibrant community of St. Jude Church. I pray that the Holy Spirit be my guide and counsel as I move into the future.”

Father Runyon said he is thankful to Bishop Rhoades for the confidence expressed in him, and that he looks forward to his new ministry as Judicial Vicar and Rector of the Cathedral of the Immaculate Conception. But leaving St. Jude will be tough, he admitted.

“The last five years has been a wonderful experience for me. St. Jude was kind enough to take me in as their pastor, even though I had never been a pastor before. I’ve gotten to know so many people there and I’ve been able to be a part of their lives. I’ll remember countless Masses, weddings, funerals, baptisms. I’ll remember watching young people as they grew up in the faith. I’ll remember sharing dinner and laughter with people who have become close friends,” he said.

“From my first days in the seminary, I have always desired to do nothing else but God’s will. So, I’m thankful that I had the opportunity to live and serve at such a wonderful parish. I’m also excited for the next chapter of my life to begin.

“As Judicial Vicar, my primary task is to manage and direct the tribunal for the diocese. It will be my job to ensure that marriage annulment cases are conducted in a professional, pastoral and sensitive manner. There is an excellent staff at the Tribunal and I have been working with them for three years in my role as a judge. I’m very pleased to have the opportunity to continue working with them.”

Father Runyon said it’s hard to describe his excitement for being the Rector of the cathedral.

I think it is safe to say that times of transition are complicated,” he noted. “I’m saddened to be leaving behind St. Jude Parish. I’m excited to continue my work in the Tribunal, and for an opportunity for ministry. The coexistence of these disparate emotions can be quite taxing; but, that’s the life of the priest. I ask the people of St. Jude and the cathedral to keep me in prayer during this time of change. May God continue to guide and bless us always.”

Father Gurtner, who began as a judge in the Tribunal in 2003, judging marriage nullity cases, said he is grateful to have served as Judicial Vicar for the diocese.

“I became Adjutant Judicial Vicar in 2009 with the responsibility of overseeing the South Bend Tribunal office, and in 2011 Bishop Rhoades appointed me Judicial Vicar with a move back to Fort Wayne to oversee the entirety of the operation of the Tribunal.

“Tribunal work is rewarding work, while at the same time it can be difficult work. Many people are helped by the work of the Tribunal which frees those who are bound by invalid marriages. At the same time, the work also implicitly upholds the dignity and indissolubility of marriage, which is by the Lord’s design.

“I am humbled by my appointment by Bishop Rhoades as Vicar General,” he said. “In this role, I will be directly assisting the bishop in the administration of the diocese. Also, this role encompasses support and assistance to all the priests of the diocese. As Moderator of the Curia, I will also serve to give support to and to coordinate the activity of the diocesan Curia — which is the diocesan staff assisting the bishop in his governance of the diocese. I very much look forward to this new work. At the same time, I will continue to serve as pastor of Our Lady of Good Hope. I would be grateful for many prayers as I begin this new assignment.”