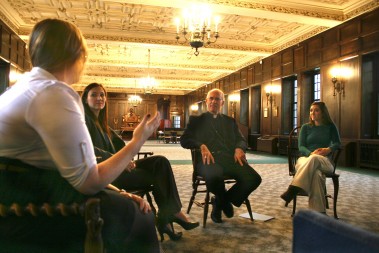 In his address to students, faculty and friends of Saint Mary’s, Bishop Rhoades talked about how relevant the philosophy of Aquinas is to the modern world, and how the two popes have applied that philosophy to modern culture.

“The philosophy that developed in the Christian tradition reached its apex in the teaching of St. Thomas Aquinas,” Bishop Rhoades said, explaining that Aquinas recognized the independence of faith and reason, but also their reciprocal relationship.

Bishop Rhoades said that Catholic teaching on faith and reason avoids the pitfalls of such errors as relativism, fideism, rationalism and fundamentalism. And he reflected on how both Benedict XVI and Blessed John Paul II “highlight the teaching of St. Thomas Aquinas that faith and reason share the same origin in God and thus are necessarily compatible, and that faith builds upon and perfects reason.”

Faith stimulates reason to be open to ever broader horizons, keeps alive in reason the search for foundations, and enriches reason’s work, he explained. And reason helps faith by demonstrating truths that are preambles of the faith; giving clearer explanation of the truth of the faith; and resisting those who speak against the faith.

Every person has a “natural and innate desire” to know the truth about life and its meanings, Bishop Rhoades said, but “We live in an age and a culture in which there has developed a certain skepticism about our ability to know the truth.”

Such skepticism is not new, and in fact has been present throughout human history and thrives on “the bombardment of a multitude of currents of ideological thought,” he said.

“There is no question that recent decades have seen an explosion of human knowledge in many areas, especially in the natural sciences and technology,” Bishop Rhoades said, noting that both John Paul II and Benedict XVI praised this progress.

“Yet, at the same time,” he continued, “both pontiffs have been critical of the concurrent neglect of the search for the higher truths and ultimate values, what we call ‘the neglect of the transcendent.’”

He cited the homily then-Cardinal Joseph Ratzinger preached to the conclave that went on to elect him Pope Benedict XVI. In that homily, Cardinal Ratzinger warned that the modern world was moving toward what he called a “dictatorship of relativism,” a culture “that does not recognize anything as certain and has as its highest goal one’s own ego and one’s own desires.”

He also cited the 1998 encyclical of John Paul II, “Fides et Ratio” (“Faith and Reason”), in which the pope wrote about a “crisis of meaning” in the contemporary culture and called for philosophy to recover its trust in the human capacity to know the truth. And the pope named the philosophy developed in the Christian tradition as the best way to avert current philosophical dangers.

Bishop Rhoades explained: “In the face of moral relativism today, St. Thomas’ principle that divine grace presupposes and perfects human nature is quite important. Reason is capable of discerning natural moral law. Such knowledge gives ground and foundation for the defense of universal human rights and the fundamental value of the dignity of the human person.”

However, if reason means thinking only about material things or realities that can be proven only by the scientific method, “We become closed to the great questions about life, about the human person, and about God,” Bishop Rhoades continued. Such “reductionism” causes many errors, he said, including materialism and a sense that technology is more important than persons.

Bishop Rhoades praised the curriculum at colleges like Saint Mary’s that gives students the opportunity to examine “the ultimate questions” by contemplating truth with both faith and reason. He noted that John Paul II’s 1990 apostolic constitution “Ex corde ecclesiae” (“From the Heart of the Church”) defined the promotion of dialogue between faith and reason as a specific part of a Catholic university’s task.

Bishop Rhoades took questions from the audience after his talk, and when a student mentioned that she was doing field work for Catholic Charities, he took the opportunity to reiterate what he had said in a press conference earlier in the day at Saint Joseph Regional Medical Center in Mishawaka.

In that press conference, Bishop Rhoades had expressed strong objection to the federal mandate that religiously affiliated nonprofit employers must provide coverage for immoral services such as sterilization and contraception. That mandate affects Catholic institutions that serve not only Catholics, but non-Catholics as well.

Bishop Rhoades received spontaneous applause from the audience for his comments on the federal mandate.