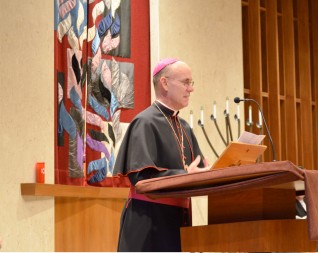 FORT WAYNE — Bishop Kevin C. Rhoades was present for the annual Holocaust Remembrance Day held April 28 at the Temple of Congregation Achduth Vesholom, along with Jewish clergy, officials of the Jewish Federation of Fort Wayne, which sponsored the event, local dignitaries, the Temple congregation and friends of the Jewish community.

Fran Adler, president of the federation, set the tone for the evening in her opening remarks. “We must remember,” she said.

It is important to remember the victims of the Holocaust, the survivors of the Holocaust and also their rescuers. Each year there are fewer people in all three groups so it is imperative that the Jewish community continue to recount the stories to prevent such an atrocity from ever happening again, Adler reminded her listeners.

Bishop Rhoades greeted those in attendance by saying, “It is an honor for me to be with you here this evening as we remember with great sorrow the Holocaust and as we honor with deep gratitude Danuta Renk-Mikulska. Shalom! Peace be to you. … I greet you with fraternal love.”

Mikulska, a Fort Wayne woman who was on hand for the event, was a Polish teenager when Germany invaded Poland in 1939. Her Catholic family helped hide Jews in an underground bunker on their property and it was her job to wash their clothes and scavenge food for them. She routinely risked her life in the effort and won recognition last year by being named Righteous Among Nations at a ceremony in Chicago.

“How fitting it is that we honor her this evening,” said Bishop Rhoades. “On behalf of everyone … I say to Danuta, ‘Thank you’ … for your courage and love. May God bless you and may God bless our friends, the Jewish community of Fort Wayne.”

Featured speaker for the commemorative event was Chris Nicola, a speleologist and cave specialist who has co-authored, “The Secret of Priest’s Grotto,” and a documentary film, “No Place on Earth.”

Nicola described the setting of his unbelievable story: “Amid the endless wheat fields stretching across the western Ukraine, there is a weedy hole in the ground. The only sign of cover for miles around is a low stand of hardwoods, withering in the heat a short distance away. With the exception of the sinkhole, there is nothing to indicate that one of the longest horizontal labyrinths in the world lies just underfoot.”

And so begins the story of Priest’s Grotto, a massive cave located in Ukraine on the land of a Catholic priest, which was the refuge of 28 Jews during the Nazi occupation of that area in 1943 and 1944. The Stermer, Dodyk and Kurz families lived through extraordinary means, “surviving off the land, and running supply lines at night like well-trained military guerrillas,” according to Nicola’s account.

Esther Stermer, matriarch of the Stermer clan, expressed their determination: “We are not going to the slaughterhouse,” Nicola related. The men of the families crept out of the cave at night and foraged for food and supplies, enabling them to survive horrible deprivation and miserable living conditions for more than a year, but allowing them to escape Nazi capture and exportation to the death camps.

In 1993, Nicola was one of the first Americans to explore the Ukraine’s caves after the fall of the Soviet Union. On that trip, guides showed him what appeared to be a campsite where signs of human habitation including old shoes, buttons and shards of pottery had been found. Local lore held that a group of Jews had fled to the cave during the Holocaust but no one in the area seemed to know what had actually happened or whether anyone had survived.

Over many months Nicola tried unsuccessfully to find a survivor from Priest’s Grotto, finally turning to the Internet for clues. He imbedded key words in the search code for his website on Ukranian caves, hoping someone would contact him. Finally, he heard from the son of one of the survivors who said his dad was living near Queens, N.Y., and other survivors were living in Florida and Canada.

Since then, Nicola has concentrated all his time and resources to confirm the story by finding and interviewing the last living survivors of the ordeal. For many, the experience was difficult to recount and his book, “The Secret of Priest’s Grotto,” is a testament to his efforts.

“I wanted to tell the story they couldn’t tell themselves,” he said.

The book has since been made into a movie and a television documentary. Nicola also heads up the Priest’s Grotto Heritage Project, a genocide awareness program seeking to build an exhibit commemorating those courageous survivors.

The Yom Hashoah program summed up the remembrance event. “On this day, special efforts are made to remember those who suffered, those who fought and those who died. … Although we are not physically there, we, too, are survivors.”