With abundant joy and thanksgiving, the United States Province of the Congregation of Holy Cross announced the ordination of three men to the priesthood. On Saturday, April 23, 2022, the ceremony took place at the Basilica of the Sacred Heart on the University of Notre Dame campus. Bishop Kevin C. Rhoades conferred the Sacrament of Holy Orders on Father Cameron Cortens, CSC, Father Drew Clary, CSC, and Father Gabriel Griggs, CSC.

“This is a joy-filled day for the Congregation of Holy Cross and the people of God. Cameron, Drew and Gabe are poised to help ‘wake up the world’ as Pope Francis invites us,” said Provincial Superior Father William M. Lies, CSC. “They are thoughtful and compassionate ministers of God’s friendship, something our Church and our world need more than ever. We in Holy Cross are so grateful to have them walking with us in our mission to make God known, loved and served.” 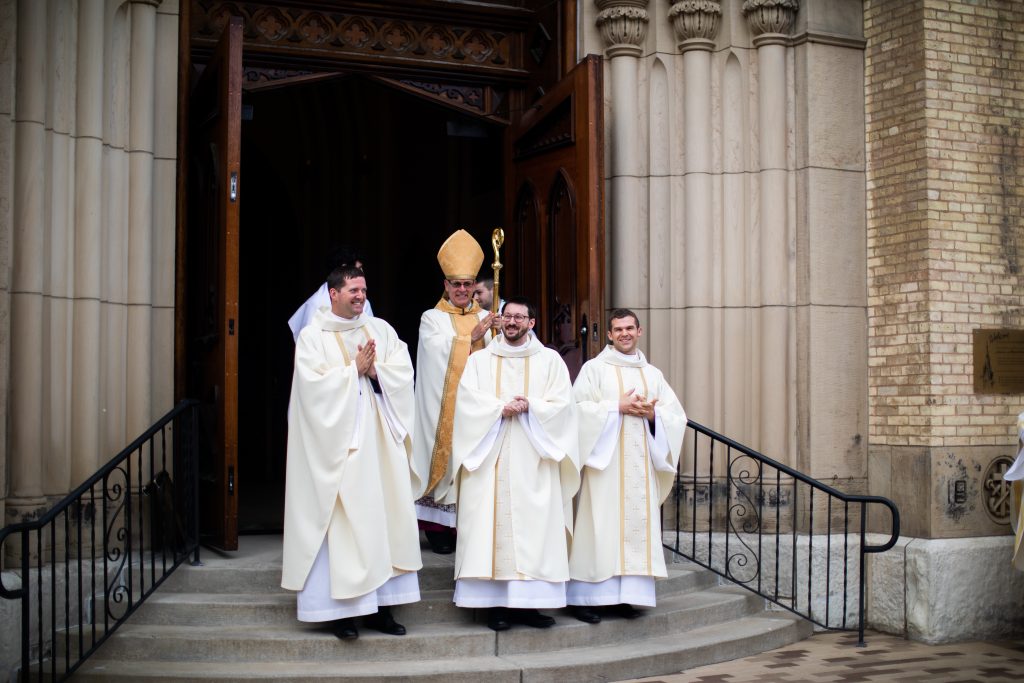 In his homily, Bishop Rhoades spoke about the priesthood and its connection to the Resurrection. He said, “Priests are called to be messengers of Christ’s Resurrection, of His victory over evil and death, and heralds of His divine love. This was the mission of the Apostles, as we heard in the first reading from the Acts of the Apostles.”

He told of how Jesus, after his resurrection, rebuked the Apostles “for their unbelief and hardness of heart,” after which He sent them forth to proclaim the good news.

“This is rather paradoxical – Jesus scolds them and then commissions them. They had to be humbled before going out to preach,” he said. “This is an important lesson for us who are ordained, that we recognize our own weakness, that we must be on a constant path of conversion ourselves, as we preach to and serve God’s people. God can make use of our weaknesses. What we need is to have faith in His fidelity and power. There is nothing like humility for attracting the grace of the Holy Spirit.”

Then he spoke of how the Apostles did as Jesus commanded them and how the priestly calling is an extension of that commission. He then instructed the three priest candidates to “abide in Christ through prayer, from which your ministry will draw its efficacy.”

“During this Easter Octave, we share in the joy of Mary, the Queen of Heaven, and we pray the Regina Coeli. We rejoice with her in the Easter victory of her Risen Son, Our Lord and High Priest. Drew, Cameron, and Gabe, may you welcome Mary anew as your Mother and as the Mother of your priesthood, as did the Apostle John at the foot of the cross! May she intercede for you, that you may be faithful images of her Son, the Good Shepherd!”

Father Cortens is the oldest of four children of Caroline and Andrew Cortens of Boise, Idaho. He graduated with a B.A. from the University of Notre Dame in 2013, where he also received his Master’s of Divinity in 2021. During his formation, he served at various ministries in the South Bend area and at St. Adalbert and Sacred Heart Parishes in the same city. He celebrated his first Mass on Sunday, April 24, at the Basilica of the Sacred Heart, Notre Dame.

Father Clary is the oldest of three children of Pamela and Richard Clary of Castroville, Texas. He graduated with a B.A. in Economics and Political Science from the University of Notre Dame in 2009. He earned a Master’s in Education through the Alliance for Catholic Education (ACE) in 2011. Father Clary entered formation with the Congregation of Holy Cross in 2015 and earned his Master’s of Divinity in 2021. In the summer of 2020, he began living and ministering at St. Adalbert and St. Casimir Parishes in South Bend, where he continued as a transitional deacon in preparation for priestly ordination.