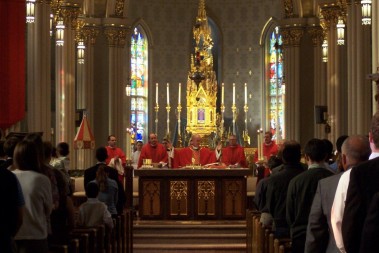 Bishop Kevin C. Rhoades celebrates the Red Mass at the Basilica of the Sacred Heart at the University of Notre Dame. Professors and students from the Notre Dame Law School and Political Science Department, as well as local members of the legal profession and government officials, attended the Sept. 26 Mass.

NOTRE DAME — The Red Mass at the University of Notre Dame Sept. 26 attracted professors and students from the Notre Dame Law School and Political Science Department, as well as local members of the legal profession and government officials. They all were offered many challenges to ponder by Bishop Kevin C. Rhoades of Fort Wayne-South Bend, who gave the homily and celebrated the Mass with several Holy Cross priests, all vested in red to depict the fire of the Holy Spirit.

“Lawyers and judges and civic officials and legal professionals need the guidance of the Holy Spirit in their noble profession in society today, that they may be faithful to their duties not only to a civil society, but to God,” Bishop Rhoades said.

In his homily, the bishop reminded the congregation that God’s commandments are not just a “legal code or set of juridic regulations.” Rather, “His law is a gift and a grace,” meant not to coerce our will, but “to free us from things that compromise our dignity and enslave us in sin.”

Divine law is directly related to civil law, the bishop said, and he cited the Catechism of the Catholic Church, which calls natural law “the indispensable moral foundation for building the human community” that “provides the necessary basis for the civil law.” Natural law, the catechism explains, “expresses the dignity of the person and determines the basis for our fundamental rights and duties.”

Bishop Rhoades said it was important to stress God’s law in light of “a kind of cultural relativism” prevalent in society today, with “the legal destruction of innocent human life,” the “efforts to redefine the natural institution of marriage” and the “threats to our first liberty” of religious freedom.

Quoting from a 2002 Doctrinal Note from the Congregation for the Doctrine of the Faith, Bishop Rhoades said that this cultural relativism “sanctions the decadence and disintegration of reason and the principles of the natural moral law.”

The result is that: “Citizens claim complete autonomy with regard to their moral choices, and lawmakers maintain that they are respecting this freedom of choice by enacting laws which ignore the principles of natural ethics and yield to ephemeral cultural and moral trends, as if every possible outlook on life were of equal value.”

This philosophy, he continued, damages democratic life, which must be based on certain ethical principles that are the foundation of society, including: the right to life and dignity of every human person from conception to natural death; the right to religious freedom; and the recognition that marriage is a “natural institution that is the original cell of social life and prior to the state.”

Bishop Rhoades stressed the duty of Catholics and good citizens to “uphold the ethical precepts that are rooted in human nature itself and belong to the natural moral law.” He acknowledged a “rightful autonomy” of the political/civil sphere from religion and the church, but said that there can be no autonomy from morality.

“We have the right and the duty to promote and defend moral truths concerning society, justice, freedom, respect for human life and the dignity of the human person,” he said.

Lay Catholics, including those in the legal professions, have a “special responsibility” in the public square to “promote and defend” those moral truths, the bishop said. However, he continued, some Catholics are tempted to lead “two parallel lives,” one as a Catholic and the other in one’s secular occupation.

“Some Catholic politicians, as an example, claim to be personally opposed to abortion, yet are pro-choice in their political lives. This stance must be rejected,” he continued, because “we have a duty to live a Christian life that is morally coherent.”

The Red Mass was co-sponsored by the Notre Dame Law School and Political Science Department, as well as the Diocese of Fort Wayne-South Bend. 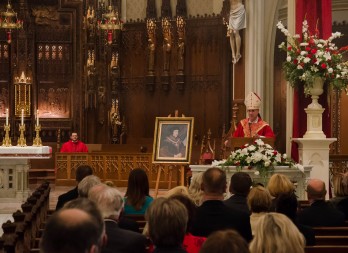 Bishop Kevin C. Rhoades gives his homily while Father Mark Gurtner, diocesan judicial vicar and pastor of Our Lady of Good Hope Parish in Fort Wayne looks on Oct. 3 at the Cathedral of the Immaculate Conception. Those in the legal profession joined Bishop Kevin C. Rhoades who celebrated the Fort Wayne Red Mass. They were invited to attend a dinner and talk in the Archbishop Noll Catholic Center after the Mass.

FORT WAYNE — Religious freedom is both vital and vulnerable and we must be vigilant to protect that freedom, noted Rick Garnett, who spoke to attorneys, judges and those in the legal field at a dinner following the Red Mass in Fort Wayne on Oct. 3.

Garnett is the associate dean for faculty research and professor of law and concurrent professor of political science at the University of Notre Dame. He writes about religious freedoms of speech and constitutional law and is regarded as a leading authority on questions and debates regarding the role of religious believers and beliefs in politics and society.

Garnett served as a consultant on the U.S. Catholic Conference of Bishop’s committee on religious liberty. In the U.S. bishops’ statement, “Our First Most Cherished Liberty,” members of the committee expressed their gratitude for the gift of liberty, which is ours as Americans,” noted Garnett. “But they also noted the need to remain on guard against potential threats to that liberty.”

One such threat is the HHS mandate, the federal rule that requires most religious employers to provide coverage for FDA-approved contraceptives and some abortion-causing drugs. The Diocese of Fort Wayne-South Bend and the University of Notre Dame, have filed lawsuits challenging the legality of this rule.

“Religious freedom is a human right. It’s grounded in human dignity and it is essential for human flourishing,” Garnett said. “Every person, because he or she is a person, has the right to religious liberty.”

Garnett said this right — this freedom — should be recognized, protected and promoted in law and in policy.

“Religious freedom is sometimes inconvenient’ for governments and for politicians, but it is crucially important to good government and stable politics,” Garnett said.

Garnett spoke of Pope Benedict XVI’s expression of his admiration for the American model of religious liberty and church-state liberty. Garnett said the pope, in his travels to America, seemed to praise America’s “positive concept of secularism,” in which government respects both the role of religious arguments and commitments in the public square and the important distinction between religious and political authorities. 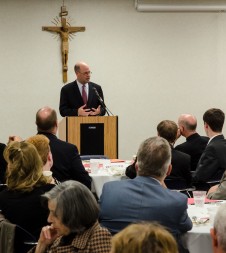 Rick Garnett, associate dean for faculty research and professor of law and concurrent professor of political science at the University of Notre Dame, was the speaker at the dinner that followed the Red Mass on Oct. 3 in Fort Wayne. Garnett writes and speaks about religious freedom issues and constitutional law.

Garnett spoke of how Thomas Jefferson regarded the religious-freedom guarantees enacted into law after the Revolution as a “fair” and “novel” experiment.

“Similarly, it was the confident hope of James Madison that America’s bold experiment in religious liberty … ‘promised a lustre to our country,’” Garnett said. “Madison believed that a specifically ‘American model’ of religious freedom was emerging, and that it would distinguish us, shape us and strengthen us.”

Madison and other leaders of the founding generation were keenly aware that they were attempting something new and great, something that would change — indeed, remake —the world. At the same time, they felt the weight of great responsibility.

Garnett noted that John Adams revealed as much when he wrote that “the people in America have now the best opportunity and the greatest trust in their hands, that Providence has ever committed to so small a number, since the transgression of the first pair; if they betray their trust, their guilt will merit … the indignation of heaven.”

“Today the American experiment in religious liberty is both vital and vulnerable,” Garnett said. “Our religious-freedom protections are robust, but incomplete. Our church-state arrangement is exemplary, yet confused. This much, though, seems clear: what was true at the founding remains true today, namely, that there are at work several different models, or ways of thinking about, the freedom of religion under and through law.

“The first approach — ‘freedom from religion’ — accepts religion as a social reality, but regards it primarily as a danger to the common good, and regards it as a practice that should be confined to the private, personal realm to the extent possible,” Garnett said. “On this view, it is ‘bad taste to bring religion into discussions of public policy.’”

He added, “The role of law and government (in this model) is to maintain the boundary between private religion and public life; it is certainly not to support, and only rarely to accommodate, religious practice and formation.”

The second approach — “freedom of religion” — Garnett said tends to emphasize toleration, neutrality and equal-treatment. Religion, on this view, is something that matters to many people, and so the law does not permit it to be singled out for special hostility or discrimination.

“It is recognized and accepted that religious believers and institutions are at work in society — sometimes doing good — and the stance of the law is even-handedness,” he said. “Because we are all entitled to express our views and to live in accord with our consciences, religious believers are so entitled, too. The law, it is thought, should be ‘religion-blind.’”

The third approach Garnett spoke about was the “freedom for religion.”

“Under this approach, the search for religious truth is not grudgingly accepted but is acknowledged as an important human activity,” Garnett said. “Religion is special and not just especially dangerous (in this view). The exercise of religion is seen as valuable and good and conducive to human flourishing, and worthy of accommodation. The idea under this model is not that the government should demand religious observances or establish religious orthodoxy — far from it; the idea, instead, that a political community committed to positive secularity can and should take note of the fact that people long for the transcendent and they are called to search for the truth, and for God.”

He said, in this model, the government takes special care to accommodate and facilitate religious exercise and respects the distinction between church and state. The government, he said, “avoids imposing unnecessary burdens on religion, it also looks for ways to lift such burdens when it can.”

The third approach, “freedom for religion,” represents the American experiment at its best, according to Garnett.