Much beyond reminiscing about the memories of college days gone by, however, the club’s approximately 1,200 members are a philanthropic force that provides hope across the region. In other words, they are a force for good.

Among the annual events organized by the club is the UND Celebration, a dinner honoring the recipient of its Person of the Year award. Signaling its foundational Catholic heritage, this year’s honoree was Bishop Kevin C. Rhoades.

“The bishop was an easy and well-deserving choice,” treasurer Tom Skiba said. “It’s truly an honor for our club, to be able to honor him.” Skiba and club member Lisa Fabian presented the bishop with a plaque proclaiming the honor.

The criteria for the Person of the Year are simple, according to Skiba: exemplary service to God, country and Notre Dame. The selection is made each year by prior recipients of the award. Among the more than 60 honorees since 1954 have been Edward Dahm, Father Tom O’Connor, Sam Talarico Sr., and Indiana state Senator Liz Brown.

This year’s UND Celebration took place Oct. 6 at Fort Wayne Country Club. After dinner, honoree Bishop Rhoades recalled his first visit to the University of Notre Dame in 2006 at the invitation of campus IT Manager Patricia McAdams.

A lifelong but long-distance Notre Dame football fan, the experiences of that weekend – the atmosphere of the campus and the stadium, saying Mass in the Basilica and praying at the Grotto — caused him to hope he would return soon, he recalled. Joyfully, he returned just a few years later as bishop of the diocese. 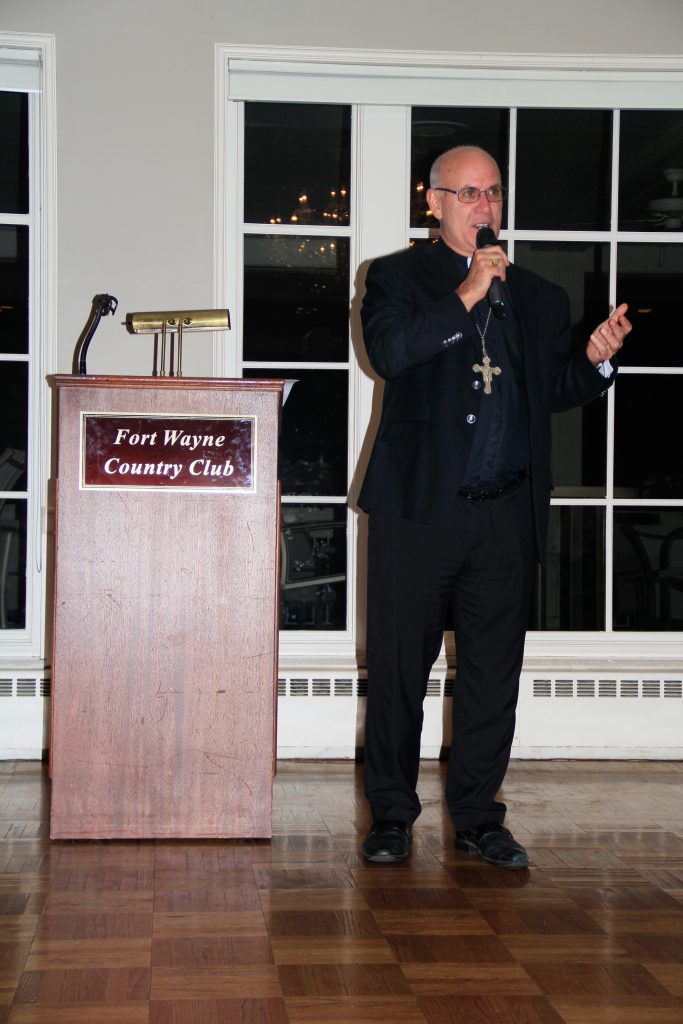 During the past 11 years, Bishop Rhoades has celebrated dozens of Masses in the student dormitories, brought many students into full communion with the Church, blessed around a dozen chapel altars, offered countless talks and lectures and attended conferences. Some of his favorite experiences, he told club members, are of the closeness he has come to enjoy with certain departments of the university, particularly the theology department – which he called “the best theology department in the United States, and one of the best in the world.”

“These are tremendous scholars who are deeply devoted to the Catholic Church … an intellectual force for good, and of scholarship for the Church,” the bishop said.

He additionally expressed appreciation for a close relationship with two other university organizations, the de Nicola Center for Ethics and Culture and the McGrath Institute for Church Life.

In addition to honoring Bishop Rhoades, this year’s UND Celebration also acknowledged another award — one received by the club itself. In April, members’ excellence in fulfilling the club’s mission of community service and faith was noted by the Notre Dame Alumni Association, which honored it with the university’s Force for Good Award. 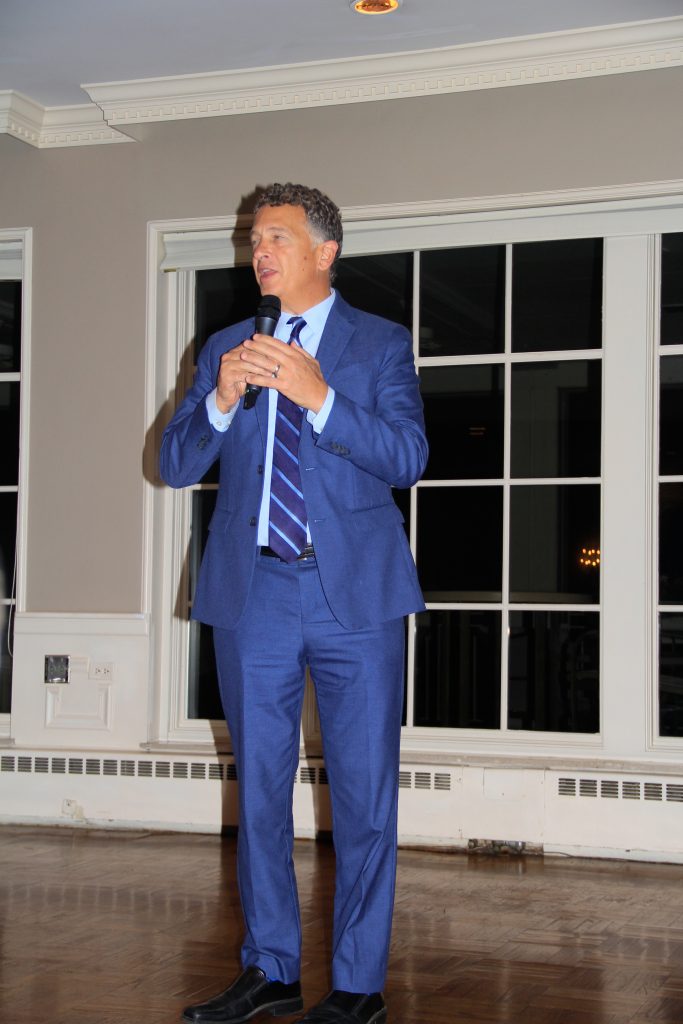 The evening’s keynote speaker, Lou Nanni, commended the UND Club’s charitable efforts and its roots in the Catholic faith. Nanni is vice president for university relations and a Notre Dame graduate.

The generous charitable accomplishments include several notable traditions. The scholarship fund built by the Notre Dame Club of Fort Wayne has surpassed $3 million; each year, more than $100,000 is distributed to between 25 and 30 current and incoming students. Club members mentor high school students interested in ND, as well as current ND students. They connect students with members of the community and with opportunities for further education and internships by, for example, sponsoring the cost for a teacher or two to attend an annual teaching conference and underwriting the participation of the same number of local middle school students at a yearly DNA camp offered by the university.

The club supports the charitable efforts of other local organizations as well, and offers a golf outing, Hesburgh lecture and other social events.

Keynote speaker for the UND Celebration was Lou Nanni, Notre Dame vice president for university relations and a Notre Dame graduate. Nanni lauded club members’ altruistic generosity and went a step beyond by encouraging them to strive not only to do good but to do good as a path to the ultimate goal of holiness.

The term for which the award given to the club was named, “Force for Good,” comes from the founding DNA of the university, Nanni said. Father Edward Sorin and several Holy Cross brothers traveled from Europe to the Diocese of Vincennes, later coming to South Bend during a ferocious snowstorm to found the school and showing “a tremendous force of will that would be undeterred.”

As one of the few institutions of higher learning that survived the Civil War, the subsequent fire that nearly destroyed the campus only served to increase Father Sorin’s faith in the institution’s patroness, Mary. She was placed on the high dome of the university’s main building and gilded in gold. It was at that moment, he recounted, that Father Sorin said the University of Notre Dame would become “one of the most powerful means for good in our society.” 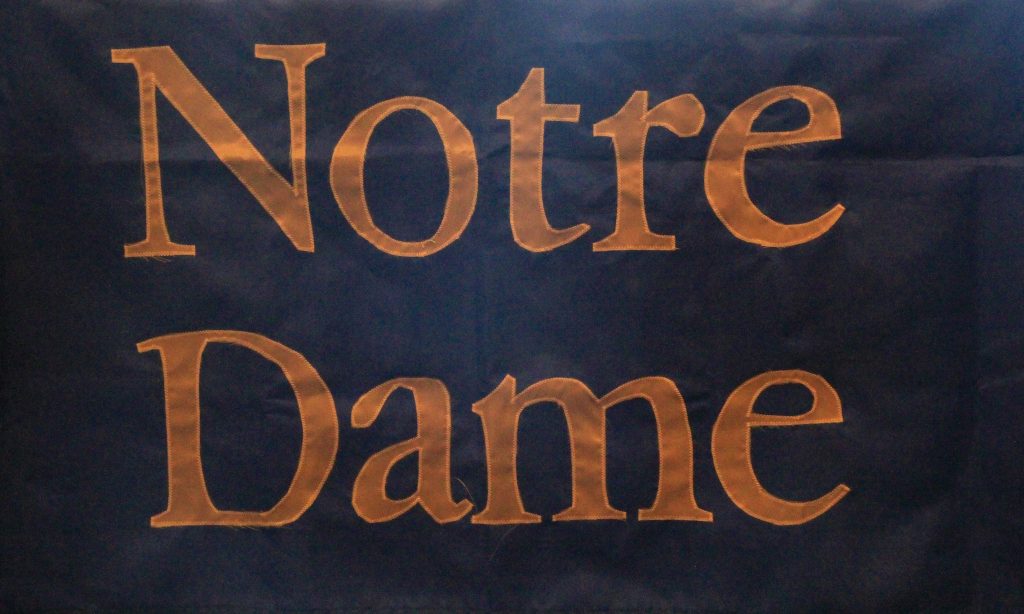 After two decades of considering the three-pronged vision of the university – offer unsurpassed undergraduate academics, and premier in research and graduate education, all while assuring that the school’s Catholic character informs everything — Nanni said his daily motivation is best captured by an anecdote involving a conversation involving university trustee Jim Dunn. A stranger shared with Dunn that early in Father Theodore Hesburgh’s tenure as president of Notre Dame, a tragedy had occurred on campus and a male student was killed. For the next 40 years, on the anniversary of the student’s death, Father Hesburgh handwrote a letter to the student’s family. The letters were perceived to have extended the life of the student’s mother by five years.

“Scandal, by definition, is public,” Nanni concluded. “But holiness is often hidden or seeks to hide itself. At Notre Dame, we’re not just called to greatness, we’re called to holiness. We’re called not just to do the big things, but we’re called to do the little things – the handwritten letters that you don’t think will see the light of day. But when they do, they make a difference. And that’s worth living for,” he said.

“That’s worth searching for, ways we can propagate the faith. That’s worth trying to be more understanding, more kind, and to take those steps. If we do that and following the examples of Father Hesburgh and so many others, we can continue to be that force for good in the world that Father Sorin envisioned.”

Membership in the Notre Dame Club of Fort Wayne is open to all, although a schedule of dues applies. Currently, about half of the members are Notre Dame alumni. For more information about how to join, visit the club on Facebook or contact the University of Notre Dame Alumni Office.