Describing the Byzantine Catholic community at the University of Notre Dame as “such a blessing to our diocese,” Bishop Kevin C. Rhoades gave the homily at the Divine Liturgy of St. John Chrysostom Sunday, Feb. 17, with the diverse and vibrant community. Father Khaled Anatolios and Father Michael Magree, SJ, concelebrated on the “Prodigal Son” Sunday of the Triodion, the liturgical period leading up to the Great Lent in the Byzantine Church.

“It was initially a derogatory term applied to those who followed the Council of Chalcedon, which was championed by the Emperor at the time. We see the Melkite Church as a kind of bridge between the Eastern and Western churches.” Melkites trace their history to the first century A.D., to the early Christians of Antioch, in the Middle East. 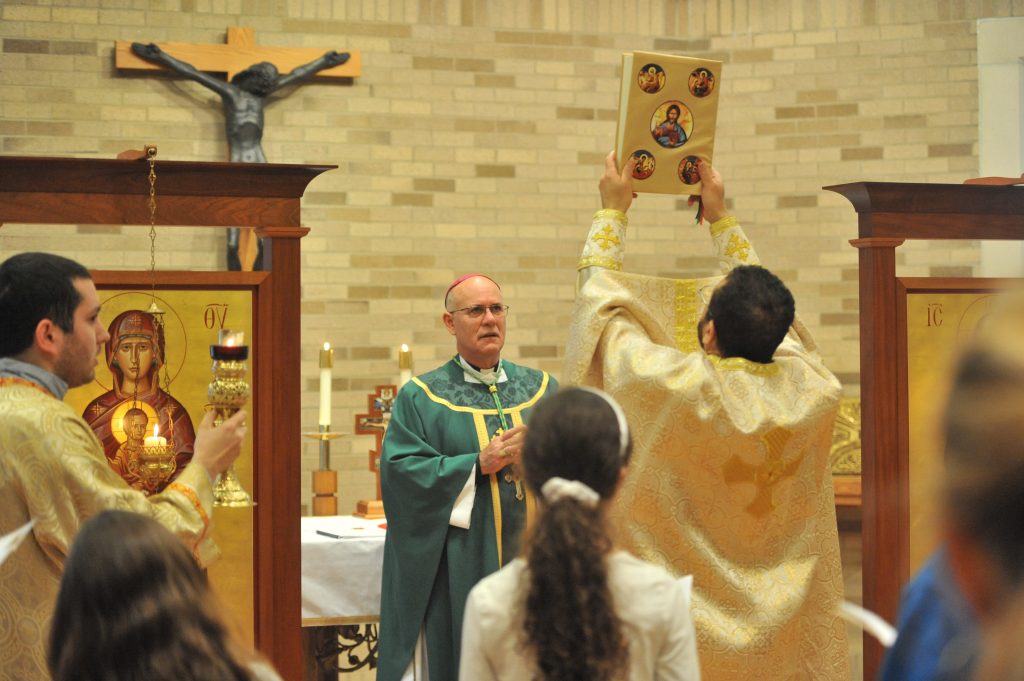 Father Khaled Anatolios raises the Book of the Gospel before Bishop Kevin C. Rhoades during the Divine Liturgy.

The two rites or types of liturgies of the Roman Catholics, who spoke Latin, and the Byzantine Catholics, who spoke Greek, both belong to the same family. Celebrating together in friendship, Bishop Rhoades and Father Anatolios visually demonstrated that spiritual reality. For the faithful who were of Latin and Greek rite baptisms, it was a reminder of the greater global Church and community beyond the Diocese of Fort Wayne-South Bend.

They were also founded by the apostles and practice eight different rites among them; each rite with a unique language and cultural customs, depending on the area it developed. Father Anatolios explained: “A rite is a style or way of celebrating liturgy.” Any practicing Roman Catholic may attend and receive the sacraments in them, fulfilling the Sunday obligation. St.  John Paul II taught in Orientale Lumen that the “ancient tradition of the Eastern Churches is an integral part of the heritage of Christ’s Church.”

“After Jesus’ resurrection, the early Church had a diversity of local usages with common patterns,” Father Anatolios summarized. “Around the fourth century, they became more uniform, centralized around major urban centers, such as Rome. The different rites originate from the consolidation of liturgical usages around major centers in the early Church. The Latin rite comes from Rome; the Byzantine rite from Antioch and Constantinople.” The Eastern capitals shared a common language, Greek, and similar mode of discourse which formed the basis for the subsequent development of the Eastern Christian tradition in later years. 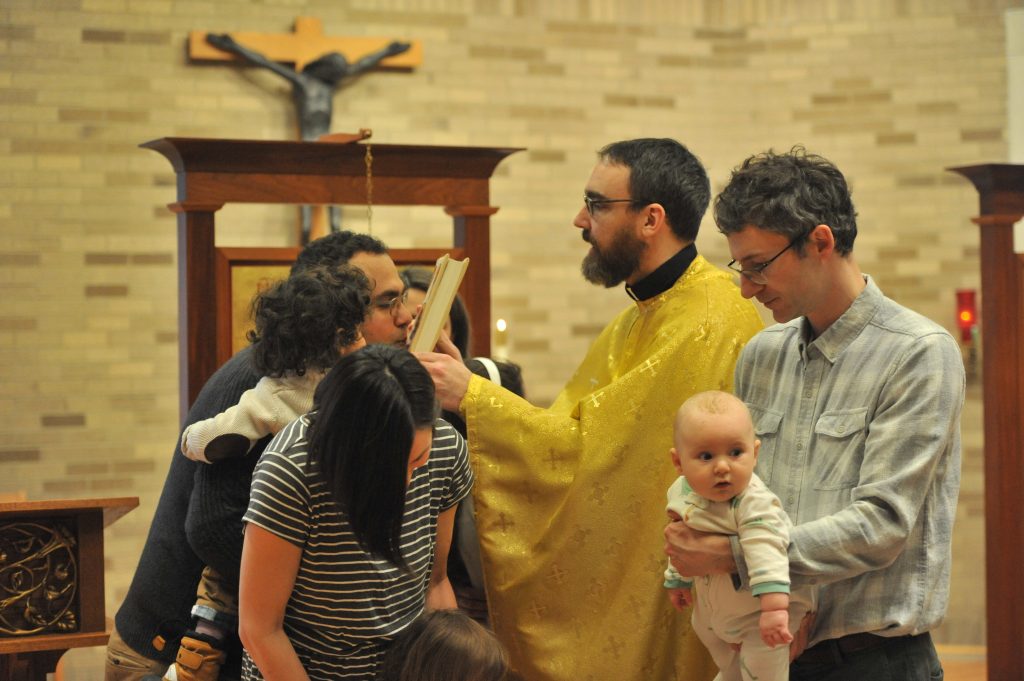 Families gather to kiss the Book of the Gospel, held by Father Michael Magree, SJ, during the Divine Liturgy of St. John Chrysostom celebrated by the Byzantine Catholic community of the University of Notre Dame Sunday, Feb 17. — Photos by Joe Raymond

The Byzantine Liturgy is an ethnic home for Father Anatolios, especially as he first celebrated it as a child in his native Arabic. Born in India, he grew up in Egypt and Canada, before studying and working in the United States. Father Anatolios is now a married priest of the Melkite Greek Catholic Church as well as a theologian and professor focusing on early Christianity, especially Patristics.

Many of the faithful of the worshipping community appreciate this, as they too grew up with Arabic in the Middle East. Praying together in the chapel is one of the few times a week they are able to publicly share their native tongue.

Tami Elia and Yvonne Maaluf have found this to be true. Originally from Lebanon, these two friends first met in South Bend. The elderly women came with family to the United States to escape violence in their native land. Elia first in 1973 worked at the University of Notre Dame as a tailor and Maaluf in 1994, worked in her home as a mother raising three boys and a girl. Now as a proud grandmother of three, she is grateful for this faith community, praying the Divine Liturgy and including many Arabic words. “We learn when we were babies, our language, our Mass. This is in my blood, my bones,” Maaluf said emphasizing the spoken reality with her hands.

The most noticeable sense, perhaps to the Roman or Latin ear, is the unique sound during the Divine Liturgy. Led by Nicholas Russo, the choir of melodic voices chanted a musical system divided into eight modes, similar to the old system of Gregorian Chant. Russo, a dean in the College of Arts and Letters at the University of Notre Dame, said the harmonious choir follows music already chosen and proscribed thousands of years ago. It is chanted in “octoechos, some which have no correlation in Western music, some which sound much like a major key.” Russo is the equivalent of a lector or cantor in the Latin Rite.

Raised in the Byzantine tradition from birth, Russo’s father, now retired, is a priest of the Melkite Greek Catholic Church. “Together with the choir, we facilitate the communal chanting of the Divine Liturgy,” he explained. Russo’s service is instrumental to the worship, as almost the entire liturgy is chanted.

“Chanting generally is the norm,” Russo said. “Through melodic adornment, the words are rendered suitable for proclamation in sacred space and are transformed into a ‘sacrifice of praise.’ Nothing is ever simply spoken in the Divine Liturgy.”

In his homily, Bishop Rhoades taught and unpacked the Gospel reading of the Parable of Prodigal Son, in light of these days of the Triodion. “Before Lent, it is good to meditate on this parable and compare ourselves to the two sons and also especially to contemplate the Heart of the Father, to throw ourselves into His arms and be regenerated by His merciful love,” he said. Connecting Theotokos, or the Mother of God, to her Son, he continued: “May the Blessed Virgin Mary, the Mother of Mercy, help us to do so!”

He offered that “the sacred liturgy today invites us to contemplate the necessity of repentance in our relationship with our heavenly Father.” Bishop Rhoades explained sin as “an act of rebellion” from the parable. “Sin is also exile, distancing ourselves from God. Think about it — the son was free when he was in his father’s house. When he went far away and squandered his inheritance, he became a slave … That is what sin does — it ultimately leads to misery.”

“When we move away from our Father, distance ourselves from God, we also live away from the truth of our existence. We become alienated not only from God but from ourselves. But we can always return home. Isn’t that the main point of the parable? Conversion! We can journey home because we have a Father who waits for us, a merciful Father who is full of love and compassion.”

Looking closer at the three characters in the parable, the bishop offered insights into the spiritual life, through their lens. “The older son had been obedient, but he had a hard heart. He was free but he carried his freedom as if it were slavery. He had not matured to real sonship. Interestingly, the younger brother did. Though he was a rebel and squandered his inheritance, he turned back to his father. He repented and was purified. He learned what it means to be free and what it means to be a son.”