Bishop Kevin C. Rhoades visited the annual Rekindle the Fire Men’s Conference on Saturday afternoon for a Q&A session and to celebrate Mass.

During the Q&A session, Redeemer Radio host Kyle Heimann asked the bishop several questions that conference participants had written on note cards earlier that day. One of those centered around whether or not the Catholic Church would say that it is morally acceptable to become involved in a war. 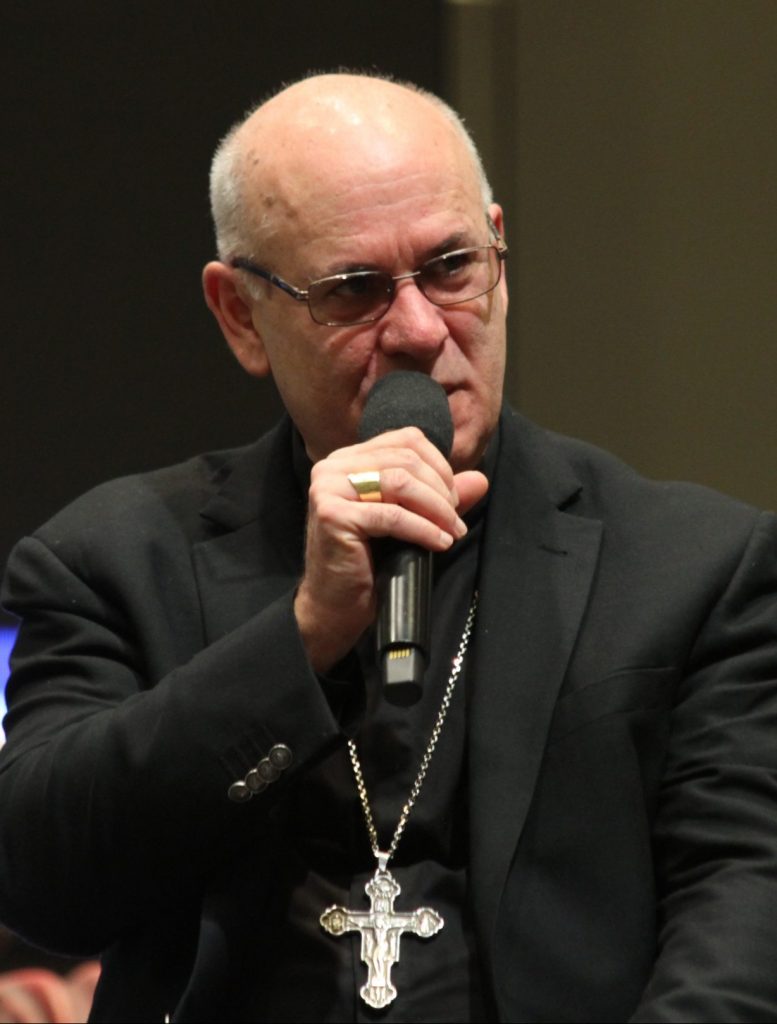 “War should only be a last resort,” the bishop explained, “the Church is very clear on that. We have a tradition that’s called the just war theory – the just war tradition. Actually, it has roots in ancient Greek and Roman thought and it’s been developed in the Church, especially by lay theologians like St. Augustine and St. Thomas Aquinas.”

Bishop Rhoades continued to explain the criteria by which the Church determines the morality of war involvement, including the chance of success in the conflict. He also mentioned that the question was particularly timely with the Russian invasion of Ukraine.

He added that unjust methods within war include the use of biological and chemical weapons, as well as indiscriminate killing, and that there has to be grave reason to go to war, according to the Church.

Relating the question to the current crisis in Eastern Europe, the bishop talked about where Church tradition fits with regard to Ukraine taking up arms against the Russian invasion. “Obviously, our assistance to Ukraine right now with providing arms, et cetera, I think is just,” he explained. “They’re being attacked by an aggressor. And it’s terrible – it’s a crime what President Putin is doing – violating the sovereignty of another nation.

“Innocent people are being killed today in Ukraine. That’s an unjust aggressor. Ukraine does have a right to defend itself – to take up arms against this Russian invasion. So I would say, that’s just on the part of the Ukranians. And it is just for us to assist them. All the diplomatic means were attempted, and Putin still attacked. It was unjust. The injustice is on the part of Russia.”

After the Q&A session, the men convened to celebrate Mass with Bishop Rhoades.

In his homily, the bishop talked about hypocrisy, as how sins and vices can prevent people from growing in the Christian life.

“In today’s Gospel, Jesus continues to challenge his disciples, teaching us again, for example, not to judge another’s faults without first addressing our own worse faults. We’re all familiar with the famous words of Jesus in today’s Gospel: ‘Why do you notice the splinter in your brother’s eyes, but do not perceive the wooden beam in your own … You hypocrite! Remove the wooden beam from your eye first – then you will see clearly to remove the splinter in your brother’s eye.’”

Bishop Rhoades continued to say that, during the upcoming season of Lent, it is a time to “recognize the wooden beam in our eye and to remove it.

“I invite you to think about that wooden beam. What sins, vices and faults are blinding us and preventing our growth in the Christian life? What do we need to remove or to ask the Lord to help us remove so that we can become better men, better priests, better husbands, better fathers, better neighbors?”

The bishop added that everyone can admit to some hypocrisy in their lives.

“What our Lord says in today’s Gospel is so true. If we’re honest with ourselves, I think we all have to admit at least some hypocrisy in our lives. We often judge others and their faults and give ourselves a pass. Jesus is teaching us to judge ourselves or we will be like blind guides of the blind. If we’re blind to our own sins, how can we help others deal with their sins?”

He also mentioned that in Jesus’ time, it was the Pharisees that he called “guides of the blind” in Matthew’s Gospel.

“Let us all make sure to make some resolution for Lent in this area of prayer to help us answer our Lord’s summons to live as He lived. That’s what the Sermon on the Plain describes – the way Jesus lived, acted and spoke. It’s the way He wants us, His disciples, to live. He wants us to be good trees that produce good fruits in his vineyard.”