Usually there are few surprises when Catholics attend Mass. But the parishioners of Blessed Sacrament Church in Albion who attended the 4 p.m. Mass on Saturday, Aug. 26, were pleasantly surprised at the conclusion of the liturgy.

Bishop Kevin C. Rhoades celebrated the Mass and greeted the congregation with many people seated in the adjoining dining hall at the rear of the worship space. He remarked that he could see the overflow crowd and their need for a new church. He added that he might talk about the issue further after Communion. 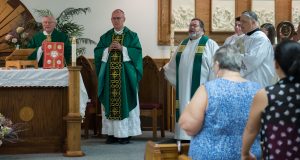 In his homily, Bishop Rhoades referred to the Gospel (Mt. 16:13-20) saying, “Jesus asked the apostles a very interesting question: ‘Who do people say that the Son of Man is?’… People had all kinds of different opinions about who Jesus was. Maybe it’s the same today when you think about it,” he continued. “If people were asked this question, they might give different answers.  “Then Jesus asks the apostles another question, one much more personal. He says ‘Who do you say that I am?’ Simon Peter, as he does so often in the Gospels, appears as the spokesman for the group and makes an astounding profession of faith: ‘You are the Messiah, the Son of the living God,’” Bishop Rhoades emphasized. “It is good to listen to Jesus asking you and me this question: ‘Who do you say that I am?’ How do we respond? To respond like Peter … is not merely something we say with our lips, or assent to only with our intellects. It is something deeply personal, in our hearts, and changes the way we live,” he said. 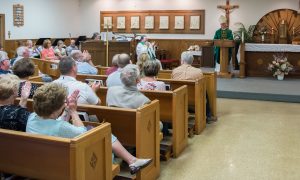 Ironically, Matthew’s Gospel speaks of building Christ’s church. Bishop Rhoades continued, “Today’s Gospel does not end with Simon Peter’s profession of faith. Very solemnly, Jesus then says to Simon: ‘And so I say to you, you are Peter, and upon this rock I will build my church, and the gates of the netherworld shall not prevail against it.’”

Concluding his homily, Bishop Rhoades said, “When we make the profession of faith made by St. Peter that Jesus is the Christ, the Son of the living God, we don’t do so just as individuals. We do so as members of Christ’s Body, the church. … We thank God for our Catholic faith and for the church. May the Lord bless this parish named in honor of the sacrament that makes us one Body in Christ, the Holy Eucharist, the Blessed Sacrament,” he emphasized.

“It is with great joy on behalf of our parish that we welcome you to our church.” He thanked Bishop Rhoades for his periodic visit, which was planned the previous February or March. “This is an important time for our parish,” he continued, as he reviewed its brief history. “We built our first church in 1875. It was called Sacred Heart,” he said, “consisting of about 12 families.” That church survived until the late teens and eventually was dismantled and the wood used to build homes. “To make a long story short,” he continued, “a new, small stone church was built on the Albion courthouse square in 1941.” Many outdoor Masses were celebrated during the summer months but the county wanted the property for parking. “We realized this current property included more than six acres with plenty of space to build a new church, so we moved into this building.”

Father Steele, who concelebrated the Mass, said plans for a new church in Albion have been drawn up several times for nearly 25 years but the worship facility, literally, never got off the ground due to insufficient funds. The most recent plan was to break ground this past March but the money just was not there.

After recognizing two long-time families — the Moorhouses and the Mawhorters — whose respective area histories go back more than 150 years, Father Steele reviewed efforts to raise the $700,000 for a new church. “As of last spring we had raised $800,000, but the cost keeps going up,” he accentuated. This past summer, the approximately 112 parish families raised another $120,000 and “we really prayed hard that everything would come together. But as of last week, we are $130,000 short of our goal,” he lamented.

Bishop Rhoades then approached the ambo and said, “I can’t believe that a parish your size has raised that much money. This past week,” he continued, “several anonymous, major donors came forward, including one last night, and you’ve made your goal!” 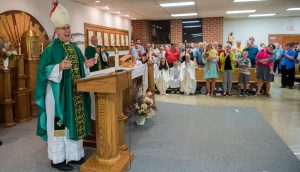 After the cheers and applause died down, Bishop Rhoades said, “I hereby grant permission for you to build a new church. Not only that, I want to invite you at the end of Mass to follow me. I’m going to break ground and bless the land so that, hopefully, construction can begin next month. And I hope to be back next Easter season or perhaps on the feast of Corpus Christi to dedicate your new church.” Again, after the applause subsided, Bishop Rhoades added, “I’ve done a lot of groundbreakings but never a ‘surprise’ groundbreaking!” 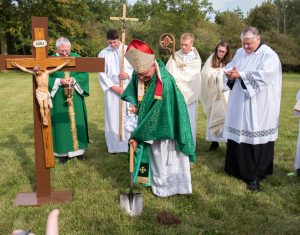 During the groundbreaking ceremony with Father Steele, Today’s Catholic asked Parishioner Shelley Mawhorter if Bishop Rhoades’ announcement was a surprise. “Oh, yes,” she responded. “As of last week, we still needed the money.”