Bishop Kettler, who has headed the Diocese of St. Cloud since 2013, turned 78 on Nov. 26. Canon law requires bishops to submit their resignation to the pope at age 75.

Bishop-designate Neary, 59, has been Holy Redeemer’s pastor since 2018. He was District Supervisor of East Africa for his religious order, Congregation of Holy Cross, from 2011 to 2018 and before that was Director of the McCauley Formation House in Nairobi for a year.

The changes were announced on Dec. 15 in Washington, D.C. by Archbishop Christophe Pierre, the Vatican Nuncio to the United States.

Bishop-designate Neary’s episcopal ordination and installation as Bishop of St. Cloud has been set for Feb. 14. Vespers will take place on Feb. 13. 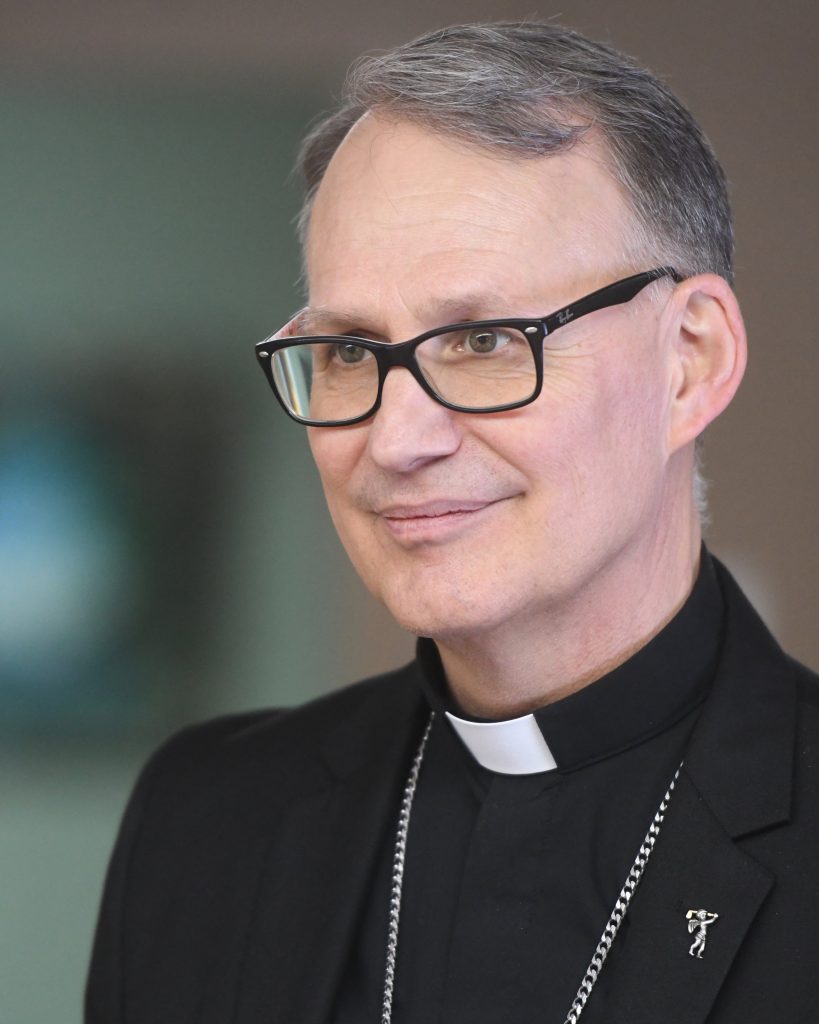 Bishop-designate Patrick M. Neary is seen during a news conference Dec. 15, 2022, at the Pastoral Center of the Diocese of St. Cloud, Minn. Pope Francis appointed him to succeed Bishop Donald J. Kettler of St. Cloud, whose resignation the pope accepted the same day. A Holy Cross priest, the newly named bishop has been pastor of Holy Redeemer Catholic Church in Portland, Ore., since 2018. (CNS photo/Dianne Towalski, The Central Minnesota Catholic)

“No one is more surprised than I am to be asked to serve as Bishop of the Diocese of St. Cloud,” Bishop-designate Neary said in a statement. “Yet I have always trusted that Christ has guided me through every stage of my life as a priest. I so look forward to meeting everyone who is a part of this diocese, my new family.”

“I especially ask God to help me build on the legacy of Bishop Kettler and all the clergy and personnel who serve in the diocese with zeal and devotion,” he added. “Please pray for me that I can be a faithful and loving servant to all of you.”

Bishop Kettler said his newly named successor “is tremendously qualified with his experiences as a pastor, seminary rector, formation director, and missioner. I am very appreciative that he said yes to the call to serve the people of this diocese as their bishop, and I welcome him warmly to central Minnesota.”

The retiring bishop, a native of Minneapolis, had headed the Diocese of Fairbanks, Alaska, for 11 years when Pope Francis named him to succeed Bishop John F. Kinney of St. Cloud, who retired at age 76.

Bishop-designate Neary was born on March 6, 1963, in La Porte, Indiana, to Jacob and Marybelle Neary. He is the first-born of six children and has five sisters. His family belongs to St. Joseph Parish in La Porte, where the Neary siblings attended St. Joseph’s Grade School.

He graduated from La Porte High School in 1981 and entered the undergraduate seminary with the Congregation of Holy Cross at the University of Notre Dame. While at Notre Dame, he spent a semester at Anahuac University in Mexico City, where he learned Spanish.

He graduated from the University of Notre Dame in 1985 with a Bachelor’s Degree in History.

After completing his novitiate year in Cascade, Colorado, Bishop-designate Neary began his studies for a Master of Divinity in 1986 at the Jesuit School of Theology in Berkeley, California. In 1988, he spent the entire year at the congregation’s seminary in Santiago, Chile, where he practiced his Spanish.

He professed perpetual vows with Congregation of Holy Cross on Sept. 1, 1990, and was ordained a priest at the Basilica of the Sacred Heart at Notre Dame on April 1, 1991, by the late Auxiliary Bishop Paul E. Waldschmidt of Portland, himself a Holy Cross priest.

In 1994, Bishop-designate Neary was assigned to the University of Notre Dame and worked in the Office of Campus Ministry, primarily ministering to Latino students at Notre Dame and serving as ROTC Chaplain.

He served on the Provincial Council of his religious congregation’s U.S. Province of Priests and Brothers from 2003 to 2010, and served on the Vocation and Formation Commission of the General Administration for the Congregation of Holy Cross in Rome from 2002 to 2010.

When he finished his term as Rector, Bishop-designate Neary was asked to run the congregation’s seminary in Nairobi, Kenya, for two years to train a new team of formation personnel and build up the seminary program.

Since July of 2018, Bishop-designate Neary has served as pastor of Holy Redeemer Parish in Portland.

The Diocese of St. Cloud encompasses 16 counties in central Minnesota. It includes 131 parishes grouped into 29 area Catholic communities and a Catholic population of approximately 125,000 people.

Archbishop Bernard A. Hebda of St. Paul and Minneapolis said in a statement that he looked forward to collaborating with Bishop-designate Neary as “he joins the bishops of our state in providing pastoral leadership after the heart of Jesus.”

The archbishop cited the newly named bishop’s experience in consecrated life, seminary formation, missionary outreach, and parish leadership in making him “a fitting successor to Bishop Donald Kettler, who will long be remembered as a humble and generous shepherd.”

Holy Cross Father John I. Jenkins, president of Notre Dame, congratulated Bishop-designate Neary on his appointment to head the St. Cloud Diocese and assured him of his prayers.

“Soon after being assigned in 2010 to the Holy Cross formation house in Nairobi, Kenya, Father Neary wrote that, though he arrived with little understanding of the culture or language of the country, he felt called to ‘go anywhere that I am needed,’” Father Jenkins said in a statement.

“Now,” he added, “the Holy Father has determined that Father Neary is needed in St. Cloud,” where he “will serve well the people of God.”