Archbishop Thompson, who has been Evansville’s bishop since 2011, succeeds Cardinal Joseph W. Tobin, who was named to head the Archdiocese of Newark, N.J., last November.

The appointment was announced June 13 in Washington by Archbishop Christophe Pierre, apostolic nuncio to the United States.

That same day, Archbishop Thompson spoke to priests, deacons, religious and laity from across central and southern Indiana about his appointment during a news conference at the Archbishop Edward T. O’Meara Catholic Center in Indianapolis on the eve of the start of the spring general assembly of the U.S. Conference of Catholic Bishops in Indianapolis.

“I pledge to dedicate myself to you without hesitation or reservation,” said Archbishop Thompson, 56. “Together, we will build on the incredible foundation that already exists, striving to discern the signs of the times and make every effort to participate in framing the essential questions of faith and life, in order to promote a shared vision rooted in word, sacrament and service that enables us to respond rather than react to opportunities and challenges.” 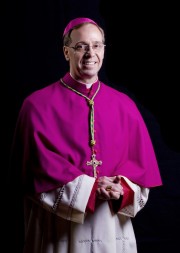 Pope Francis has named Bishop Charles C. Thompson of Evansville to head the Archdiocese of Indianapolis.

He will be installed July 28 during a Mass at Sts. Peter and Paul Cathedral in Indianapolis.

Prior to that, he will ordain 21 men as permanent deacons for the archdiocese June 24 at the cathedral. The day after his installation, he will travel to Rome to participate in Pope Francis’ blessing of palliums for metropolitan archbishops appointed during the past year. The blessing takes place June 29, the feast of Sts. Peter and Paul.

A pallium is a woolen band worn over the shoulders that symbolizes an archbishop’s pastoral care for the people of his archdiocese and his sharing with the pope of the shepherding of the universal church. Archbishop Thompson’s pallium will be placed on him during his July 28 installation Mass.

The new archbishop’s remarks during the news conference were at times marked by self-deprecating humor.

When asked how he would describe himself, the prelate, who is about 5 feet 7 inches tall, answered: “Short” — drawing a round of laughter.

He followed this up, however, by expressing his love of his faith nurtured in his native Kentucky and his family, which includes 90 first cousins and more than 200 second cousins.

In describing the phone call he received June 3 from Archbishop Pierre, during which he learned of his appointment, Archbishop Thompson said, “I kept saying, ‘Wow. OK. Wow. Wow.’ He just started giggling. He was very patient with my nervousness.”

Earlier that day, Archbishop Thompson had ordained two men as priests for the Evansville diocese.

“My homily that day was on missionary discipleship,” he recalled. “I talked to them about how the Lord sends, and we have to be prepared to go where the Lord sends us and not to become complacent. I got off the phone and I thought, ‘Who was I preaching to this morning?’”

The modest way he described his homily and his later reaction to it provoked much laughter among his listeners.

Archbishop Thompson expressed a humble modesty in a different way in soberly reflecting on changing from leading the Evansville diocese to the archdiocese.

His humility also was seen in his recognition of the necessity to collaborate with others in leading the Catholic Church in central and southern Indiana.

“Anywhere I go, what always sustains me is obviously prayer,” Archbishop Thompson said. “I rely on the people around me for great counsel and advice, working together, collaborating. I don’t do this by myself. We do this together. Ultimately, it’s Christ’s church, not mine.”

A native of Louisville, Ky., the archbishop was vicar general of the Louisville archdiocese from 2008 until he was named bishop of Evansville.

In the Indianapolis archdiocese, two people with whom Archbishop Thompson will work closely are chancellor Annette “Mickey” Lentz and Msgr. William F. Stumpf, who will continue to serve as archdiocesan administrator until the July 28 installation Mass.

“I was so thrilled when I knew that he was going to be our new archbishop,” Msgr. Stumpf told The Criterion, the archdiocesan newspaper. “He brings so many wonderful qualities. He’s an extremely humble man, very personable. He’s a very prayerful man, which is absolutely essential in that type of job. He brings a wide variety of pastoral experiences. I know we’re in good hands.”

During the news conference, Archbishop Thompson said that Msgr. Stumpf will serve as his vicar general, a position he held under Cardinal Tobin, who was archbishop of Indianapolis from 2012 to 2016.

Lentz appreciated Archbishop Thompson’s continuity with previous leaders of the archdiocese going back to retired Indianapolis Archbishop Daniel M. Buechlein, who was president-rector of Saint Meinrad Seminary and School of Theology in St. Meinrad when the new archbishop received his priestly formation there for the Archdiocese of Louisville.

“I’m hopeful,” Lentz said. “For me, it’s a continuation of what we had through Archbishop Emeritus Daniel and Cardinal Tobin. It’s an exciting time. He’s a good man.”

Although many spoke his praise after the news conference, during it Archbishop Thompson placed the focus on Christ when reflecting on his episcopal motto, “Christ the Cornerstone.”

“I try to keep before myself that we have to be Christ-centered,” he said, “not self-centered, ideology-centered, not to be driven by my agenda, but to be driven by God’s will, the mission of Jesus Christ and the grace of the Holy Spirit.” 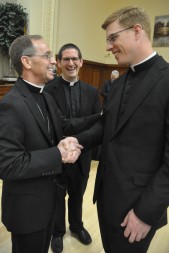 Bishop Charles C. Thompson of Evansville, Ind., is welcomed by Deacon Jeffrey Dufresne following a June 13 news conference announcing Pope Francis had named Bishop Thompson the new archbishop of Indianapolis. Looking on is Father Eric Augenstein, archdiocesan director of vocations. Deacon Dufresne is scheduled to be ordained a priest for the archdiocese in 2018. — CNS photo/Sean Gallagher, The Criterion

INDIANAPOLIS (CNS) —The crowd may have numbered around 300, but the reaction seemed unanimous: New Archbishop Charles C. Thompson will be a “perfect fit” as the new spiritual leader of the Archdiocese of Indianapolis.

From laypeople, priests and staff members of the Diocese of Evansville to the Archdiocese of Indianapolis, reaction to the appointment of the new archbishop was positive and hopeful.

According to comments in an earlier interview with The Criterion, the archdiocesan newspaper, Cardinal Joseph W. Tobin of Newark, New Jersey, former archbishop of of Indianapolis, agrees that Archbishop Thompson has an advantage “being from this area of the country, and having worked in Indiana. As a canonist, he assisted Archbishop Buechlein in a lot of ways. So he has some knowledge of the face of the archdiocese.”

Archbishop Buechlein headed the archdiocese from 1992 until his retirement in 2011.

Cardinal Tobin said Archbishop Thompson “combines a very warm style with a keen intelligence and some real spiritual values. He has a sense of humor, and he has a lot of energy, and all of that will serve him well.”

Cardinal Tobin also noted that Archbishop Thompson is “a man of dialogue.” He found evidence of this in the 56-year-old leader’s handling of a process in the Evansville Diocese similar to the archdiocese’s “Connected in the Spirit” planning process, which examined ways in which the local church could best serve its communities in changing times.

“One difference was there were no appeals from it, even though people could appeal — which I found significant at the time,” said Cardinal Tobin. “That meant he prepared the people, he listened to them, and he could make a coherent argument for these difficult decisions that he had to make.”

While Cardinal Tobin’s acquaintance with the new archbishop extends four years, Msgr. Frederick Easton, adjunct vicar judicial of the metropolitan tribunal, said he and Archbishop Thompson “go way back” through their shared background in canon law.

“I think he will fit in with our long-standing culture,” he said. “I think he’ll be a good combination of a continuance (of Cardinal Tobin’s direction) but with a new perspective. I think he’ll be sympathetic to a lot of our concerns here, and he’ll be a person who makes decisions that need to be made.”

Msgr. Easton said he was delighted when he heard the name of who was being named to Indianapolis. “I thought it was a good choice,” he said.

So did Glenn Tebbe. As executive director of the Indiana Catholic Conference, Tebbe has worked with Archbishop Thompson since he was appointed bishop of Evansville in 2011.

“This is good news,” he said. “He’s a total package, a very faithful man. He listens and is able to bring the essence of what needs to be done to the forefront and makes good decisions. I think he’ll be a strong shepherd for the archdiocese.”

Tim McGuire, chancellor and chief operating officer of the Evansville Diocese, attests to Archbishop Thompson’s ability to shepherd a diocese.

So is retired Evansville Bishop Gerald A. Gettelfinger, whom then-Bishop Thompson succeeded, The retired bishop was ordained a priest for the Archdiocese of Indianapolis.

“He’ll be a great leader and a wonderful gift from Evansville to Indianapolis and to the state of Indiana,” said Bishop Gettelfinger.

In witnessing then-Bishop Thompson take over leadership in the Diocese of Evansville, the retired bishop said he has found the younger man to be “a great listener, a collaborator. He’s not a dictator.”

Mary Jeanne Schumacher, director of communications for St. Meinrad Seminary and School of Theology in southwest Indiana, has become familiar with Archbishop Thompson during his visits to the school. The prelate studied for the priesthood there and later was a visiting professor of canon law.

“I think the people of the archdiocese are going to be very happy to have someone leading them who is very much of the people, is very comfortable being in both a rural and urban area,” she said.

Norbert Krapf, a member of St. Mary Parish in Indianapolis, grew up in the Diocese of Evansville. Sadly, he suffered sexual abuse by a priest there in the 1950s.

Years later, after writing a book of poems and a memoir to help in his own healing and that of other abuse victims, he was invited by then-Bishop Thompson to read from his work to diocesan staff at the chancery.

He found him to be a “hospitable, kind, understanding and congenial” man who “relates to people on their level, does not present himself as above them, but is also a fine leader.”

“He is very humble,” says the member of St. Monica Parish in Indianapolis and a French-speaking native of the African nation of Togo. “He’s just open. It’s another blessing to us. We waited (seven) months, but we’ve got another good one.”

Also at the news conference was Casey Foley, a member of SS. Peter and Paul Cathedral Parish in Indianapolis. He addressed Archbishop Thompson at the conference and later met him.

“He is very charismatic and engaging,” said Foley. “There’s something magnetic about his personality and his demeanor. He’s very approachable and unassuming. … He felt like a companion, like we are on a journey together. He’s about as friendly a companion as I could imagine.”

Natalie Hoefer is a reporter for The Criterion, newspaper of the Archdiocese of Indianapolis. Criterion reporter Sean Gallagher contributed to this story.