Bishop Kevin C. Rhoades joined Pope Francis in the Consecration of Russia and Ukraine to the Immaculate Heart of Mary at St. Pius X Parish in Granger on Friday, March 25.

Catholics from around the diocese joined Bishop Rhoades, and more than 6,100 devices accessed the online stream of the consecration.

“I am so happy to be at St. Pius to pray the rosary and to do the act of consecration to the Immaculate Heart of Mary today,” Bishop Rhoades said. He also mentioned that this marked the fifth anniversary of when he had dedicated the new church building at St. Pius X. 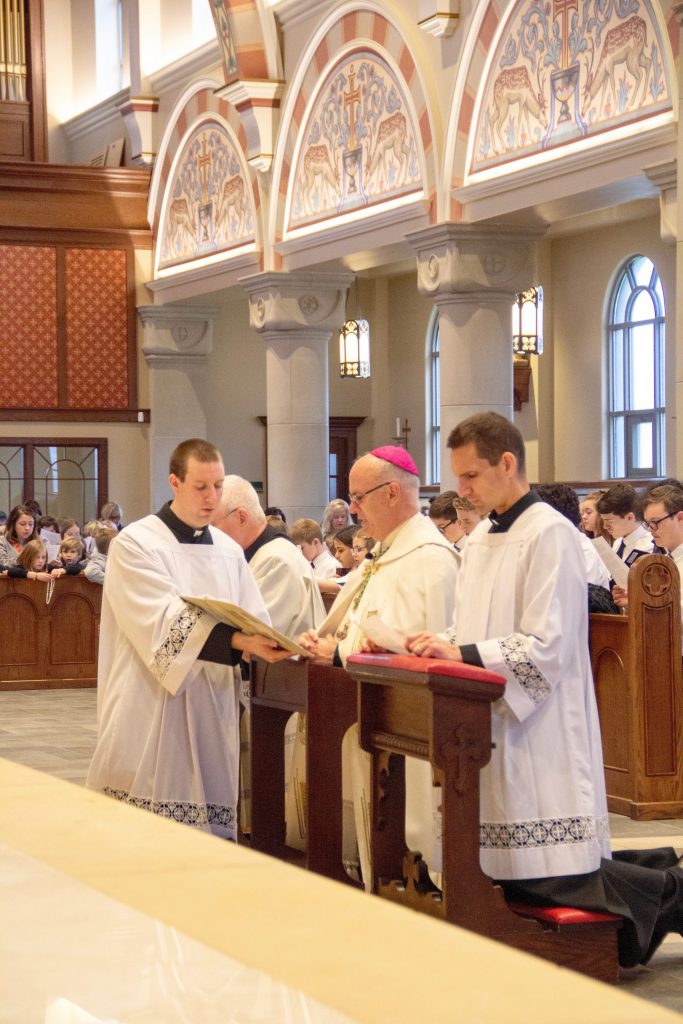 Samantha Rohloff
In union with Pope Francis and bishops from around the world, Bishop Kevin C. Rhoades consecrated Russia and Ukraine to the Immaculate Heart of Mary on the Solemnity of the Annunciation, March 25, at St. Pius X Parish in Granger. Msgr. William Schooler, Pastor of St. Pius X, Father Nathan Maskall and Father Matthew Coonan aided the bishop in reciting the rosary prior to the consecration.

In mid-March, the Vatican announced that Pope Francis would consecrate the two countries on the Solemnity of the Annunciation of the Lord, a little more than one month after the Russian military invaded neighboring Ukraine.

Many drew connections from the ongoing invasion and subsequent consecration to the July 13, 1917 Fatima apparition where Our Lady asked for the consecration of Russia to her Immaculate Heart.

Many popes through the last century have completed similar consecrations to that of 2022.

According to Vatican News, “on 31 October 1942, Pope Pius XII consecrated the whole world, and on 7 July 1952 he specifically consecrated Russia to the Immaculate Heart of Mary with the Apostolic Letter Sacro vergente anno, in view of the difficult situation of Christians forced to live in an atheistic communist regime. Later, Pope St. Paul VI in 1964, and Pope St. John Paul II in 1981, 1982, and 1984 renewed this consecration of the whole human race.” 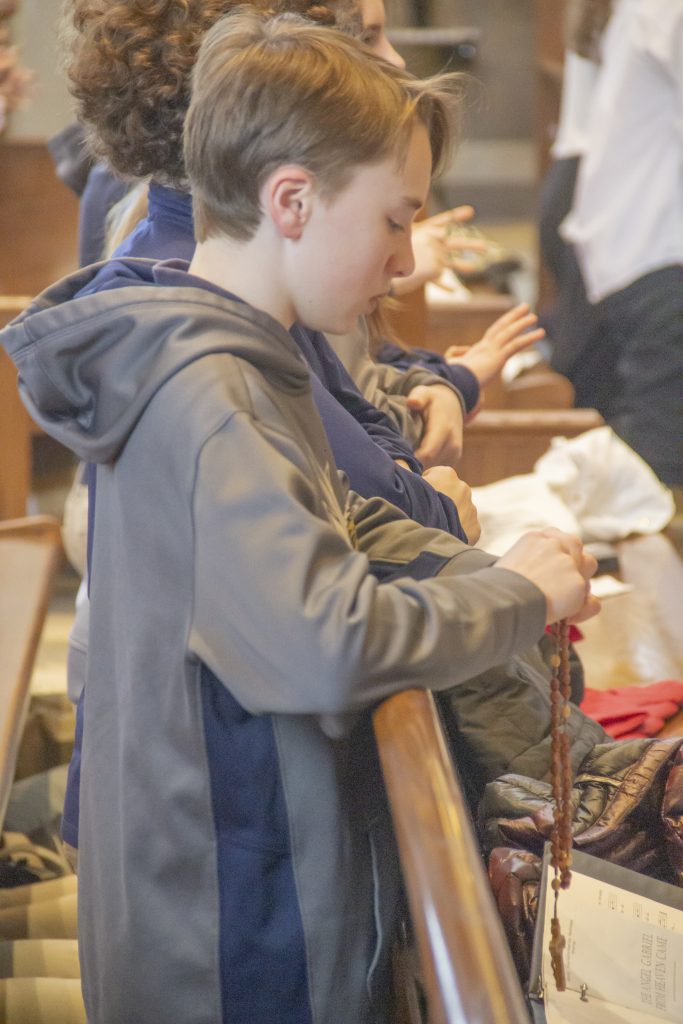 During the March 25, 1984 consecration, Pope John Paul II first consulted with Servant of God Sister Lucia, who was present at the 1917 apparition, to ensure that this consecration would fulfill the request made by Our Lady. The pope consecrated “in a special way … those men and nations who are in special need of this entrustment and consecration” in spiritual union with bishops around the world.

The then-secretary of the Congregation for the Doctrine of Faith, Archbishop Tarcisio Bertone, said in 2000 that Sister Lucia personally confirmed that the 1984 consecration had fulfilled the request made at Fatima, according to Vatican News.

Pope Francis, Bishop Rhoades and the bishops of the world echoed this consecration in 2022, this time specifically mentioning Ukraine and Russia in the act.

“Therefore, Mother of God and our Mother, to your Immaculate Heart we solemnly entrust and consecrate ourselves, the Church and all humanity, especially Russia and Ukraine.” 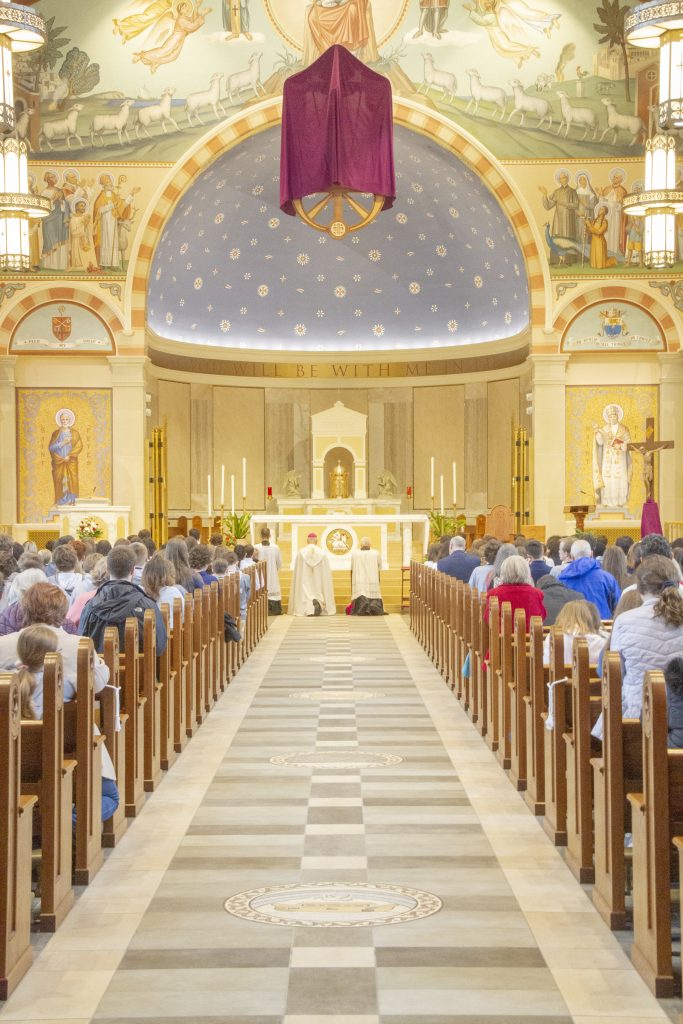 Pueri Cantores groups in the Diocese of Fort Wayne-South Bend, who gathered at St. Pius X to celebrate Mass with the bishop that afternoon, provided some musical accompaniment before and after the act of consecration.

Prior to the consecration, Bishop Rhoades, Monsignor William Schooler, and Fathers Nathan Maskal and Matthew Coonan led those gathered in person and those watching online in reciting the rosary.

Bishop Rhoades has been vocal about supporting Ukraine and condemning the unjust invasion by Russia. He suggests that members of the diocese who wish to help can do so through support of Catholic Relief Services.

CRS reports that they provide a range of support in Ukraine by running field kitchens to serve hot lunches and snacks, as well as transporting displaced families to friends, relatives and social services. The organization also offers reception services to provide clothing, information, referrals and more to those displaced by the invasion. They report that their local partner has received “nearly 315 tons of relief items through humanitarian convoys from EU partners. Nearly 56,000 affected people have received assistance including food, hygiene items and emergency shelter.”

“We ask Mary to intercede for the world today,” Bishop Rhoades said. “In fact, when we pray the rosary, we are praying this rosary for peace in the world, especially in Ukraine where so many people are suffering because of the war. As you know, Ukraine was invaded by Russia, and many people have been killed and continue to be killed even today.”