WARSAW, Poland (CNS) – Church leaders in embattled Ukraine have warned that foreign missionaries could be targeted by attacking forces, while many could be branded “NATO spies” if Russia occupies the country.

“Clergy from Western countries will certainly be at risk – the Soviet rulers viewed priests and nuns as Vatican spies, and now they’ll be spies of NATO and the European Union,” Auxiliary Bishop Jan Sobilo of Kharkiv-Zaporizhia told Catholic News Service on March 3.

“Judging by what’s happened in other occupied areas, we can also expect restrictions on Masses and other activities. By defending Ukraine, we are also defending the Catholic Church,” he said. 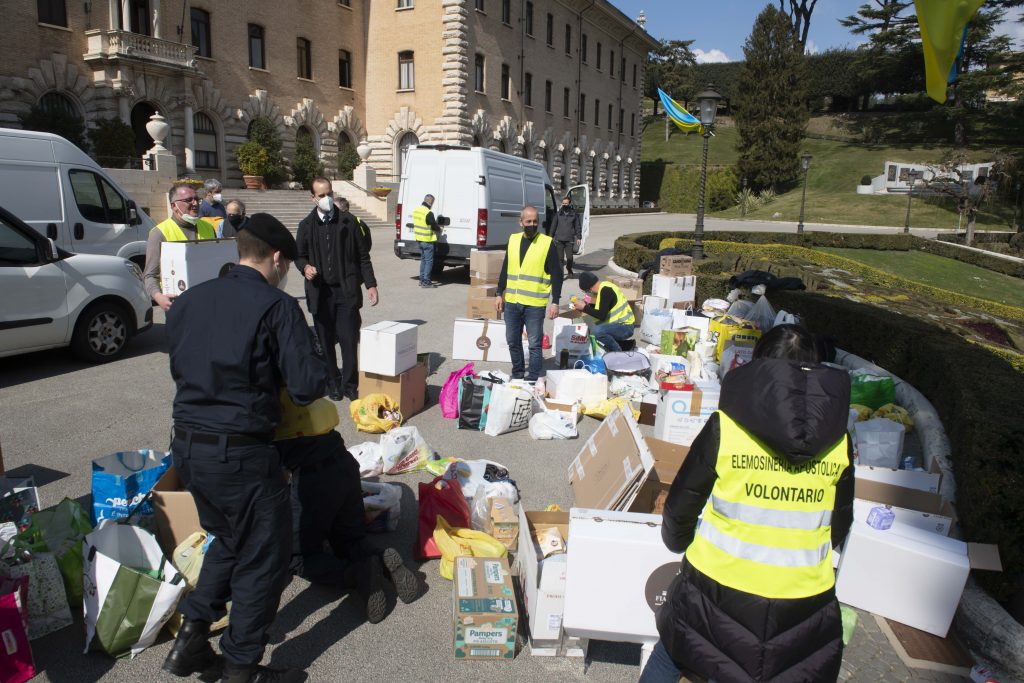 People sort donations from Vatican employees for Ukraine outside the Governatorato, a building housing the Vatican’s governing offices, at the Vatican March 7, 2022. (CNS photo/Vatican Media)

A Polish priest in Kharkiv said he also feared repression against foreign clergy, especially those from Poland and other NATO countries. “We were all given a free choice to leave or stay by our bishops – and while a few have had to go, almost everyone else has remained,” Father Wojciech Pasiewicz, director of the Caritas-Spes charity in the partly destroyed eastern city, told CNS on March 3.

“Given the restrictions and controls placed on freedom and democracy in Crimea and other regions, we can clearly expect the same here and anticipate real dangers from the Russians,” he said. “But what matters now is that this war ends, and people are allowed to return to their homes and churches.

“We are simply praying and doing all we can to stay in touch with our faithful, while many hide out in parish basements,” Father Pasiewicz told CNS. “The children are terrified, and there’s fear and panic everywhere, with some still hoping to be evacuated. We should all be praying for peace and mourning the dead, uniting in hope that this will all end today or tomorrow.”

Bishop Sobilo told CNS that the civilian population has now mobilized to defend the country. He said many Russian soldiers appeared “disorientated and demoralized” by the fierce Ukrainian reaction, but feared being shot if they attempted to surrender and withdraw.

“President Putin has united this nation through the war, creating huge opposition to Russia,” the Polish-born auxiliary said. “Even those who were previously unsure which stance to take are now determined to fight to the end. They’ve seen how Russian propaganda works – and how this criminal state structure must be destroyed once and for all for peace to be possible.”

Hundreds of Polish priests and nuns have helped run Catholic parishes and charity projects since Ukraine’s 1991 independence and are currently stranded in its eastern and southern war zones.

Polish Father Piotr Rosochacki, who heads Caritas-Spes on the Black Sea, told the Polish Catholic news agency KAI that the situation was growing “increasingly desperate,” adding that “all principles for waging war” had been violated in the bitter fighting.

Bishop Sobilo told CNS that some Polish clergy had been forced to leave for health reasons or a lack of relevant documents, adding that he had ordered one priest to quit his parish, unwillingly, fearing harm from Russian troops. However, he added that the “decisive majority” had remained in place, helping people who had fled other cities.

“In Russia itself, the Catholic Church isn’t well regarded and has continual problems,” he told CNS. “So we can be sure we’ll find ourselves in a very difficult, bad situation if we’re occupied.”

Russian troops continued to close on Kharkiv, Ukraine’s second-largest city, on March 3 as tens of thousands fled the fighting and Western governments backed an investigation by the International Criminal Court into alleged war crimes by invading forces.

Shelling damaged the Assumption Orthodox Cathedral in Kharkiv, reportedly with windows and other decorations broken, The Associated Press reported on March 3.

In his national address that day, Ukrainian President Volodymyr Zelenskyy pledged to restore Kharkiv’s cathedral. “Even if you destroy all our Ukrainian cathedrals and churches, you will not destroy our sincere faith in Ukraine and in God,” the president told Russians.

The Associated Press also reported that representatives of Russia and Ukraine had agreed to allow humanitarian corridors to allow for aid and for civilians to evacuate.