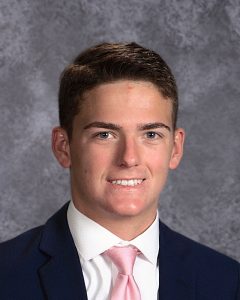 After graduating from St. Elizabeth Ann Seton School, Jon Ellis knew that he had a shot at exceptional academics as he entered Bishop Dwenger High School.

“Coming into Dwenger, I knew I had the possibility to be high in the class, but I had no idea I’d be valedictorian.”

Ellis said he knew that he had to put great effort into his schoolwork to compete with his peers.

“I knew that it was going to be much more difficult than middle school or anything else. And so it just kind of included me always staying focused on the goal of not just trying to be valedictorian, but just trying to do my best and do the best that I can.”

During his time at Bishop Dwenger, Ellis participated in numerous extra-curricular activities. He was inducted into the National Honor Society and served as the activities director. Ellis was also a member of the Spirit Club, student council, and Students Against Destructive Decisions (SADD).

The extracurricular that stands out the most to Ellis in the past four years at Bishop Dwenger was his role as a member of the football team. “It was a sense of your own community within Dwenger, which made it pretty special.”

He recalled one of his favorite memories was watching the Saints win the 2018 state football championship during his freshman year. “To be there, to be in the stands, was incredible.”

Ellis said that he particularly enjoyed taking AP U.S. History during his junior year. “I’ve always really liked history, and just really diving in deep to that. I just really enjoyed it.”

Ellis said that his teachers all give him and his classmates similar advice – advice that he credits with helping him achieve his number one class rank.

“Especially throughout the beginning of high school, all these teachers just told you ‘Know your limits and don’t stress out about not being able to do everything you can.’ Obviously, each person has things that aren’t in their realm of possibility. And just to know those, and not to try to exceed them because then you’ll just get too stressed out and won’t be able to do them to your best ability.”

He also offered some advice for underclassmen and incoming freshmen who want to be successful in high school.

“Don’t let one bad grade or one bad test or something like that get you down. Just move on to the next one and try to improve on what you didn’t succeed at.”

He says that his Catholic faith played a big role in his high school experience because, “throughout all the classes, all the teachers do a really good job of integrating teachings of the faith and Catholic doctrines. Even if it’s like history that I’m studying, I’m also always learning more about the faith. Through my education, I was able to better become a more well-versed person in the faith.”

Ellis will attend the University of Notre Dame to study business with the ultimate goal of going to law school.