Over 200 students from Bishop Dwenger High School, Fort Wayne, carried large flags and a banner that lead the 46th annual National March for Life in Washington, D.C., on Friday, Jan. 18. The school was selected for the honor this year from among the thousands of Catholic high schools in the U.S., and the Bishop Dwenger students responded in force and with great joy over the opportunity to lead the thousands who demonstrated support for the lives of the unborn.

The students’ journey began earlier that same week, when Sen. Todd Young of Indiana held a video conference with the seniors who planned to attend the march. After commending the students, Sen. Young opened the floor to questions. One student inquired if Sen. Young believed marches like the March for Life actually bring forth change in the world. The senator responded that they are “incredibly impactful,” citing other marches that have effected change, including the march for civil rights and marches for women’s voting rights. He thanked the students for continuing to inspire those who are not yet convinced, and for encouraging those who are pro-life. 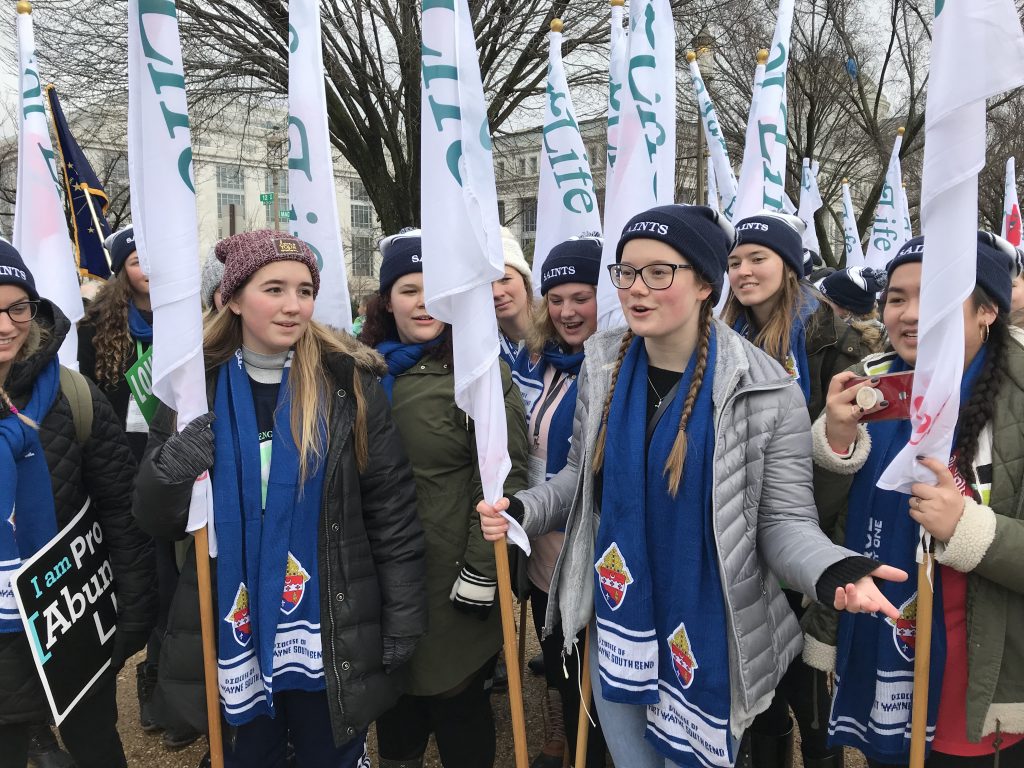 Young women from Bishop Dwenger High School, Fort Wayne, explain to a reporter why they chose to participate in the march.

Prior to departure, the students celebrated Mass in Queen of All Saints chapel. During the homily, chaplain Father Jay Horning reminded them that this journey to the capitol was not merely a trip, but a pilgrimage. A “pilgrimage” implied discomfort and inconvenience, he noted, adding that this particular pilgrimage would not be easy. He was proven correct several times during the trip, including on the early morning of Friday, when one of the buses among the school’s contingent broke down on the highway.

Although delayed, around 9:30 a.m. the students arrived steps of the Capitol building. They celebrated Mass on Capitol Hill at St. Joseph Parish, with Father Horning and fellow chaplain Father David Huneck, who expressed thanks to the parish during his homily for allowing the pilgrims to worship in the church on short notice. He next drew a parallel between the pilgrims’ journey and the story of the Nativity, noting that the Holy Family searched for an inn, and when none was found, St. Joseph led his pregnant wife to a stable where she gave birth to the Lord. In a similar way, he said, St. Joseph, the patron of the parish, found a church for the pilgrims to celebrate Mass. 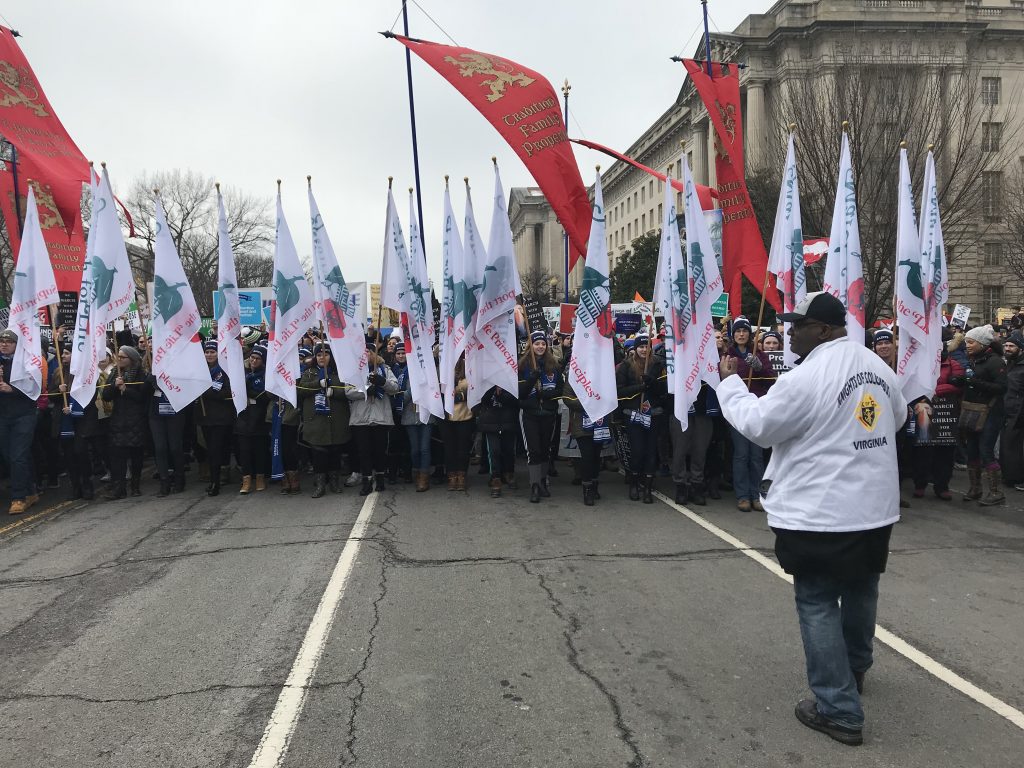 After over an hour of waiting, the Bishop Dwenger flag bearers receive permission to begin the march.

Afterwards, the pilgrims met the Knights of Columbus of Virginia to receive the flags they would carry at the lead of the march. Breathing the cold, winter air while a pre-march rally with speaker Ben Shapiro ended, they were joined by U.S. Rep. Jim Banks. Rep. Banks gave the students advice about how to engage pro-choice Americans in a discussion about the sanctity of life. “At the end of the day, the best conversations I have with those I disagree with are respectful, often rooted in relationships,” he said. “In our tribal society today, what’s lacking is we don’t have relationships with people who we don’t agree with often enough. So, it’s important to build relationships with people before you start arguing with them about issues. We need to surround ourselves with people who don’t always think and believe what we do, and then develop a relationship with them, and then, try to win them over, convince them, especially on the right-to-life issue.”

Along the mile-long march to the Supreme Court, bands played and people cheered the marchers to chants of support for life. The Bishop Dwenger Saints smiled and chanted along as they approached the Supreme Court building where Roe v. Wade, the case that legalized abortion over four decades before, had been decided.

The students experienced little opposition to the walk from their vantage point at the front of the crowd, but some was directed at the crowd that followed them. The pilgrims heard chants accusing Catholics of Marian worship, and suggesting that abortion would end, “When you stop praying to the Virgin Mary.” This was met with a loud praying of the Hail Mary, the prayerful voices drowning out the voices of the protesters. 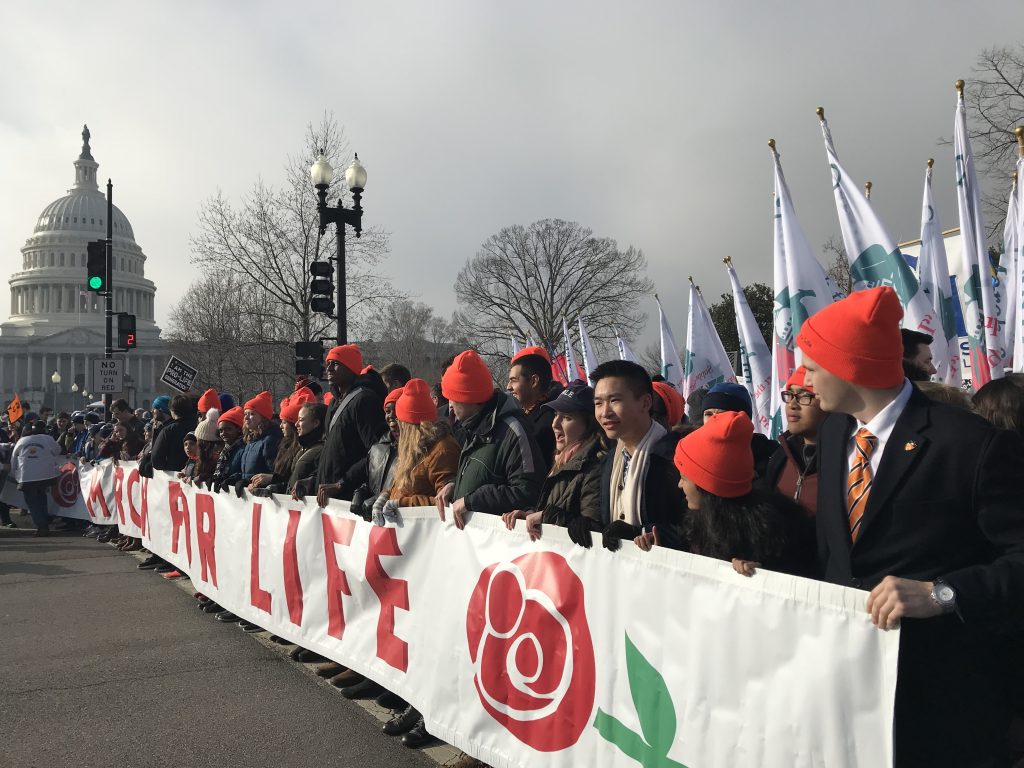 The march reaches its destination, the U.S. Supreme Court. Assisting Bishop Dwenger students with the banner are college students from the Diocese of Tulsa, Okla. — Photos by Joshua Schipper

Many student participants in the National March for Life, including those below from Bishop Dwenger High School, Fort Wayne, expressed their pro-life convictions on social media using the official March for Life hashtag #whywemarch.

Nancy Le: I marched for those who couldn’t march and to get the word out about this. I put this everywhere on my social media so everyone can be informed. Along with that, it shows how devoted we are to get this abortion law out so the children can be saved and given a chance to live.

Liam Row: We march for the those who can’t march for themselves, the millions of innocent babies who are helplessly murdered every year. We march to change the immoral and unscrupulous idea that began with Roe v. Wade in 1973. So that every single human will be given their fundamental right to life and may live as God intended, this is why we march.

Olivia Eagan: I march because these babies are being killed without a say in what happens to them. They don’t have a voice and they need someone to advocate for their lives. It’s not right that these children are stripped of their lives because of another persons decision.

Erin Strzelecki: I march because I believe that all human beings, even the tiniest, deserve a voice. I want to make a difference in protecting the vulnerable, unborn children who cannot stand up for themselves.

Julia Eckrich: I go on the march because it sparks hope in my heart to be surrounded by thousands upon thousands who support the same cause. It is disheartening to be surrounded by society who primarily disagrees with anyone who is pro-life. I pray that one day it will be a march of celebration, but until then we must keep supporting one another and not lose hope and trust in God.

Angie Centlivre: I marched for those who don’t have a voice yet. Maybe those children that were saved by the march will one day march for others.

Peyton Davis: We march to secure a better future for our nation. By allowing abortions to take place in our country, we are saying that we accept only the best. If we say that, then we are not the best.

Vincent Yanko: I march because the right to live is a universal human right and should not be taken away no matter the circumstance. The United States was founded on the ideals of life, liberty, and the pursuit of happiness. Taking away the right to live undermines the blessing that is natural conception.

Amy Korson: We march because we are speaking for the millions of innocent unborn children. It was a truly incredible experience to be a part of something so beautiful as coming together not for our own needs, desires, or wants, but for others. We march to hopefully give others the hope, courage, and love that they need in order to choose life for their babies. We are not marching for ourselves; we are marching to support the love of all lives.

Carmen Schuckel: I march because I believe that everyone deserves a chance at life regardless of their age, race, or gender. We are called to be the voice for the voiceless and stand up for the innocent.

Hannah Ewing: I march for the ones who can’t, the ones who have no voice. This March is greater than any one person, so coming together as a nation truly makes a difference. I hope that I can save the lives of unborn babies with every step and stand I take.

Rose Yolevich: Every life is precious and deserves to be lived from conception to natural death. Life is beautiful in every stage at any age. I am beyond blessed to have been a part of such an amazing event to fight for this important cause!

Holly Burnham: I march for the babies. I march for the women that are pregnant or that have been pregnant and don’t know what there going to do. I march so that my kids and generations after them can see a world that loves and cares for the helpless .

Morgan Schenkel: I march because I have two disabled people in my family who make my life great. My uncle has a mental disability and my cousin has a physical disability and if they weren’t in my life because of that I wouldn’t know true strength or happiness. They are the strongest people you will ever meet and some of the happiest people because they see can see the little blessings in life.

Adam Yaggy: We march because 1,522,000,000 are missing from our world. They would have been our friends, classmates, teachers, and priests if they had been given a chance to live. They are the Mother Teresa or John Paul II that we will never know.