“When they are anointed with chrism in Confirmation, they will be drawn more deeply into God’s life and love, into the life and love of the Father, the Son and the Holy Spirit,” Bishop Kevin C. Rhoades told worshippers gathered at St. Matthew Cathedral, South Bend, of the about 75 adults gathered on the Solemnity of the Most Holy Trinity, May 27 — as he had assured those accompanying around 34 candidates the previous evening at the Cathedral of the Immaculate Conception, Fort Wayne.

Although we cannot fully understand the mystery of the Trinity, he said, it is a mystery we believe because it was revealed to us by Jesus. 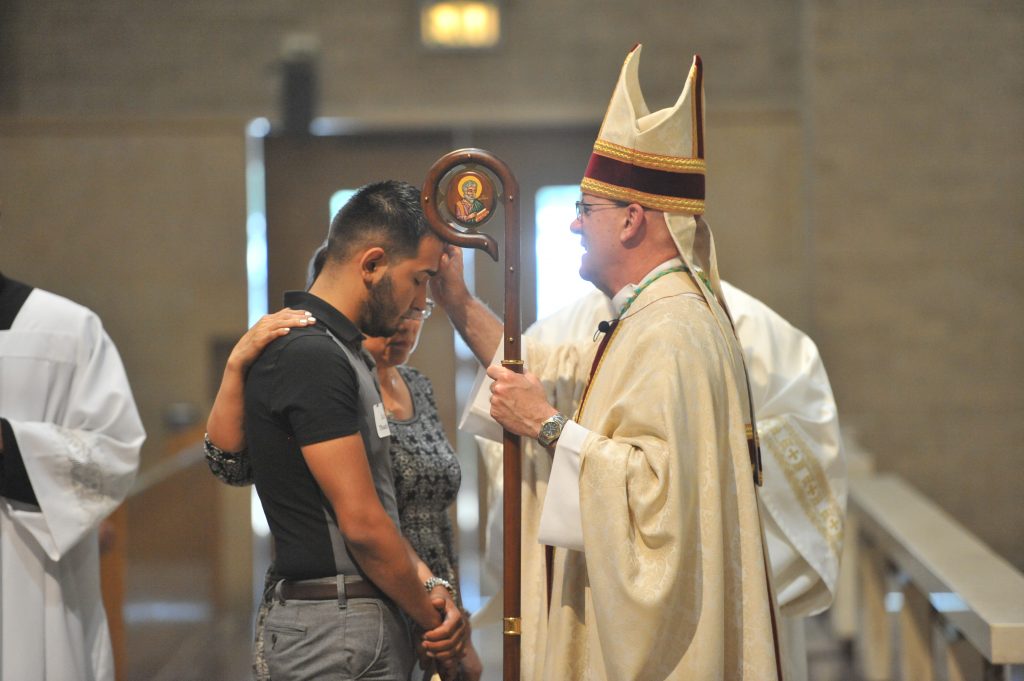 “Jesus, the eternal Son, revealed to us the Father and the Holy Spirit. In the Gospel today, Jesus instructed the disciples to go and make disciples of all nations and to baptize them in the name of the Trinity, in the name of the Father, and of the Son, and of the Holy Spirit. Though, as I mentioned, the mystery of the Trinity infinitely transcends us, it is also the reality closest to us, because God is the very source of our being and we received a share in His divine nature when we were baptized. The Holy Trinity made His dwelling within us. We received a spirit of adoption, as St. Paul wrote to the Romans … As children of God, we can call God ‘Abba,’ Father. When we were baptized in the name of the Holy Trinity, we became adopted children of God. We were united to Christ the Son and received His new life. And we became temples of the Holy Spirit. The love of God was poured out into our hearts through the Holy Spirit that was given to us.” 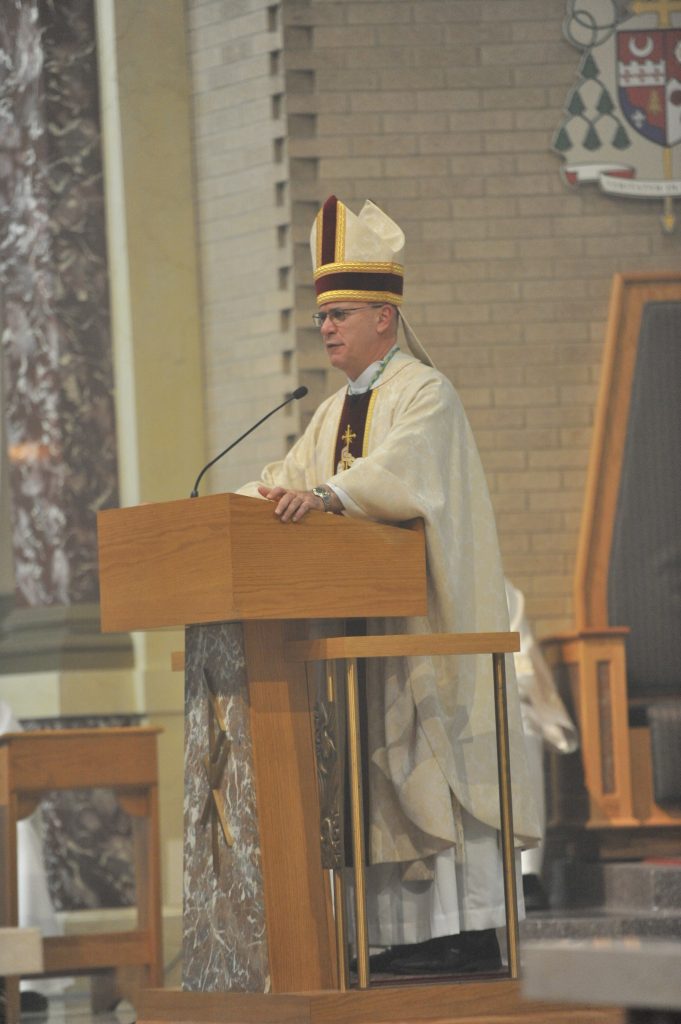 Bishop Rhoades speaks on the occasion of the feast of the Most Holy Trinity at St. Matthew Cathedral, South Bend. About 75 adults were confirmed at the Mass. — Joe Raymond

The candidates had chosen patron saints as their confirmation names, he continued. The saints teach that the true treasure of life is living in the love of the Blessed Trinity and never losing this love.

“With the gifts of the Holy Spirit they will receive in the sacrament of Confirmation, our brothers and sisters will be strengthened to live in the Father’s love as faithful disciples of His Son, Jesus. They will receive an increase and deepening of baptismal grace and become more deeply rooted in their Christian identity as sons and daughters of God the Father and more firmly united to Christ the Son and to His Church.” 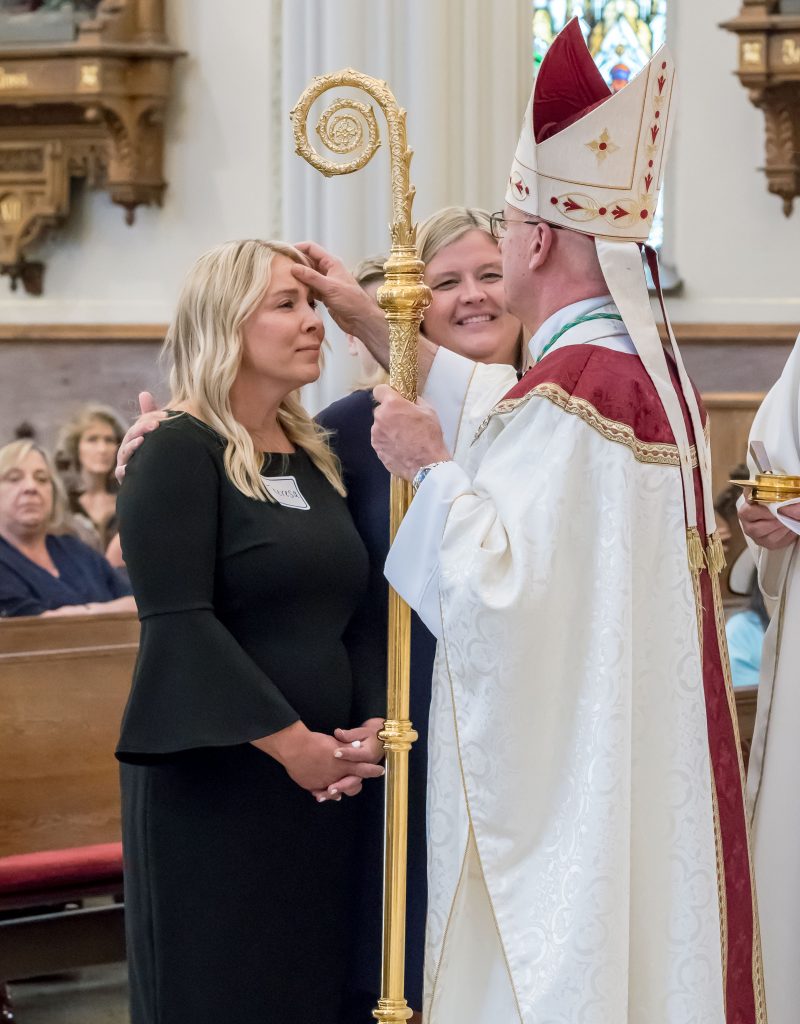 Bishop Rhoades anoints the forehead of Jennifer O’Herron with the Oil of Chrism in the sacrament of confirmation as her sponsor, Lauren Slater, stands by her. Joe Romie

Lori Massa, RCIA director at St. Vincent de Paul Parish, Elkhart, accompanied 24 of her parishioners who were being confirmed at St. Matthew. She explained that parents often approach the parish seeking baptism for their young children. During that interview, she may learn that the parents have never been confirmed. Often, they also desire a sacramental marriage. The parish tries to be thorough in preparing people for these sacraments, but also accommodating of irregular work schedules.

When a bilingual RCIA was proven burdensome for the Spanish speakers, St. Vincent was able to offer instruction in Spanish. Olga and Gilberto Aceves were among the couples who have been able to celebrate both sacraments this year. Of course, among the over 100 candidates confirmed at the two Masses there were 100 different motivations, but each candidate was drawn to a closer relationship with Jesus Christ by the Holy Spirit.