At vigil Masses on June 8 and June 15, 77 adults were “strengthened by the Holy Spirit through the reception of the sacrament of confirmation,” in the words of Bishop Kevin C. Rhoades. “You receive that fire today — the power and strength of the Holy Spirit to live your faith with conviction and to bear witness to Christ with zeal and courage,” he told the candidates. 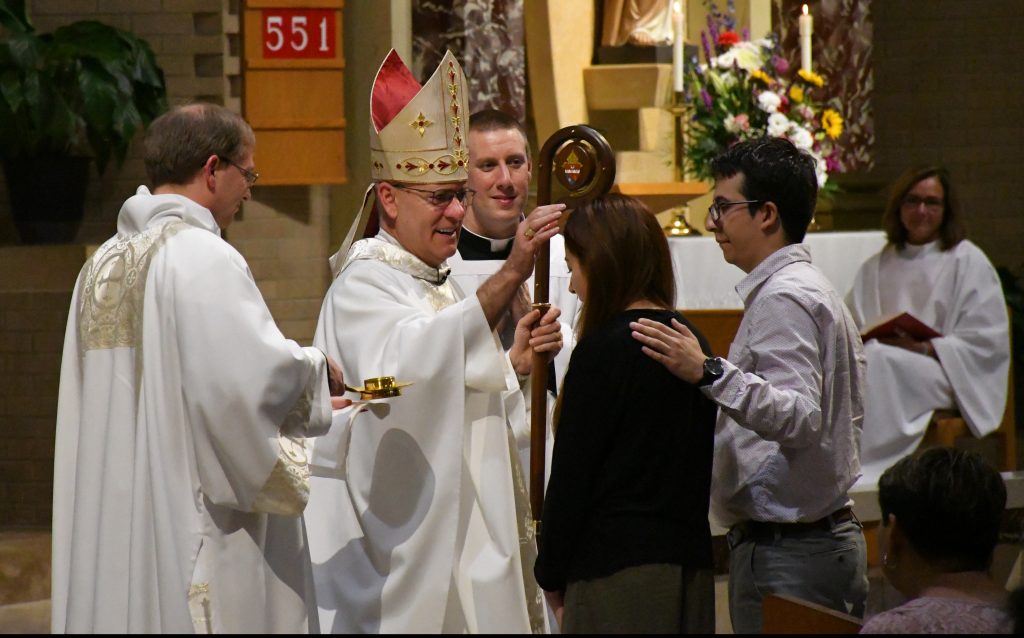 Click here for more photos from the South Bend confirmation.

Click here for more photos from the Fort Wayne confirmation.

Bishop Rhoades alternated between Spanish and English in his remarks and the eucharistic prayer. In a further sign of the universality of Christ’s body on earth, he requested prayer for a retreat for the bishops of China, at which he was about to preach.

Two women who stepped forward to receive the sacrament that completes their initiation into the Church were Marlin Villegas from St. Therese, Fort Wayne, and Jane Yuhasz from Holy Cross Parish, South Bend.

For Villegas, the preparation helped her “fall in love with my Catholic faith.” Baptized Catholic in Guatemala, she came from a family that didn’t practice their faith. The uncle who played a significant role in raising her was Baptist, so most of her faith experience was in that tradition. She came to the United States when she was 10 years old. 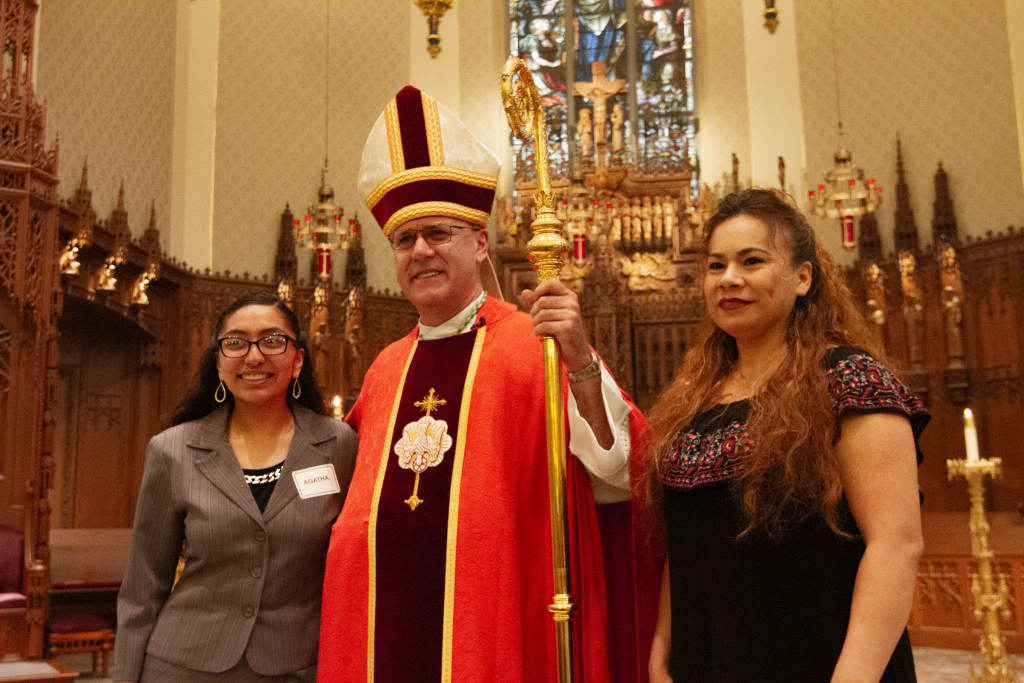 A newly confirmed woman and her sponsor pose with Bishop Rhoades following a Mass of confirmation June 8 at the Cathedral of the Immaculate Conception, Fort Wayne. — Joshua Schipper

Three years ago, Villegas married a devout Catholic at St. Patrick Parish, Fort Wayne. Although she agreed to raise their children Catholic, she didn’t wish to be confirmed at the time. However, when her older son was baptized at the Easter Vigil in 2018, she became curious and decided it was time to explore the faith for herself.

She received her first Communion after being confirmed on June 9, and said she is very excited to “get back to my roots.”

Her children also played an important role in Yuhasz’s decision to complete her initiation. Students at Holy Cross School, South Bend, one received first Communion and the other was confirmed earlier this year. They and their friends were thrilled to learn that their mother also planned to prepare for confirmation. Yuhasz had been baptized and received her first Communion at Christ the King as a child, but when she was in junior high, her father died. His illness and death crowded out church attendance for the family.

Although Yuhasz works full-time at Headstart and volunteers as the athletic director and head basketball coach at Holy Cross School, she decided it was worth making time last fall to take formation classes in anticipation of receiving the sacrament of confirmation. “I didn’t feel whole,” she admitted. Through her RCIA classes and the Word on Fire DVD series produced under Bishop Robert Barron, she’s become more reflective at Mass.

She’s grateful to have taken this step as an adult. “I think I appreciate it more,” she says, than she might have as an adolescent.

Both women can confirm Bishop Rhoades’ words: “Through the gift of the Holy Spirit, God’s love for us takes hold of us, takes hold of our inmost self. This love enables us to walk the journey of our life with joy and hope even in the midst of suffering and adversity.”

On the Solemnity of the Most Holy Trinity, Bishop Rhoades urged the candidates to draw closer to the “special friends in heaven” they had chosen.

“Like your patron saints, may you open your hearts every day to the gifts of the Holy Spirit that you receive today. And if you do, do you know what’s going to happen? You’ll become saints!”

As the bishop concluded his homily on Pentecost, he took inspiration from those who had just committed their lives to the Lord and the Church in a new way, “May all of us place our lives under the active power of the Holy Spirit!” he said.