On Tuesday, Sept. 19, Bishop Kevin C. Rhoades offered the sacrifice of the Mass for Catholic Homeschoolers of Michiana, a group of families who connect to socialize and to share information about Catholic education in the home. The bishop referred to the event as his “school visit” for homeschoolers. He is including homeschoolers in his round of visits to Catholic schools in the diocese. Although these children are not enrolled in a formal school together, the Mass made it possible to gather a large group of Catholic homeschoolers to celebrate the beginning of the school year.

The Mass was celebrated at the usual 5:30 p.m. weekday time at St. Matthew Cathedral, South Bend. The liturgy of the bishop’s Mass was beautifully formal. Bishop Rhoades and his concelebrants wore red vestments in honor of the martyr St. Januarius, as the bishop explained at the opening of the Mass. The altar servers were children of homeschooling families, and cantor Mark Hoipkemier is a homeschooling dad. The concelebrants with Bishop Rhoades represented multiple parishes, including Father Terry Fisher, pastor of the cathedral of St. Matthew; Father Glenn Kohrman, pastor of St. John the Baptist and Holy Family parishes; and Father David Violi, parochial vicar of Holy Family.

At the beginning of Mass, the bishop expressed his surprise at the number of small children present. Later, just before dismissing the congregation, he joked that it was highly unusual for him to celebrate a Mass at which more than half the congregation was under the age of 7.

Though CHS Michiana’s activities are focused mainly on school-aged children, many of these families also include little ones who haven’t yet started school. John Sikorski, one of the organizers of the event, said that there are many Catholic homeschoolers in the diocese, even beyond the membership of the Catholic homeschoolers’ association. But according to John Adamson, who currently leads CHS Michiana with his wife Hollie and a third co-coordinator, longtime homeschooling mom Alisa Hubbard, CHS Michiana is growing rapidly: “In the past five years, the group has gone from 37 families to 90 families.” As Adamson pointed out, if each family has an average of five children, that adds up to 450 kids! As one might expect, however, the number of children in homeschooling families varies widely, from single-child families to large families with six or more children. Adamson himself is the father of two elementary-aged homeschoolers and a new baby boy.

According to the co-coordinator, the largest number of homeschoolers in CHS Michiana come from three parishes: St. Pius X in Granger, St. Matthew Cathedral and St. Stanislaus Bishop and Martyr. At St. Stanislaus, Msgr. John C. Fritz oversees a parent-run homeschooling co-op that offers opportunities for children to meet weekly in a classroom setting to learn certain subjects that would best be studied in a group, such as drama and book discussion. “Most people think the bad thing about homeschooling is you don’t see your friends, but that’s not true,” said Angela Philpott, age 11, who attends the St. Stanislaus co-op. Susan Greutman, serving as prefect, ensures a balance between academic and social activity among the students. 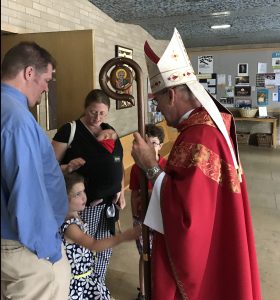 Bishop Rhoades greets Dave and Suzy Younger, of Granger, and their children following a Mass for Catholic Homeschoolers of Michiana at St. Matthew Cathedral, South Bend, on Sept. 19. 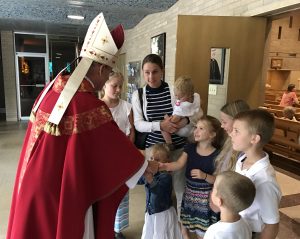 Bishop greets Kathy Downey with her children following a Mass for Catholic Homeschoolers of Michiana at St. Matthew Cathedral, South Bend, on Sept. 19.

After Mass the group proceeded to the St. Matthew’s school gym, graciously lent to them for the event. Sister Gianna Marie Webber, principal of St. Matthew School, was there to supervise. Older children made use of the space by playing a lively game of basketball, while younger children ran up and down a raised stage. As well as this Mass and potluck celebration, which looks to become an annual event, homeschoolers organize a big back-to-school picnic and a well-attended All Saint’s Day party each year, and numerous smaller events.

When asked what he finds special about saying Mass for children, Bishop Rhoades responded, “I love celebrating Mass with children, their happiness, their joy in praying… and especially their devotion.” Though they are learning in different environments than other Catholic school children, their fundamental beliefs are the same. As Bishop Rhoades said in his homily, “God still visits his people. He visits us today in the holy Eucharist. He comes to us through his Son’s body and blood, and we give thanks. … We must teach this especially to our children.”

To learn more about the Catholic Homeschoolers of Michiana, contact Jon and Hollie Adamson at [email protected].

Claire Capdevielle is a 7th-grade Catholic Homeschoolers of Michiana student.