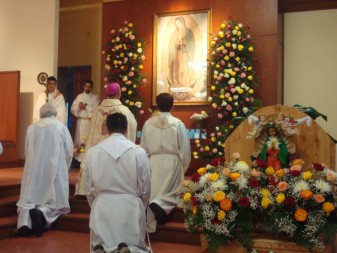 By Jodi Magallanes and Kay Cozad

WARSAW — On the eve of her feast day, Our Lady of Guadalupe gained a new caretaker for her shrine. Bishop Kevin C. Rhoades installed Father Constantino Rocha as the pastor of Our Lady of Guadalupe Church and Diocesan Shrine in Warsaw on Saturday, Dec. 11. Father Paul Bueter, Father Fernando Jimenez and Father Rocha concelebrated the 3 p.m. Spanish-language Mass.

Father Rocha told the worshippers that Our Lady of Guadalupe’s feast day has coincided with other milestones in his life, but that this was the first time his installation as a “párroco” fell so close to the date.

Immediately following his ordination in Mexico City a number of years ago, Father Rocha celebrated his very first Mass in her basilica during her feast.

In 2000 he accepted an invitation from Bishop John M. D’Arcy to come to the Diocese of Fort Wayne-South Bend, and arrived at his assigned parish, St. John the Evangelist in Goshen, just a few days before numerous activities in honor of her feast day were to be celebrated.

“I see it as a son before his mother,” Father Rocha said. “During important moments, there she is. There has to be something to that.”

A traditional Mexican mariachi band accompanied a “pianito,” or small platform, which several men carried on their shoulders as they walked from State Road 15 up Gilliam Drive and into the shrine to initiate the Mass. The platform supported a statue of Our Lady of Guadalupe and vases full of red and yellow roses. The men who carry it are called “Guadalupanos” and spend much of the year planning the celebration.

Although Our Lady of Guadalupe was declared to be the patron saint of all of the Americas by Pope John Paul II in 1999, she is particularly and widely adored by Mexicans. She appeared to an indigenous Mexican, Juan Diego Cuauhtlatoatzin in 1531 on a hill on the north side of present-day Mexico City and sent him to his bishop with a request that a church be built for her. When the bishop doubted, she appeared three more times and told Juan Diego to collect roses that she would grow for him and take them to the bishop as her sign.

Despite the fact that roses were out of season at the time, the flowers did grow and Juan Diego collected them in his cloak and took them to Bishop Zumarraga. When he presented them to the bishop, it was discovered that her image had been imprinted on his cloak as well. The cloak now hangs in her basilica in Mexico City.

Bishop Rhoades reminded the congregation of the message of welcome and comfort she gave to the indigenous Mexican population that had been recently conquered.

“Mary says to us, ‘Am I not here, who is your mother? Aren’t you under my protection? Are you not within my fold?’”

Mary is truly our mother, the mother of us all, Bishop Rhoades said.

“We’re here today to express our love for our mother Mary, Our Lady of Guadalupe and to praise and worship God together with her in this Holy Mass.

“You can’t proclaim Jesus Christ as true God and true man without talking about the Virgin Mary, His mother. You can’t confess faith in the Incarnation without proclaiming that the Son of God was conceived by the work of the Holy Spirit and that He was born of the holy Virgin Mary, like we say in the Creed,” he added. “Below her shadow, we follow Christ. Below her shadow, we experience His love.”

Bishop Rhoades was ordained a bishop on Dec. 9, the day recognized as her first of the four appearances to Juan Diego. He said that her words have always given him peace and strength at the beginning of each day.

Sister Joan Hastreiter, parish assistant, noted that this is the first time that the shrine has had a pastor of the same nationality as the Our Lady of Guadalupe appearances.

Many of the worshippers said they had come from Goshen to support Father Rocha in his new assignment.

“We came to accompany him,” said Fernando Vela and his wife, Ieny. “Actually, it’s really to deliver him, in a way. Being that he’s a Mexican, it’s great to have him in her shrine. His service to the diocese will continue,” said Vela. 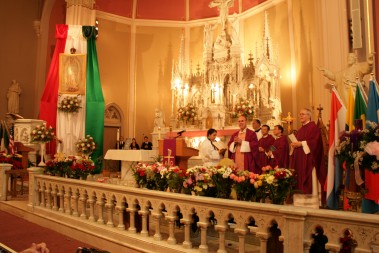 St. Patrick, Fort Wayne
Elsewhere in the Diocese of Fort Wayne-South Bend another colorful celebration took place as well. At St. Patrick Parish in Fort Wayne Bishop Rhoades concelebrated a Spanish-language Mass for a standing room only Hispanic congregation along with St. Patrick Pastor Andrew Thu Pham, and parochial vicars Fathers Chau Pham and Thomas Ascheman, all priests of the Society of the Divine Word, on Sunday Dec. 12.

A group of flag-bearing parishioners and a special young adult dance troop, adorned in rich native costumes, performed a lively dance procession that followed the celebrants to the altar. The performance was accompanied by the parish’s spirited band and choir.

The congregation, young and old alike, listened attentively as Bishop Rhoades celebrated the Mass, including his homily, in Spanish.

A second dance performance and a solemn play depicting Juan Diego’s meeting with Our Lady of Guadalupe in 1531 brought the celebration Mass to a close with cheers and shouts of praise. A grand fiesta, featuring authentic Mexican fare, was held at the parish hall following Mass.