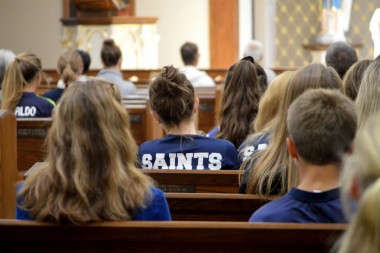 FORT WAYNE — Since the Fort Wayne high school’s founding in 1963, the Bishop Dwenger Saints have been striving to become “Citizens of Two Worlds.” One of the many ways they seek to do this is by encountering Christ in their chapel, which is dedicated to the Queen of All Saints.

On Aug. 22, 2015, the feast of Mary, Queen of All Saints, Bishop Dwenger High School staff and friends broke ground to renovate that chapel and increase its seating capacity from 70 to 284 people. On Sept. 20 construction was finalized, and the chapel was dedicated to Our Lady, Queen of All Saints, by Bishop Kevin C. Rhoades.

When Dwenger Saints enter the new chapel, they are surrounded by models of holiness: images of the heavenly saints. The chapel features 10 stained-glass windows, and the Dwenger community voted on which saints should be depicted on them. Over 50 essays with suggestions were provided to Bishop Rhoades, who chose 20 to be put to a vote. The selected ones are: St. John Paul II, St. Ignatius of Loyola, St. Anthony of Padua, St. Sebastian, St. Thomas Aquinas, St. Cecilia, St. Bernadette, St. Terese of Lisieux, St. Maria Goretti and St. Teresa of Calcutta.

Behind the altar is religious artwork portraying the saints representing Bishop Dwenger’s feeder schools. The Salve Regina, as Bishop Rhoades pointed out during Mass, is depicted in gold lettering that surrounds the chapel.

When students enter the chapel, they come face to face with the Stations of the Cross, which are originally from Sacred Heart Church in Branchdale, Pa. The altars, ambo and angel pedestals are from churches across Pennsylvania and Indiana. The chapel utilizes a missal stand from St. Mauritius in Ashland, Pa., and adoration angels from St. George in Shenandoah, among other items. The liturgical items were carefully chosen and repurposed from a warehouse that houses used liturgical items, which have now found a new home in the Queen of Saints Chapel.

At the dedication Mass, the chapel was packed to capacity. Throughout the ceremony, items for the chapel were installed in their proper place. The relic of St. Jude was laid in the altar, and the altar stone was closed. The altar cloth was laid on the altar by Marsha Jordan, superintendent of Catholic schools for the Diocese of Fort Wayne-South Bend, and Carl Loesch, secretary of Catholic education. Other items, such as the flowers, candles and crosses, were presented by Dwenger graduates, faculty and staff and supporters of the school.

In his homily, Bishop Rhoades noted that the chapel was named in honor of the Blessed Mother, and the patroness of the school. He also called attention to the saints featured on the stained glass windows. “They are our great heroes, models for us of discipleship,” he said.

He continued: “In many ways, they were very ordinary men and women. What made them extraordinary was that Christ was alive in their minds, hearts, and spirits. The Lord, in the power of His Holy Spirit, filled their lives and they opened themselves to His grace.”

Jason Garrett, class of ’88 and campus minister at Bishop Dwenger High School, said the response by students, faculty, staff and parents to the renovation was overwhelmingly positive. Many were already frequenting the chapel during the final stages of development. The ministry also saw a recent increase in participation with the sacrament of reconciliation and clubs sponsored by Campus Ministry.

He continued: “Through more access to the sacraments, Eucharistic Adoration and personal/communal prayer, all students and members of our school community will grow in their personal relationship with Christ.  It is also our hope that they invoke Mary to intercede and assist them in their walk with Christ.”