As a leading pro-life voice in the Catholic Church calls on 2020 to be a “Year of Service for Pregnant Women,” the Indiana Catholic Conference is closely monitoring legislation that would promote safer working environments for employees who are expecting a child.

Companion bills introduced in the Indiana House and Senate this month would prohibit an employer with 15 or more employees from discriminating against a pregnant worker. House Bill 1294 and Senate Bill 342 also would require employers to provide “reasonable accommodations” for their pregnant employees per a doctor’s recommendation — from offering them extra breaks in their workday to being exempt from heavy lifting.

“Passage of this legislation would allow women to be employed without the stress and fear of working in situations that could lead to miscarriage,” said Angela Espada, executive director of the ICC, the public policy voice of the Catholic Church in Indiana. “Additionally, minor modifications and freedom from discrimination could also prevent a pregnant woman from seeking an abortion because she fears losing her job.”

The timing of the proposed legislation coincides with a challenge recently issued by Archbishop Joseph F. Naumann of Kansas City, Kansas, chairman of the U.S. Conference of Catholic Bishops’ Committee on Pro-Life Activities. He called upon all U.S. bishops to join in a nationwide effort titled “Walking with Moms in Need: A Year of Service” beginning in March – the 25th anniversary of St. John Paul II’s groundbreaking encyclical “Evangelium Vitae,” or “The Gospel of Life.” The encyclical is arguably the best-known and most-quoted affirmation of the Catholic Church’s moral teaching on the sanctity of life.

“The 25th anniversary year of “Evangelium Vitae” gives us a wonderful opportunity to assess, expand and communicate resources to pregnant moms and families in need,” Naumann said.

Espada expressed hope that this will be the year for Indiana to join more than half the country in guaranteeing pregnant women reasonable adjustments in the workplace. Other provisions in the House and Senate bills include modified work schedules, temporary transfers to less strenuous or hazardous environments, and access to appropriate seating.

“These bills would promote healthy and sustained pregnancies as well as be a way to answer Archbishop Naumann’s call and provide service to pregnant women,” Espada said. 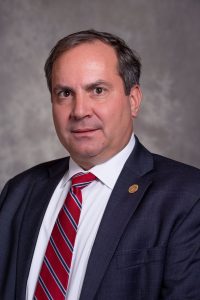 “We can do better in Indiana as a pro-life state,” said Sen. Mike Bohacek, R-Michiana Shores, one of the co-authors of Senate Bill 342. “This bill is pro-life, and it’s also proportional. We want to be pro-business, but we also want to protect working moms and their unborn children, and (with this bill) it’s fairly easy to do.”

Bohacek, a Catholic and a businessman himself, said he wants those in the business community to see that they can fulfill their obligations to their customers while ensuring the safety of pregnant employees and their unborn children.

“This bill gets it done,” said Bohacek, a member of Notre Dame Parish in Michigan City in the Gary diocese.

Indiana Gov. Eric Holcomb referenced both the House and Senate bills in his Jan. 14 State of the State speech, adding that their passage would “help more moms and their babies get off to a healthier start.”

Holcomb has made decreasing Indiana’s high infant mortality rate a cornerstone of his agenda, challenging the state to become the best in the Midwest by 2024. While progress has been made in recent years, Indiana currently ranks seventh in the United States for infant mortality and third in the country for maternal mortality, according to Erin Macey, senior policy analyst for the Indiana Institute for Working Families. She emphasized that a leading cause of infant mortality is premature birth, which can be the result of unsafe working conditions.

“There is a relationship between preterm birth and physically demanding work — things that involve prolonged standing and lifting, for instance, and mandatory overtime,” said Macey, who frequently testifies before legislative committees about issues affecting Hoosier families.

While attempts to pass similar laws fell short in past legislative sessions, Macey said she is encouraged by what she believes is a broad base of support.

“There is a strong coalition around this issue, with everyone from business groups to the March of Dimes wanting to make sure we have safeguards and modifications in place for pregnant women so they don’t deliver early or lose their pregnancies,” she said. “I definitely see momentum for these bills.”

The Senate bill will move first, with a hearing scheduled for Jan. 27 in the Senate Committee on Family and Children’s Services.

“We will be working really hard to ensure that Indiana soon becomes the 28th state to have a law like this in place,” Macey said.