Matted grass and dirt: This was Julius’ home. His companions? The bugs that crawled beside him. His possessions? A scooter used to get around and whatever clothes he managed to hang on to. With no protection from the elements, battling ajddiction, this was Julius’ life.

Previously enlisted in the military, putting his life at risk to fight for our country, Julius now found his life in a different sort of peril: unable to find the support he needed to cope with his challenges. Julius had spent some time in the homeless shelter, but he was kicked out after falling in the shower. He was considered too much of a liability to be helped, and he was left to remain on the streets.

That is, until Gunny showed up.

When Gunny learned Julius was living behind Lakeside Golf Club and Bowling Center in Fort Wayne, he immediately picked him up, scooter and all, and took him to Shepherd’s House, a long-term, residential/transitional housing center for alcohol and chemically addicted men. Julius became a resident of Shepherd’s House, where he remained for a year, leaving with his life completely transformed.

Julius is just one of the lives Gunny has impacted. 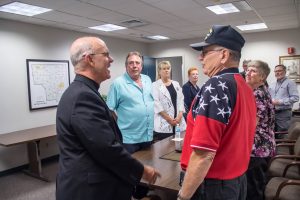 Bishop Kevin C. Rhoades thanks Jim “Gunny” Zuber in a meeting on Aug. 30.

You see, Gunny — Jim Zuber is his real name, although hardly anybody calls him that — is a combat veteran himself, joining the Marines in October 1966. Gunny served in Vietnam from 1967-1968. He was stationed on a hill about 15 miles southwest of Da Nang Air Base, and it was their mission to protect the base. It was en route to a village near there that Zuber was injured in an attack on his platoon. He was awarded the Purple Heart.

Upon returning home, Gunny worked for The Kroger Co. for nearly 35 years, retiring in 2006.

Sitting still, however, is not exactly Gunny’s style. Gunny connected with his childhood friend, Lonnie Cox, who also served in Vietnam. Lonnie and his wife, Barb, are the founders of Shepherd’s House. Gunny decided to start volunteering there a few hours a week.

Gunny shared, “The reality of being a veteran kind of enters in to my life. I want to help. I’ve been through the mill, and I can relate.”

Gunny is “is not really a big talker.” Barb, on the other hand, had plenty of stories to share of all the ways Gunny had changed people’s lives.

She shared that, once in a while, a resident of Shepherd’s House isn’t open to participating in the requirements of residency, and they have to make the hard decision to ask someone to leave. Such was the case with Evan, who had been taking drugs and was refusing to stop. Barb shared, “Gunny called me into the back room and said, ‘Barb, we should give him one more shot. I believe God wants us to give him one more shot.’ So, we did.” That “one more shot” changed Evan’s life: Eight years later, Evan is alive and well, excelling now with his own business in Indianapolis.

There are numerous stories like this. With a rock-solid faith in the power of God to transform lives (and with holy water at the ready in his office) Gunny was a strong believer in every man who walked through the Shepherd’s House doors.

Gunny would never expect any sort of recognition for his 12 years of 60+ hours-a-week service to Shepherd’s House. He’s just not that kind of guy.

His friends and fellow Shepherd’s House staff, on the other hand, are all too grateful for the impact Gunny has made, and they were not about to let that go unnoticed. And neither was Bishop Kevin C. Rhoades.

Gunny said, “This is a great honor. Something I’ve never done before. I’ve met bishops, but never one-on-one. And I was born Catholic, and I’ve been married 49 years.”

And as for his nickname? “Well,” Lonnie explained, “Jim is very well-respected by the guys. In the Marine Corps, one of the strongest guys is the gunnery sergeant. He has to be one of the toughest, but he’s also there when you need him. So the guys decided to call Jim ‘Gunny.’”

So, what will Gunny be doing in his retirement? Well, his passion for helping men rebuild their lives hasn’t left, so he’s actually staying on the board at the Shepherd’s House. Although, in his free time, he is looking forward to relaxing and enjoying his pontoon boat on the lake.

You deserved it, Gunny. Thank you for your service.