WASHINGTON (CNS) — In response to the mass shootings in El Paso, Texas, and Dayton, Ohio, Aug. 3 and 4, several U.S. bishops expressed their support and prayers for victims while also expressing outrage that these tragedies continue to occur.

Some bishops kept their reaction brief, within the 280-character confines of Twitter, but others posted links to their own statements or video responses where they were able to say more; one wrote a column for his archdiocesan website about it.

New York Cardinal Timothy M. Dolan, in a video posted on Twitter Aug. 5, said: “Like the rest of you, I’m trying hard to figure out some type of meaning and get some consolation for those who are suffering from the terrible tragedies over the weekend in El Paso and Dayton.”

The cardinal, who said he learned about the Dayton shooting — which left nine dead along with the 24-year-old gunman — in an Ireland airport at the end of his vacation.

“I’m no expert on this, and it would be presumptuous of me to think I could give some easy answers to this terrible horrific suffering,” he said, adding that at best he could recommend that it is “a time for all of us to exercise our faith muscle and try to believe that God’s in charge.”

The cardinal said he is inspired by the reaction people have to such tragedies, from the initial shock that this shouldn’t be because: “We know deep down this is not the way God intended it.” This is followed by the reaction of love and compassion to those who have been wounded, which he said is followed by a “commitment to bring some type of reform and renewal.” 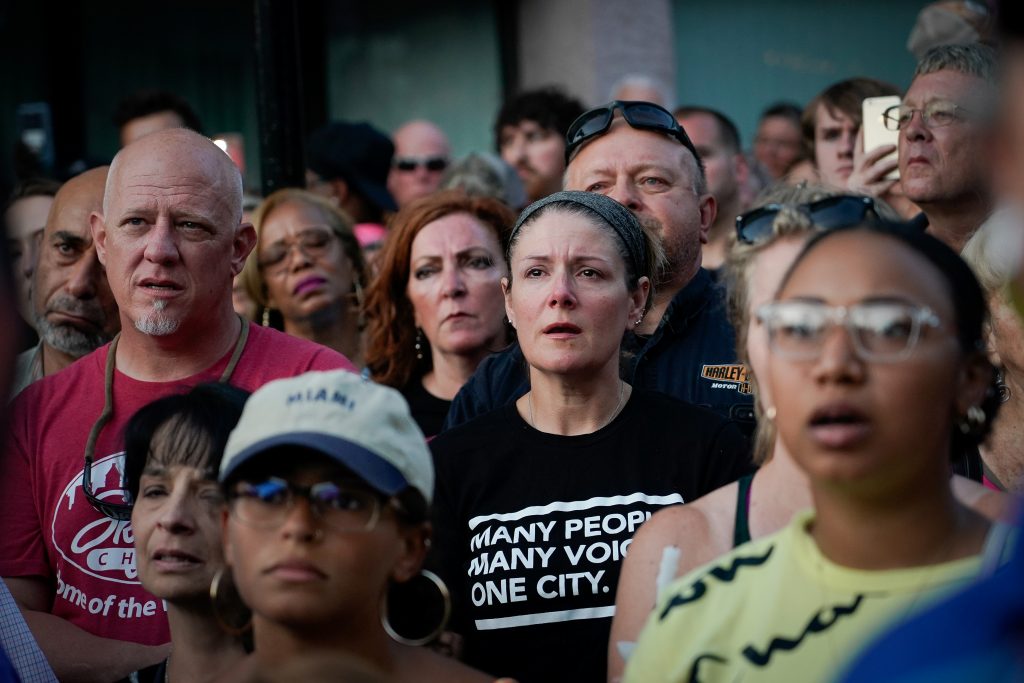 Commitment to stopping the violence is something Chicago Cardinal Blase J. Cupich stressed in his Aug. 4 statement: “Mass shootings are not an inevitability. All human beings have the right to live without violence. To behave otherwise is to advance a lie.”

He said the Chicago archdiocese “mourns and prays” for the victims of the shootings in El Paso and Dayton, but it also stands “with their loved ones demanding an end to this deadly status quo.”

The archbishop, who lives in a city that has seen its share of gun violence in recent years, emphasized that an end to tragedies that occurred in Dayton and El Paso, which now has a death count of 22, “begins with holding accountable our elected officials who have done nothing to address gun violence.”

He also said it requires holding others accountable, “including some leaders who fuel these violent acts by dividing humanity through hateful rhetoric. This must stop — along with the silence of our elected officials who have failed to condemn hate speech, for they are the very ones who have sworn to keep our nation safe.”

Pittsburgh Bishop David A. Zubik, who experienced a mass shooting in his own city in 2018 when 11 were killed at the Tree of Life Synagogue, said in an Aug. 4 statement: “Over and over and over, we grieve as a nation for the victims of mass shootings, praying for the souls of those who have died and for the long recovery of those with wounded bodies and broken hearts.”

He stressed that these prayers must “also lead us to actions that will address the complex causes of these crimes. Among those steps are limiting civilian access to high capacity weapons and magazines, addressing online sites that encourage violence, improving access to mental health care for those who may be prone to violence, and working to overcome the racism that contributes to some of these crimes.” 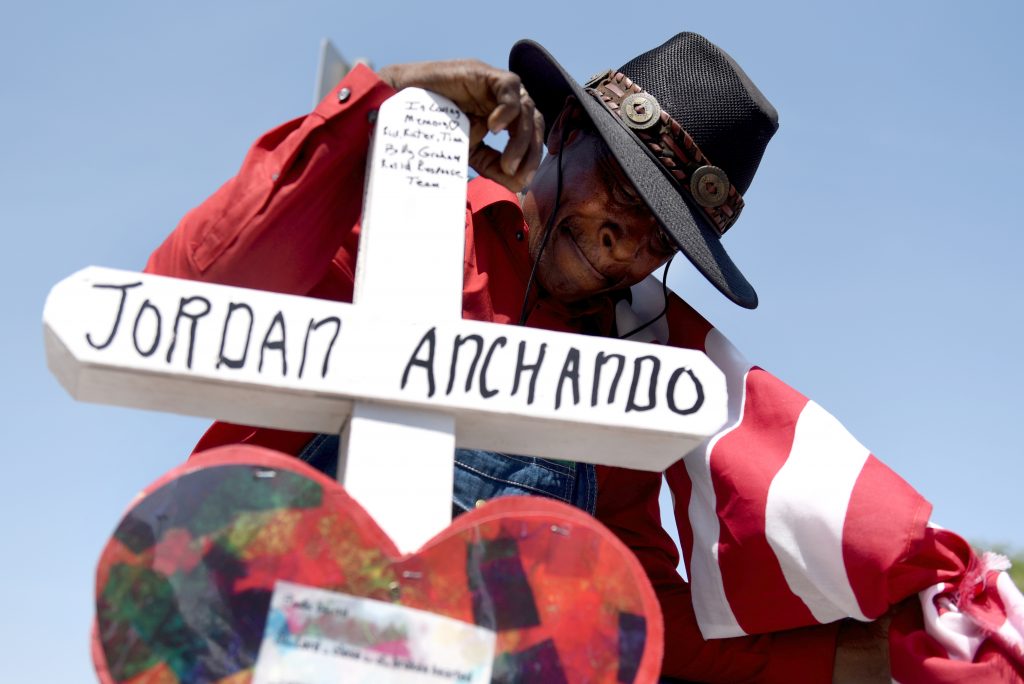 Curtis Reliford kneels Aug. 5, 2019, next to a cross in honor of Jordan Anchando, one of the victims of a mass shooting Aug. 3 at a Walmart store in El Paso, Texas. Since 1996 cross builder Greg Zanis of Aurora, Ill., has delivered free of charge more than 26,000 wooden memorials at the site of mass murders and other tragedies across the U.S. (CNS photo/ / Callaghan O’Hare, Reuters)

The bishop said the victims of the weekend’s shootings will be in his prayers and he said he also would pray for “those who hold the power to help prevent these massacres.”

Philadelphia Archbishop Charles J. Chaput also spoke from his own experience. In a column posted Aug. 5 for CatholicPhilly.com, the news website of the Archdiocese of Philadelphia, he repeated some of his remarks from his testimony 20 years ago before the U.S. Senate about the shooting at Columbine High School in Colorado in 1999, which at the time was the worst high school shooting in U.S. history.

In his testimony then, he said the problem of violence stems from “a culture that markets violence in dozens of different ways, seven days a week. It’s part of our social fabric.”

He said the recent shootings, including the July 28 shooting in Gilroy, California, which left three people dead, are “just the latest in a long pattern of mass shootings; shootings that have blood-stained the past two decades with no end in sight.”

Archbishop Chaput also said the “usual aftermath” would soon begin in response to the recent U.S. shootings, which he described as: “expressions of shock; hand-wringing about senseless (or racist, or religious, or political) violence; bitter arguments about gun control; heated editorials, earnest (but brief) self-searching of the national soul; and eventually — we’re on to the next crisis.”

The archbishop said he “saw the human wreckage that gun violence leaves behind” when he sat with parents whose children were killed in the Colorado school shooting. “

That experience taught him, he said, that “assault rifles are not a birthright, and the Second Amendment is not a golden calf.” He added that he supports thorough background checks and more restrictive access to guns but said that wasn’t the only answer.

He said his experience after the Columbine shooting also taught him “that only a fool can believe that ‘gun control’ will solve the problem of mass violence. The people using the guns in these loathsome incidents are moral agents with twisted hearts. And the twisting is done by the culture of sexual anarchy, personal excess, political hatreds, intellectual dishonesty and perverted freedoms that we’ve systematically created over the past half-century.”

Reiterating what he said 20 years ago, he added: “Treating the symptoms in a culture of violence doesn’t work. We need to look deeper. Until we’re willing to do that, nothing fundamental will change.”