Grocery shopping and Christmas-themed aerobics classes are not part of a typical high school curriculum. But at Marian High School, these are important lessons for particular students.

Marian has five additions this year, and principal Mark Kirzeder hopes to see a similar increase next school year. Not new classes, but special new students — students with mild intellectual disabilities. They are the first of the school’s Bernadette Scholars, and they are making their mark at Marian.

The Bernadette Scholars Program is separate from individualized education/resource room programs, and the 2019-20 school year marks its pilot year at the Mishawaka high school. Affectionately called “Bernies,” Bernadette Scholars are on non-diploma, certificate-of-completion tracks. They spend the bulk of the day together in shared classes. Next semester they will be further assimilated into the typical classrooms.

Integrating the five students into Marian has thus far proven to be a successful and blessed transition. 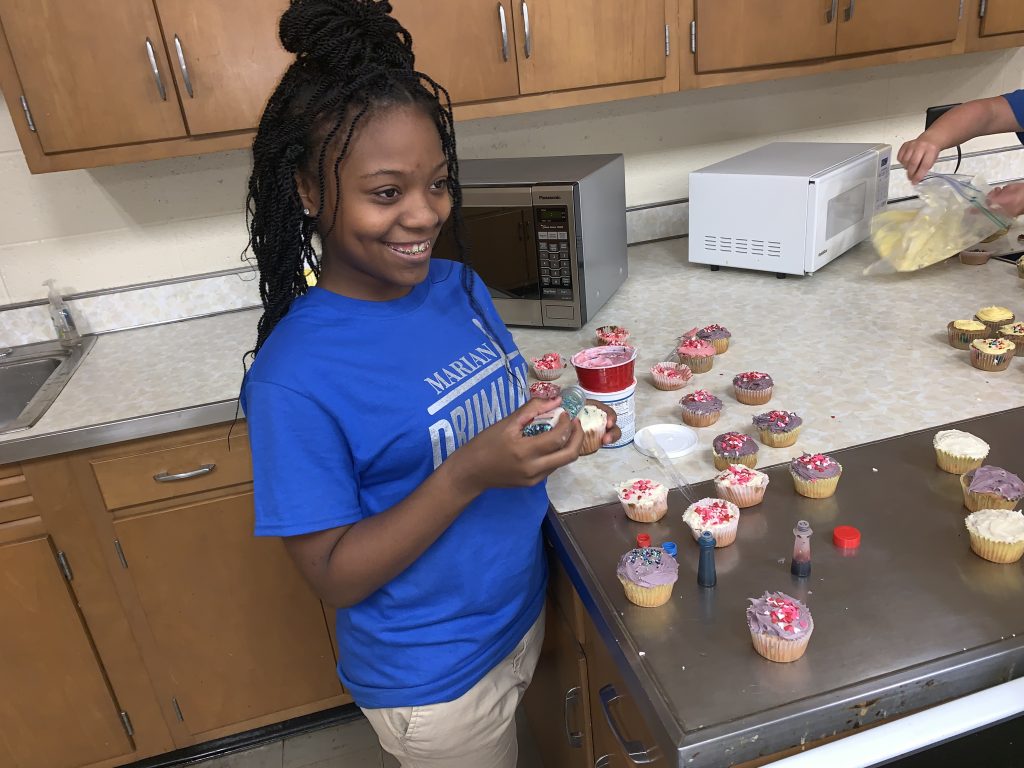 Photos provided by Katie Dyer
A’layah Newsome, one of the new Bernadette Scholars at Marian High School, Mishawaka, decorates cupcakes in the school’s home economics lab during the staging of mock “Cupcake Wars.”

According to Annie Ganser, department chairman of learning strategies, the program is flexible, aimed at meeting the students’ individual needs. “It focuses on life skills and achieving an optimal level of independence” that are vital for the students’ future.

Education for this demographic is directed toward proficiency at everyday tasks for independent living rather than higher-level academics. Students are accepted into the program on a case-by-case basis, depending on their needs and the resources Marian has available. Expectations placed on the students are different from those of typical learners as well.

In addition to Ganser, four other staff members work directly with the Bernadette Scholars. Katie Dyer is the teacher for the Learning Strategies Center. Pam Sailor is the instructional assistant, Bret Bajdek coordinates the Learning Lab and Cynthia Spalding is a teaching aide exclusively for the Bernadette Scholars. A grant from the Tippmann Foundation allowed for the creation of Spalding’s position. 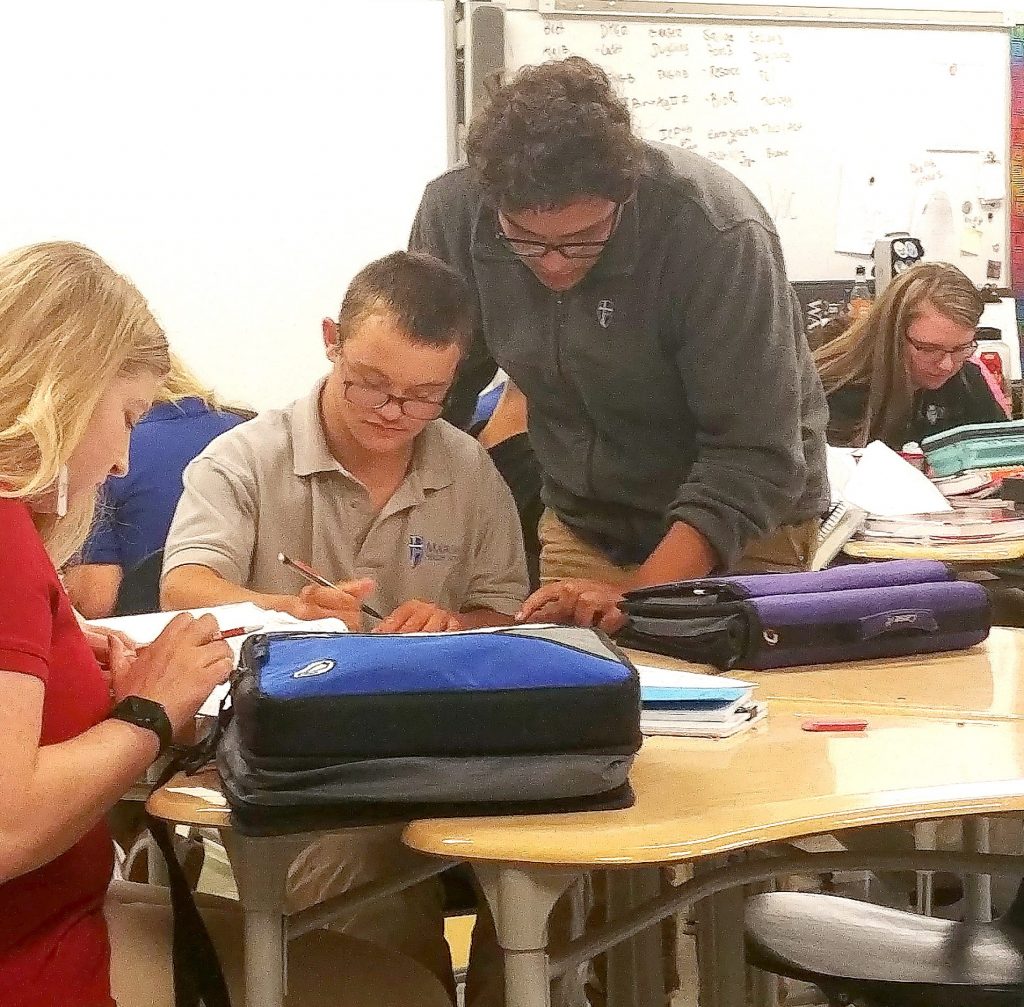 Leo Vesprini gets help on his schoolwork from classmate Yordy Rios, who took the initiative to guide him.

The staff works together to find creative ways to reach the students and help develop their potential: For example, a recent unit on meal planning and preparation incorporated health, math and community living skills into a grocery trip. Taking students out of the classroom gives them the opportunity to put the skills they are learning in action, in this case by reading food labels and comparing prices in a real-world scenario. The students find recipes, go to the store with a staff member to purchase the ingredients and prepare the meal in the home economics lab later in the week.

Although the Bernies have their own classroom and workspace, they are becoming a valuable part of the Marian community. Dyer is quick to point out that with their friendly smiles and warm hugs, each of the students brings something special to the campus.

Their interests are as varied as the rest of the student population. The boys serve at Mass within their own parishes. Choir and art are popular pastimes among the Bernies too.

Bernadette Scholar Nick Becker is freshman class vice president, and the young man with Down syndrome is an obvious leader. Cheerful and friendly, he walks the halls as if he owns the building, which is nearly accurate because he practically grew up there.

Nick is the second-youngest of seven siblings, five of whom went to Marian. When asked how he feels about his school, he said he’s “happy to be here,” — although the school day is too long for his liking.

Nick attended St. Matthew Cathedral School, a feeder school for Marian, so he already had many friends among his Marian classmates. Remarkably, the elective he chose to take was theology, and he was placed in a mainstream sophomore theology class.

Morgan Minder, also a Bernie, is on the swim team, and her teammates and coaches have been incredibly welcoming to her, she said. Leo Vesprini put together an intramural volleyball team that filled up in five minutes, and he considers himself an expert at making friends. He will approach other students and engage them in conversation or invite them to play card games.

Mary Helfrich loves anime and is involved in the club that her older sister started. She is also interested in photography, and her chosen elective for next semester is 2D art. Her classmate and fellow Bernie A’layah Newsome, a quiet student, stated that drumline was her favorite class.

Ganser believes that the presence of the Bernadette Scholars benefits the student population at large. It provides an opportunity for mainstream students to stop in and visit, thereby taking a leadership role. Many have done so, forming friendships with the Bernies. The program is “helping them understand that disability means different ability,” she said. “The (typical students) are amazed by what the Bernies can do.” She predicts continuing benefits for all students at Marian as the program increases. “When we started, Mr. Kirzeder wanted to make sure the kids would be safe, shown kindness, and that others were open and accepting.” They have been.

Dyer related stories of students taking the Bernies under their wing and encouraging them in academics. One group of students was working in the home economics lab at the same time the Bernadette Scholars were present, and mainstream girls excitedly declared that they wanted to work with them. The open-hearted invitation led to a battle of the bakers, and they hosted a version of “Cupcake Wars.” There were no losers, as all of the students learned the value of friendship and inclusion.

To teach theology, Angie Hall, the pastoral minister, set up a cozy space in her office to work with the Bernadette Scholars. It’s a small, relaxed setting that encourages the students to participate in prayer and discussion. Here they engage with Hall, sharing their thoughts about religious matters such as reconciliation and the liturgical season. In this way, all of the students are involved and none feel intimidated by a larger classroom setting.

Due to Indiana state laws, once a student is placed on a non-diploma track, they can’t be moved to a diploma track, Ganser noted. “We make sure that our families know that by opening some doors, others must close.” Although in some instances a student could handle the intellectual aspect of typical classes, the struggle with the workload might outweigh the potential benefits. So the staff at Marian works closely with families to meet the goals that each family has for their child, while looking to the future.

Potential jobs are a large part of future goals for Bernadette Scholars. The students have a work period included in their day where they spend some time restocking and cleaning areas of the cafeteria. At some point in the upcoming year, they will begin learning administrative skills such as answering phones. A great deal of importance is placed not only on teaching work skills in the program, but also how to accept criticism with grace and to arrive on time for work.